A lot of Otto Dix’s paintings from the inventive early 1920s were confiscated by the authorities in the late 1930s, and some were burned. The prints, mainly in private hands, largely survived and many of the rarest feature in this sale, from the scarce early woodcuts of 1920 to the etchings and aquatints that make up his famous series Der Krieg, printed in 1924. Otto Dix and Max Beckmann were the principal German printmakers of the postwar period. Both were in the army although Beckmann withdrew after a breakdown in 1915. Dix, on returning to Dresden, made a series of expressive woodcuts, published by Heinar Schilling as Nine Woodcuts in 1922. In time he made drypoints, represented here by five works from the Six Drypoints portfolio, also published in Dresden in 1921 by Schilling, a writer and publisher of Dresden’s Expressionist magazine Menschen. In 1922 Dix himself published a series of ten of his own Circus studies in drypoint. Lithography began to interest him in 1923 – see, for instance, the vibrant Kupplerin, or the magnificent Woman with Heron Feather, published by the prestigious Euphorion Verlag in Berlin in that year.

Dix, born in 1891, was brought up in Gera to the west of Dresden. A local prince, prompted by one of Dix’s tutors, provided him with a scholarship to the Academy of Applied Arts in Dresden where he learned the basics of painting and drawing. He came under the influence of Richard Guhr, a painter and sculptor responsible for a giant gilded Hercules sited on the roof of the town hall. Guhr’s giant was based on Ewald Redam, a famous boxer of the era, a contemporary element that might have impressed Dix.

He studied in Dresden between 1910 and 1914 before joining an artillery unit. In 1915 he became a machine-gunner. He may have enlisted, for there was a lot of enthusiasm for the war in 1914. He was wounded several times, but never seriously. At the Front he sketched and drew in an accomplished academic style, and also made brusque Expressionist landscape studies in black crayon and gouache. He was an Expressionist to start with but in 1916 began to use simplified Cubist elements in studies of French farms and villages.

In 1919 Dix returned to the Academy of Fine Art in Dresden, probably for the sake of studio space. In January of that year he was one of the founders of the vanguard ‘’Group 19’’ in the Dresden Secession. The group president was Conrad Felixmüller, an expert printer who taught Dix etching and other printing techniques. Felixmüller resigned by the end of the year on political grounds. Expressionism was seen by some – and Felixmüller in particular – as having social aims; others in Dresden saw it more subjectively. Dix was in several minds. Prompted by Dadaism, and familiar with Esperanto that he had used in wartime messages, Dix began to make cryptic paintings, woodcuts and etchings – puzzle-pictures meant to be searched and solved. He developed a liking for subtexts, for pieces of printing, scripts, tattoos and graffiti.

In 1919 Felixmüller described Dix as ‘’a broken man’’. At the first meeting of ‘’Group 19’’ Dix complained that he wasn’t getting anywhere and that his paintings were unsellable. He tried to woo the public in 1919 with romantic fantasies such as the beautiful and exotic portrait of Fritz Müller, an imagined sailor from Pieschen, which was a port on the Elbe in northwest Dresden. Dix foresaw that he would become either famous of infamous, and soon opted for infamy in the shape of a garish painting of 1920, signed DIXAV on a perfume spray, of a sex killer, played by himself in a dappled suit prancing amongst body-parts. He features in his many self-portraits as a glaring character equal to the worst that life might offer.

Dix was, by his own admission, a rugged character who had machine-gunned for years on the western front. Felixmüller, who introduced him to printing in 1919, was a younger man; and he had been learning his trade whilst Dix was at war. Felixmüller, who had ignored the call-up and finally served for a short while in a medical unit, was well-meaning. Dix may have caricatured him in the shape of the barbaric sailor F.M. who features in Matrose und Mädchen, in the series of five etchings 1922, with a hard-bitten maiden carrying a tiny handbag in what is meant to be a romantic moonlit scene. Painting may have been rich in solids but printmaking was flexible and suggestive, tolerant of tattooing and of suggestive numbering and scraps of text. It was, as Dix used it, a makeshift almost ecological art that allowed him to make do with whatever materials cropped up.

Prints were safeguards, too. In the paintings he indulged a liking for tangible items. In his notorious Kreigskrüppel of 1920, the crippled veterans wear wound medals. Their artificial eyes and replacement jawbones are stamped DRP, a national code for utility items. They walk on a fancy pavement outlined by a decorator – Dix had trained as one in his youth. Etching, by contrast, was a purifying medium, and it dispensed with the consolations of colour. Etching was quick and light where painting (as he liked to practice it) was stolid. In a number of the etched versions he omits distracting details, such as the heavily moulded window in the painted version of Suleika, das tätowierte Wunder, who features in the Circus series.

In 1923 he achieved infamy at a stroke with Der Schützengraben (The Fire Trench), a large oil painting of at least six dead soldiers, probably machine gunners, in a trench wrecked by shelling. The picture, begun in Dresden and completed in Düsseldorf, went to the Wallraf-Richartz Museum in Cologne where it was installed behind a grey curtain. It was gruesome, in the style of Grünewald, but obviously important. It toured Germany in an anti-war exhibition, was de-accessioned in Cologne because of protests and was then acquired by Dresden before being classed as ‘’degenerate’’ in 1937. By 1940 it had disappeared.

The painting would have brought viewers face to face with the ravaged dead and with their scattered equipment. There was a yellow pool with reflections, slightly off centre, meant to register angles of vision. Orientation was always an issue. In Der Streichholzhändler (The Match Seller) painted and etched in 1920, pedestrians flee a limbless beggar. The viewer, a third party on this side of the scene, must lean forward to read the labels. He liked to assert points of view and posture. Scraps of writing were there to be read, closely and at an angle. In "The Fire Trench’’ maimed heads lie this way and that.

Dix’s tactic in his art from 1919 onwards was to prompt body consciousness, even if it only amounted to a turn or inclination of the head. The sailor’s dreams in the portrait of Fritz Müller are small and mostly at an angle. Physical awareness was a step in the right direction and a reminder that observation was never enough. Vision, to be convincing, had to be mediated by touch, hence the magnified hands, familiar objects and rough materials in his figure paintings of the 1920s. This tendency, which Dix had evolved as he tried to do justice to his harsh recollections of the war, established itself later in the 1920s as die Neue Sachlichkeit (the New Objectivity). 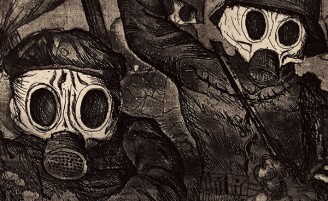