T oward the end of the summer of 1970, Willem de Kooning, by this time a mainstay of the Hamptons arts scene, attended a dinner party that would put the great artist in the presence of a woman with whom he would form an enduring and productive friendship. Though some thirty years the artist’s junior, de Kooning and Emilie S. Kilgore hit it off immediately. “I was sort of transfixed...I think I was unaware of anything else going on,” Kilgore later recalled. “And we just talked, looking straight at each other for a long, long time. And then he was leaving...and he said, ‘Am I ever going to see you again?’”

That fateful dinner party was quickly followed by a plan to meet for a bike ride several days later, meeting at the Guild Hall museum in East Hampton, and with that the two embarked on a friendship that would endure for the remainder of the artist’s life and include some of the de Kooning’s most celebrated work. When Kilgore returned to Houston at the end of that summer, the two continued a written correspondence. Over the years de Kooning made gifts of several paintings to Kilgore. With one such gift the artist included a letter that affirmed Kilgore’s central role in his life and in his body of work, “I dedicate all of my paintings to you.” Particularly touching is the brilliantly hued East Hampton Garden Party which he executed between 1975–76. The work marks the pivotal moment of de Kooning’s return to painting following some years spent dedicated to the exploration of sculpture.

An inscription on the work dedicates the painting to Kilgore in celebration of her birthday and of course it’s title East Hampton Garden Party recalls that fateful dinner that connected the artist to the woman who became his muse. Though she lived in Houston with her family, Kilgore was able to visit New York City somewhat frequently as she maintained an apartment there. The artist visited her in the city and they began attending exhibitions together. By 1972 the two had become so close that they travelled to Europe together, attending the Venice Biennale as well as Rome, the Spoleto Festival, Assisi, Perugia and finally London. Kilgore’s passion for life – visiting gallery and museum shows, theater – reinvigorated the older de Kooning.

It is perhaps no doubt then, that with de Kooning’s masterful return to painting full time he was thinking about his friend Emilie S. Kilgore. Her vibrancy and youth were contagious and the period of de Kooning’s output that corresponds to their meeting is among the artists finest work. The joie de vivre that he felt in Kilgore’s presence is translated beautifully into his work. In East Hampton Garden Party we find de Kooning at the height of his talents, saturated fields of bright blue and canary yellow, deeply expressive gestural colors, that exude the vibrancy of the artist during this period.

The singular masterwork has remained in the Kilgore family collection ever since the artist gifted it to Emilie. In represents a defining moment in de Kooning’s career and in essence his return to painting. His masterworks of the ensuing years owe much to the energy and vitality of East Hampton Garden Party, and indeed to his dedication to Emilie whose youth and passion seemed to bring out the same in de Kooning. 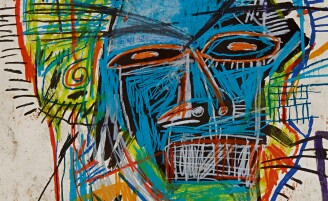