House of Mellerio: Jeweler to Queens

J uly 14, 1789: this date is known throughout the world as the beginning of the French Revolution. According to a ledger belonging to House of Mellerio, this was also the day that the jeweler sold a golden key to the Comte de Coutance for 10 livres. This ledger, as well as inventories dating as far back as 1768, are the jeweler’s oldest archives. These archives have continued to grow over the years, as the House, established on rue de la Paix in Paris, still lives on today, still in the hands of the same family from Craveggia, in the North of Italy.

The tumultuous history of the Mellerio family in France probably goes as far back as the Italian wars of the Renaissance, but the first official document proving their commercial activity in Paris dates back to 1613. This document is the famous royal warrant awarded by Marie de Medici to a number of Italian families established along the rue des Lombards, including the Mellerios, allowing them to sell “small jewelery items”, therefore granting them a small exception to the traditional monopoly enjoyed by Parisian jewelers. At that time, powerful corporations regulated the operations and customs of Parisian business, but thanks to this exceptional warrant, the Mellerios managed to escape the confines of this framework. Today, this wax-sealed document is kept at the city hall of Craveggia.

From 1613 to the Revolution, the Mellerios lived between France and Italy. The corporations tried many times to put an end to their trade privileges, but all in vain, as a dynasty of sovereigns renewed the warrant. Always marrying and often retiring in Craveggia, the Mellerios continued to maintain their jewelry business in Paris. At first, they did this without a shop. Wearing backpacks (wooden boxes divided into small compartments where jewels were kept), they would tour town fairs around Paris and royal castles.

This is how Jean-Baptiste Mellerio (1765-1850) is said to have sold a bracelet set with rubies and Antique cameos to Marie-Antoinette, which still exists today. Many elements seem to prove the veracity of this anecdote. The queen was particularly fond of cameos, which cover the entire background of her famous jewelry cabinet, and ruby was her favorite stone after diamond. The famous bracelet, reacquired a few years ago by the House of Mellerio, is indeed an 18th century jewel, set with antique cameos representing the profiles of Roman emperors. Two branches of the family were operating in Paris during this time, under the reign of Louis XVI: that of Jean-François (1746-1828), the paternal ancestor of the current Mellerios, and that of Jean-Baptiste (1765-1850).

The French Revolution forced them to return to Italy. However, both Jean-Baptiste and François Mellerio (1772-1843), who was the son of Jean-François, were eventually able to return to Paris after the founding of the Consulate. Jean-Baptiste opened a shop at the Iron Crown of rue Vivienne, and François opened his at the Palais des Tuileries, rue du Coq Saint-Honoré. His well-organized order books give an idea of his high-ranking clientele during the “Old Regime”, among which were the Comte and Comtesse Octave de Segur, the Marquise (later Duchess) de Tourzel, former governess of the royal children, and her daughter, the Comtesse de Bearn, the Craufurds -who organized the flight to Varennes, the Duc and Duchess de Gramont, the Comtesse de Boigne, and Madame de Souza, Talleyrand’s mistress.

We also see the names of the imperial family: Empress Josephine, the Queen of Holland, Princess Elisa, Caroline and Pauline. At that time, the House of Mellerio specialised, among other things, in the trade of antique cameos, a newly fashionable genre of jewel that captured the imagination of all the princesses and noble women of the time.

The years of the Restauration and July Monarchy were among the most glorious. The Bourbons were back on the throne, and the clientele of the House of Mellerio had regained its former wealth. Mellerio supplied Louis-Philippe, Duke of Orléans, as well as his mother, wife and sister, with sumptuous jewels, including a set of emeralds made piece by piece, while the Duke of Bourbon, last prince of the House of Condé, offered diamonds to his mistress, the scheming Baronne de Feucheres, and Monsieur de LaFayette also bought cameos for one of his granddaughters. For the first time, Mellerio ventured into the world of arts in 1815, when Carlotta Grisi, a famous dancer who created Giselle, as well as an actress named Rachel, bought jewels at the Mellerio store on rue de la Paix.

1848 marked a new turning point. France once again became a Republic. François Mellerio handed the company over to his son, Jean, and the latter decided to travel to Spain to build a new clientele. He later became one of the jewelers of the royal family, and met Eugénie de Montijo, who remained a faithful client when she became empress of the French people. The Imperial years were lavish. During the Second Empire, Paris was a pageant of crinoline dresses designed by Worth, while jewels by Mellerio, Worth’s neighbour on the rue de la Paix, adorned the noble women of the Tuileries court.

The Empress bought pearls. Mathilde Bonaparte bought a magnificent diamond rose. The wealthy families of Russia also entered the scene, the most famous being the princes Yusupov, even richer than the Romanovs. The princess dowager also lived in Paris and bought fabulous emeralds, which were found in the treasure of Sultan Abdul Hamid II at the beginning of the 20th century. Her son, Prince Nicolai Yusupov, also collected precious diamonds, which Jean Mellerio sourced for him all over Europe.

In 1870, at the fall of the Second Empire, the international reputation of the House was too firmly established to be affected by the end of the imperial regime, as shown by an order from the King of Holland. Widower of a princess of Württemberg, William III remarried Princess Emma of Waldeck and Pyrmont in 1879, with whom he had one daughter: Wilhelmina, the great-grandmother of the current king of Holland. 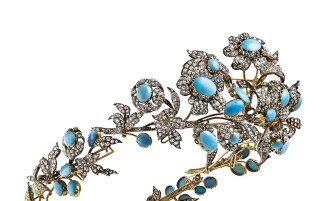 Jewelry
Mellerio: Treasures from the Collection of France's Oldest Jeweler

A faithful client of Mellerio, in 1888 the king ordered a set of rubies and diamonds in the Henri II style as a Christmas gift to his wife. A diadem, a necklace, brooches, bracelets, earrings and even a fan were set with diamonds and large Burmese rubies. Probably one of the most beautiful ruby suites in the world, this remarkable commission remains in the possession of the royal family of Holland.

At that time of its manufacture, the name of Mellerio was so famous in the world of jewelry that every high-ranking personality visiting Paris would stop at the store on rue de la Paix. The sale ledgers thus mention Queen Victoria, the king of Italy, the czarinas of Russia, kings of Bulgaria and also a number of French-speaking Indian princes, such as the Maharaja of Kapurthala, who ordered a golden hair ornament designed as a peacock, enameled and set with diamonds. Since then, many generations of the Mellerio family have continued to guide their House, which is undoubtedly the first in the history of Parisian jewelry.