Mellerio: Treasures from the Collection of France's Oldest Jeweler

T his year, Sotheby’s Paris will celebrate one of the world’s oldest jewelry houses, Mellerio, with two events charting the illustrious history of the 407-year-old Parisian Jeweler: an exhibition of seventeen treasures from Mellerio’s heritage collection and the sale of twenty-five pieces from the jeweler's last thirty years of the 20th century, to be offered in the Joaillerie Paris auction on 11 June.

Founded in 1613, the fourteen-generation family-run jeweler can claim Marie de Medici as its first client, Marie Antoinette as its most famous, and has created heirlooms for the greatest dynasties around the world, from Queen Victoria and the Maharaja of Kapurthala to the Queens of Europe and the Tsarina of Russia.

Over the course of 400 years, the Mellerios’ destiny was closely intertwined with that of France. The queens of each of Europe’s royal houses commissioned pieces from the house, as did countless leading writers, composers, bankers and industrialists. Unquestionably the oldest family of jewelers in France, the house is today headed by Laure-Isabelle Mellerio, who represents the 14th generation of a family whose history can be traced back as far as the 16th century.

Testament to Mellerio’s long history and unique savoir faire, the exhibition and the jewels to be auctioned embody the house's distinctive style: jewels of exceptional craftmanship and timeless beauty, enhanced by contrasting colourful gemstones and fine materials. The exhibition will showcase some of the most important commissions by the jeweler, including an 18th century antique cameo and ruby bracelet most likely sold to Marie Antoinette by Jean-Baptiste Mellerio (1765-1850) in 1780.

Another highlight is an articulated and transformable peacock feather brooch with calibrated diamonds, sapphires and rubies surrounding a large emerald, purchased in 1868 by Empress Eugénie, who met Jean Mellerio at the Spanish court and became one of the jeweler's most faithful and fervent supporters after her wedding to Napoleon III. This masterpiece of jewelry is testament to one of the greatest creative eras for the jeweler, following its participation in several international exhibitions, which showed Mellerio’s innovative creations to much of the world.

One of Mellerio’s emblematic motifs, which still appears in its creations today, the peacock can be found in another sumptuous piece to go on view: a pearl, pink gold, diamond and enamel choker from 1900, a time when the jeweler was high in demand among the European elites. Spanning 240 years of Mellerio’s history, the exhibition will also feature an 1825 citrine and yellow gold parure, a diamond and turquoise ﬂoral tiara from 1860 and a 1960s coral and diamond clip.

In addition to this extraordinary heritage, the family has kept a unique archive, revealing the intimate relationships the Mellerios built with their clients. These women were the fashion and society icons of their time, and the jewels they commissioned were perfect encapsulations of their era.

Today, Mellerio’s jewels are designed by Laure-Isabelle Mellerio, the 14th generation of the Mellerio jewelry dynasty. She places a creative emphasis on color – with subtle shades of sapphire, emerald and chrysoprase paying tribute to the beauty of the Borromean Islands, a return to the origins of her family, whose native village was a few kilometers away from the Lake Maggiore.

Additionally, the House of Mellerio also offers completely bespoke designs, which can also occasionally incorporate precious stones from their clients’ own collections. Reimagining and remaking existing jewels in this way has always been an intrinsic part of Mellerio’s heritage, but takes on an additional significance in the contemporary world as a way to help minimise environmental waste. 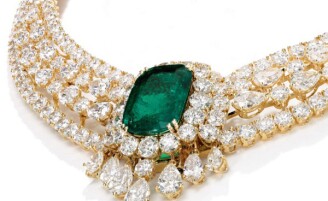