F ans of literature will find a truly exciting lot in Sotheby’s Summer Miscellany sale (28 July to 4 August), namely the final-draft typescript of Breakfast at Tiffany’s, Truman Capote’s acerbic and brilliant novella first published by Random House in 1958. With hand written notes, revisions and deletions, this is a piece of literary history like no other — for it features the final creation of one of modern comedy’s great characters and indeed names, Holiday ‘Holly’ Golightly.

The character at the heart of the story, she is an audacious, footloose and fascinating protagonist living a somewhat shady life seemingly as an escort for rich older men and, it turns out, an unwitting criminal.

Holly became, in his own words: “a symbol of all these girls who come to New York and spin in the sun for a moment... I wanted to rescue one girl from that anonymity and preserve her for prosperity."

One must wonder, had she remained Connie Gustafson — one name among Capote’s 100 names for the character throughout writing only changed in this final draft — would the character have had the same level of impact to become the icon portrayed in the 1961 film?

The answer must be no, for as well as ‘Connie Gustafson’ might work for a child bride escaping her obligations in the backwater town of Tulip, Texas, it flounders as a chic girl-about-town in New York City. The name doesn’t evoke freedom or a wild nature, but visions of a sullen midwestern housewife trudging through life.

Instead, Holly Golightly was ‘born’ — a bouncy, comedic name in tune with the flighty nature of the character, as someone who would not be caged, with a suggestion of promiscuity mixed in.
It is considered that Holly’s freedom seeking character is in part based on Capote himself, on socialites often found in Manhattan in the 1940s and 50s such as Gloria Vanderbilt, and almost certainly on his own mother, who abandoned him as a child to find fame and fortune, only to reappear many times heartbroken by her latest beau.

In trying to capture the nature of New York’s cafe society, and explore his own childhood heartache, Holly became, in his own words: “a symbol of all these girls who come to New York and spin in the sun for a moment... I wanted to rescue one girl from that anonymity and preserve her for prosperity."

Holly’s story is captivating because the reader learns of it slowly, the narrator teasing us with reminiscences of a bygone decade, in a city that has changed both physically — buildings removed or replaced, such as the stables in Central Park — and metaphorically, in that Holly’s presence is like a wild animal in both the narrator’s past and present life.

This sometimes strained relationship between Holly and the narrator becomes a friendship that can falter or become ferocious one day to the next. Some critics have described this as a subversive breakaway from the expectation placed upon young adults in the 1950s, that of love, marriage and the ‘nuclear family’, with Holly’s gift of the birdcage ironically representing her own freedom.

This platonic relationship is clear in the book, but, due to the narrator’s assumed homosexuality and the ambiguous finale in the novella — an unsatisfying ending for Hollywood — was altered in the film to become a heteronormative love story between Audrey Hepburn’s Holly, and Paul played by George Peppard.

The novella also beautifully utilises Capote’s famous portrayal of grotesques, especially when talking about the older men in Holly’s life — the men she takes money from, such as the incarcerated mob boss Sally Tomato, or the millionaire eccentric Rusty Trawler who is described as “a middle-aged child that had never shed its baby fat”.

Another grotesque is the talent spotter O.J Berman who correctly assumes Holly is “a phony”, but is himself described by Capote’s narrator as “A creature... His shoes sported elevated heels; without these added inches, one might have taken him for a Little Person. His bald, freckled head was dwarf-big: attached to it were a pair of pointed, truly elfin ears.”

The juxtaposition between hideous males attempting to weild Holly’s allure like talent-spotter Berman, or to hide their true nature like Rusty deflecting his homosexuality by marrying beautiful women, portrays Holly simply as a tool, albeit one that is at the same time using them to her own advantage.

Yet in the end, her nonchalant attitude toward taking advantage of her power over men comes back to haunt her. She must flee, and once again becomes the transient and uncaged woman on her calling card: “Holly Golighty, Traveling”. 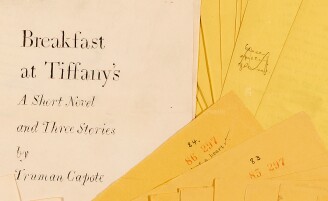