F ounded in the 1950s, Karuizawa was a distillery whose future was always uncertain, not least because it was located at the foot of the active volcano, Mount Asama, Nagano Prefecture in the very centre of Japan’s main island of Honshu (本州).

How to Start the Ultimate Whisky Collection (7 Key Steps)

Karuizawa began its life under the ownership of Daikoku-Budoshu, a Japanese wine company with vineyards in Nagano who were looking to expand their portfolio. Karuizawa’s malt was destined to be used in blends and bottled under the name Ocean. Malted barley was difficult to come by in Japan, so Karuizawa began to buy their malt from Scotland. They imported Golden Promise, the same varietal used at Macallan at the time, and once distilled on their small stills they tended to mature the distillate in high quality sherry casks, which also sounds very similar to Macallan’s process. The quality of Karuizawa’s output was high, so high in fact that whisky sales of Ocean began to outperform Daikoku-Budoshu’s wine sales by both volume and value.

As sales increased, Karuizawa’s owners decided to change their company name to Ocean Whisky Co. Ltd to represent their leading brand. Not long after, they merged with Yamanashi Distillery owners Sankrau Shuzo to become Sankrau Ocean. With two malt distilleries now in operation, Karuizawa and Yamanashi were put to a taste test to see which distillery should be chosen as Ocean’s primary outlet. Karuizawa’s whisky was considered far higher quality and became the company’s leading distillery until Yamanashi was converted into warehousing in 1969.

Karuizawa’s production continued throughout the 1960s and began to gain some popularity in the 1970s, however, similarly to Scotch, Japanese whisky went through a decline in the 1980s with a drop in sales across the country. Sankrau Ocean changed its name to Mercian in the 1990s and began to focus on single malt production from Karuizawa, however this may have been too little too late, and on 31 December 2000 Karuizawa Distillery was mothballed and closed its doors for the last time. The following year a 12 year old Karuizawa was awarded Gold at London’s IWSC and marked the beginning of Japanese whisky’s rise to global popularity.

Mercian was absorbed by Kirin between 2006 and 2010, but there was no hope in sight for Karuizawa distillery’s return to production. Its remaining inventory of only 364 casks was sold to a company by the name of Number One Drinks, the oldest among them being Cask #5627, filled in 1960. When this whisky was released in 2013 at 52 years of age it was the oldest Japanese whisky ever to be bottled and the most expensive whisky ever to be sold when it retailed for 2 million yen, double that of the Yamazaki 50 year old which previously held both records.

Karuizawa Distillery was finally demolished in 2016 and so ended a legendary era in the history of Japanese Whisky. 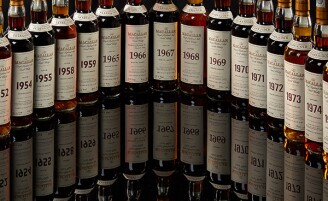