Garech Browne and the Riches of Luggala

T hese words, spoken by John Hurt in John Boorman’s 1991 short film I Dreamt I Woke up, epitomise the passions that came to symbolise the life and achievements of Garech Browne. The second son of Lord Oranmore and Browne and his wife, Oonagh Guinness, Garech was to become a great champion of Irish art, poetry and music, actively promoting them against a tide of modernism and internationalism that was flowing into Ireland in the late 1950s and 1960s.

Born at the dawn of the Second World War Garech’s childhood was spent divided between Castle McGarrett in Co. Mayo where his father farmed and Luggala, before a chequered schooling in Switzerland and Bryanston, Dorset where he was sent on the suggestion of Lucian Freud. It was to be his early experiences in Luggala, the lavish entertaining undertaken by his mother, and formative years hearing musicians and poets across Ireland and in Dublin that would shape his life.

Little educated but intelligent and astute, his eccentricity and shyness could be misconstrued for an arrogance and snobbery under which lay great sensitivity; ‘He hadn’t rejected his background outright – far from it – but combined the aristocratic and the native, so that these Yeatsian polarities could truly integrate and flower’ said Eamon Delaney, son of Garech’s old friend Edward.

In 1959, with his friend Dr Ivor Browne, Garech began the process of creating his own record label from his small mews flat on Quinn Lane and it was here that Claddagh records was born. His passion for traditional Irish music and spoken word found resonance within the country, their first album of pipe music played by Leo Rowsome sold out and the label went from strength to strength, with the poets of mid-century Ireland, Seamus Heaney, Ted Hughes and Samuel Beckett promoted alongside Paddy Moloney’s newly formed Chieftains, all gaining success.

But it was Luggala where Garech loved to spend time and entertain. He inherited the house and estate in 1970 from his mother who had been given it by her father, Ernest Guinness, as a wedding present. Luggala was to become a regular haunt of artistic talent in the ensuing years, the visitor’s book a Who’s Who of painters, musicians and poets, a stage for actors and directors.

The lots offered here are on the whole very much a reflection of Garech Browne’s own collecting taste and represent a glimpse into his character. An unrivalled collection of Claddagh rings, several 18th century Irish rosaries, decorated decanters and silver wine coasters which have survived the legendary parties; a fragment of trim from Queen Victoria’s state coach a nod to Garech’s preferred mode of transport as a younger man.

Exquisite pocket watches and fobs, enameled and jeweled cufflinks, the accessories he chose to adorn his London made suits sit here, alongside the Orders of St Patrick owned by his father.

In 2011, following a visit to Luggala the Marquis of Huntley, husband of Garech’s niece Catheryn, perfectly summarised both the place and the man;

‘I have been lucky enough to visit houses in wild and wonderful places before but none can compare. It felt to me as if a higher hand has gently placed the fragile little building in the heart of this most sensational of vistas – as if they had just stooped to place it in there in the hollow of the parkas an artist might reach across a canvas to deliver his brushstroke of genius. Your commitment and love for the place echoes between those hills for all to see and hear and I know, because I have been told, that your active and scholarly contribution to the arts has been a constant in the social pulse of the house for many years. The inspiration and guidance you have shown must be all the greater for the theatre in which you perform.’ 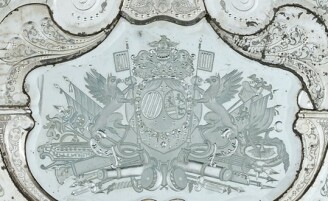