Four Modernist Painters at the Forefront of Irish Modern Art

R oderic O’Conor, Walter Osborne, Sir John Lavery and Jack B. Yeats are luminaries of Irish Modern art. While individual in their approach, each can be singled out for their new and innovative stylistic vocabularies, placing them in a broader, European aesthetic context, contrary to the traditions of Irish academic art at the turn of the 19th and early 20th centuries. The Brian P. Burns Collection has a number of outstanding works by each of these artists, which testify to their central place within the development of Irish modernism.

O’Conor is posthumously regarded as one of Ireland’s most international artists; he was an innovator and a pioneer, a collaborator of Gauguin, and at the centre of the French avant-garde. He lived and worked in the artist’s colony of Pont-Aven, Brittany and later moved to Paris. His radical style appears most explicitly in his expressive application of oil paint and his ‘striped’ decorative technique of contrasting colours. His colour palette was similarly revolutionary in the intensity of its saturation, predating and anticipating the Fauve’s modernist use of colour. The late art critic Brian Sewell remarked, ‘the astonishing thing is… when you look at the earlier work and you say ‘Oh, yes, O’Conor’s been looking at Van Gogh…Gauguin…Serusier…and you check the date, you find this is not the case that in fact it is the other way around. He arrived at painterly solutions long before other people.’ (Larry Powell, The Discovery of a New Master: Roderic O'Conor, p.152)

The National Gallery of Ireland's recent exhibition, Roderic O’Conor and the Moderns: Between Paris and Pont-Aven (July-October 2018), juxtaposes O’Conor’s work alongside Van Gogh, Gauguin, Cuno Amiet and Armand Seguin and highlights O’Conor’s immense contribution to the daring experimental techniques of the Pont-Aven group which transformed European art in the late nineteenth century.

Osborne was born in Dublin and was the son of animal painter William Osborne (see lot 67). He trained at the Académie Royale des Beaux-Arts in Antwerp from 1881-83 and subsequently travelled to Brittany. His exposure to France influenced his genre paintings of the ordinary every day; he was heavily inspired by French Naturalism and Social Realism, notably by Gustav Courbet and Jules Bastien-Lepage. Osborne was amalgamating the movements he encountered in France: Naturalism and Realism informed Osborne’s lifelike renderings of figures, which he juxtaposed with his looser, more ‘Impressionistic’ articulation of background scenes.

In the 1890s, Osborne returned to Dublin and became a highly influential teacher at the Royal Hibernian Academy, exposing future generations of Irish artists to artistic trends on the Continent (a prominent pupil being William Leech, see lots 14 and 33). He died prematurely aged 44, at the height of his burgeoning career.

Lavery was born in Belfast, and became a highly successful portraitist, war artist and painter of modern life. He was orphaned at the age of three and grew up with relatives in Scotland. In 1881 he enrolled at the Académie Julian in Paris and was influenced by the naturalist painter Jules Bastien-Lepage. Within two years, he moved from the urban ateliers of Paris to the artists’ colony of Grez-sur-Loing and became a lead figure of the new naturalist school of painting.

In 1891, Lavery visited Morocco which turned into a lifelong attachment to the country. He later bought a small house near Tangier, which became his winter studio over the next 20 years. ‘The strong light, cloudless sky, white walls and bright colour of Arab dress helped to cleanse his eye after sustained periods of studio portraiture. Within a few years of visiting Morocco for the first time, the light sable sketching of his Glasgow period gave way to a richer and more sensuous application.’ (McConkey, ‘The White City - Sir John Lavery in Tangier,’ Irish Arts Review Yearbook, 1989-90, p.60).

In London, Lavery set up the ‘International Society of Sculptors, Painters and Gravers’ with Whistler who became its president (replaced by Rodin after his death), which advanced the causes of modern art in Britain. Lavery was a highly feted painter in his day, with regular exhibitions at European salons and honoured with a one-man exhibition at the Venice Biennale in 1910. Over a long career, he is celebrated for his portraits, landscapes and work as an official War Artist, with a rich and expressive painting technique.

Yeats’ early career is defined by his illustrations and watercolours which draw heavily on his experiences in London and Sligo of circuses, fairs, sporting arenas and bustling ports. In the 1920s, Yeats’ technique dramatically changed. He began to paint in an expressionist manner, with a sense of kineticism and freedom using rich and contrasting hues, for which he has become best known. He explored the expressive power of paint, utilising the viscosity of oil paint, painting loosely with impastoed strokes. His later works draw on his memory and possess a strong sense of romantic enigma in which the unison of man and landscape verge on abstraction. Their meanings not always explicit, Yeats said that ‘a picture does not have to be a translation.’ (Bruce Arnold, A Concise History of Irish Art, 1968, p.134).

No other artist came to embody the Irish spirit as profoundly Yeats; yet simultaneously his paintings possess a universality which means they resonate far beyond Irish borders. As Samuel Beckett wrote, ‘Yeats is with the great of our time... because he brings light, as only the great dare to bring light, to the issueless predicament of existence’ (Séamus Brennan, The Work of Jack B. Yeats, 2007). 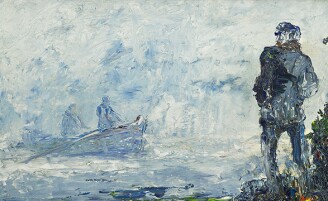