Finery on the Rhine

F rom a palatial villa with a terrace overlooking the Rhine, Sotheby’s will begin holding auctions in Germany from September. The Palais Oppenheim in Cologne, built in 1908 and recently refurbished, will serve as the company’s new headquarters in Europe’s largest economy, hosting exhibitions of art and the sale of luxury items.

The auction house characterises its new location as a vote of confidence in the German art market, which has shown surprising strength, even during the pandemic. New collectors are flocking to online sales: Sotheby’s notes that 40% of its German bidders and 30% of German buyers at 2020 auctions were new customers.

“We are noticing new collectors everywhere, but in Germany it is a particularly marked increase, perhaps because Germany, as a more traditional market, has experienced an upswing through digitisation and can now keep up with some other European countries,” says Franka Haiderer, Sotheby’s chair and head of Germany. “With online sales, the inhibition some people might have about bidding at live auctions is not a factor and people who are interested in art, but who might have previously shunned auction houses, are taking part.” 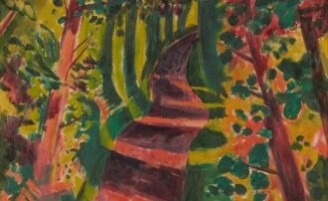 The first auction – Modern & Contemporary Art Online, from 10–17 September – will feature works by artists including Otto Piene and Markus Lüpertz. From 19–26 November, a second sale, a cross-category sale, will feature works by young artists working across fine art, design and photography, many of whose art has not appeared at auction before. Additionally, an auction to be staged on 15–21 September, titled Life is Beautiful (Das Leben ist schön), will be devoted to luxury goods such as handbags, jewellery, watches and sneakers – an area of growth for Sotheby’s globally.

Given the size of the German economy, the market still accounts for a relatively small proportion of the world art market – just 2% in 2020, according to the annual art market report by Art Basel and UBS. That compares with 20% for the UK and 6% for France. Domestic dealers complain about hurdles and costs, such as the obligation to contribute to artists’ social security, the absence of a reduced rate of VAT for art, and bureaucracy relating to the Cultural Heritage Protection Law of 2016.

“Germany is traditionally a lower-priced auction market, but new collectors are paying much more,” says Clare McAndrew, an art market economist and author of the Art Basel/UBS report. “There is a young, high-net-worth, high-spending and active new generation of collectors, and a very strong contemporary art market.”

Haiderer is optimistic that the auction market will continue to grow. “Prospects for the future are good,” she says. “Interest rates are low. People are looking for a certain diversification of assets.”

Cologne is the traditional hub of the German art market. And its proximity to Belgium, the Netherlands and Luxembourg in a densely populated area of Europe adds to the city’s appeal. “Logistically, it is perfect,” Haiderer says. “From Cologne, we can also bring in customers from the Benelux region and Scandinavia.”

“There is a young, high-net-worth, high-spending and active new generation of collectors”

It is also home to the world’s oldest art fair: Art Cologne. Founded in 1967, the fair has faced numerous crises over the past 20 years, as well as competition from newcomers such as Frieze. But the 2019 edition, the most recent, attracted 57,000 visitors. For Yilmaz Dziewior, the director of Museum Ludwig, the fair plays a critical role in Cologne’s reputation as an art hub. “It has been very successful in developing new formats for young galleries,” Dziewior says. “This supports my work greatly. The fair also has a friends’ circle, which buys contemporary art for the Museum Ludwig and other Cologne museums.”

Cologne boasts some of Germany’s leading museums – among them the Museum Ludwig, which opened in 1986 to show the collection of Peter and Irene Ludwig. As the biggest city in the Rhineland, it is at the centre of a region with a long tradition of art collecting and is home to a number of Germany’s best-known artists, including Gerhard Richter, who has lived there since 1983.

After Berlin became the capital of a newly reunified Germany, some galleries moved from Cologne or set up satellite dealerships there. Berlin is now home to an estimated 8,000 artists from all over the world. But Manuela Alexejew, who collects with her husband Carlos Brandl and has filled their Berlin home with works by artists including Otto Dix and Yayoi Kusama, says she is still always happy to visit Cologne.

“Cologne has fantastic collections,” she says. “It has always been a region of serious collectors with a lot of passion and it always impresses us.”

Dziewior agrees. “There is an older generation who is very active, but there are also a lot of younger collectors,” he says. The friends’ circle of the Museum Ludwig, the Gesellschaft für Moderne Kunst, has an internal group of younger collectors called Junge Ankauf. Dziewior meets regularly with the group to discuss contemporary art.

Among its members is Geesche Arning, a 45-year-old artist and collector. “Everyone can make a presentation about the artist they advocate and we decide among ourselves what to buy for the museum,” she says.

For her own collection, Arning shops regularly at Cologne galleries where openings, she says, are “lively and colourful with a lot of young guests”. She is also a regular visitor to Art Cologne, saying “it is a good way to get an overview”.

This year’s edition, postponed from the usual spring date because of the pandemic, will take place from 17–21 November. Haiderer says Sotheby’s is planning to time some auctions to coincide with it, and will feature “cutting-edge works by young artists and designers”.

“We very much hope,” she adds, “that the Palais will become a place for collectors – established and new ones – and art lovers.”