By Sotheby's
As number of works by leading contemporary artists are offered for sale in Contemporary Art Online, we look at five pieces that demonstrate the breadth of contemporary painting practice; and highlight artists pushing the boundaries of their medium to create powerful imagery within the traditional genres of still life and portraiture.

Alluding to the Old Master tradition of nature morte, Katz often turns her gaze on parts of the body, domestic objects, food, fruit and plants – rendering them in a repeat pattern. “Because I work in a representational mode there is an assumption about narrative, that the work is ‘about’ something, but that’s not what motivates me. Themes and motifs are generated by firstly, some form of experience, and then, a method of translation.” – Allison Katz.

Keith Coventry is a painter who travels between abstract and figurative depending on the message he wishes to convey. Inspired by Walter Sickert’s Echoes of Albany, which comprised 100 paintings recording daily life in 19th Century London, Coventry produced his own series in homage to the controversial opus. Like Sickert, Coventry is no stranger to tackling social commentary through the medium of oil painting: his Estate Paintings, for example, recall the Modernist language of Mondrian and Malevich, with carefully composed shapes laid over a uniform white ground. It is only through the title that the identity of the geometric footprint is revealed; a council estate, the likes of which populate swathes of urban neighbourhoods throughout post-war Britain.

Andrew Grassie’s creates images by copying photographs, but they are not Photorealism in the traditional sense of the word. Using an official NASA portrait of the celebrated astronaut, William F. Readdy, Grassie revisits significant moments in history, and in doing so investigates the medium his chosen source images are made in. He recreated famous artworks by John Martin, Henry Moore and Barnett Newman as part of an imagined ‘rehang’ of Tate Britain in which he photographed works from the collection in the gallery and then made a tempera drawing from the photograph. The effect is a visual journey through history, mimicking the style of painting’s greats.

Brian Calvin’s portrait are both other-worldy and cartoon-like, showing figures and faces with exaggerated features that signal the mood of his youthful protagonists. The California-based painter maintains he is uninterested in narrative, though wants his figures to be true to life: “I’m striving only for believability, the sense that there could be a soul in there. I try to achieve this and then get out of the way.” Comparisons can be drawn with Alex Katz and Tom Wesselmann, and the Los Angeles-inspired Pop palette of David Hockney. 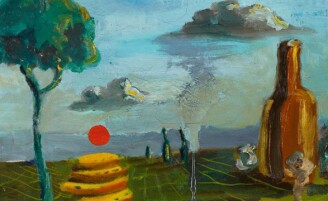