Born in 1934 in Staffordshire, Ewen Henderson is one of the most important and influential British sculptors of his time. A pioneer of clay, Henderson sought to expose pottery and ceramics as a legitimate medium for abstraction. Throughout the 1980s and 1990s, his earthy formations reveal a fascination with alchemical processes and commitment to the capturing of material change and decay. S|2 London will feature an exhibition of Ewen Henderson's work from 20 July - 21 September.

Henderson completed his National Service with the Royal Air Force and worked in a timber company in Cardiff before he made the decision to study art formally. He took evening classes alongside his job before enrolling on a diploma course at Goldsmith’s College and subsequently studying ceramics at the Camberwell School of Art under Lucie Rie and Hans Coper. While Rie is famed for her smoothed, elegantly symmetrical forms, Henderson favoured splintering and disproportion. Abandoning the potter’s wheel, he worked freehand and thereby gained greater freedom to manipulate clay and experiment with form.

The artist described clay as ‘fluxed earth’ and saw pottery necessarily as a form of abstract sculpture whose material transformation and disintegration he sought to capture and celebrate. His works abound with richly textures and geological crusts characterised by green, blue and pinkish patinated surfaces. Henderson began by making vessel forms but, moving away from the received, traditional uses of pottery, he expanded and collapsed the everyday receptacle into a site of suspension. He once claimed: “My present work is obsessed with edges, points of change, endings. It explores the significance of what is broken, torn or cut […] it is a kind of drawing in three dimensions. I start with fragments – familiar, found, improvised – and then build up to complex structures.” The roughness of his sculpture can be seen to have the same spontaneity and vigour as a sketch. Beyond his built up layers of clay, paper and grog, Henderson seeks to freeze – or rather, fire – the transience of matter.

For most of his life, Henderson taught at Camberwell School of Arts and Crafts, Goldsmith’s College and the North London Collegiate School, whilst developing his reputation and recognition on the international stage. Both medium and subject, Henderson’s ‘fluxed earth’ has become a source of great curiosity in the United Kingdom and abroad. There have been numerous exhibitions on the sculptor either showing him alongside British sculptors and ceramicists or unveiling his works as the product of a unique talent.

Ewen Henderson’s work can be found in the permanent collections of some of the world’s major museums such as the Victoria and Albert Museum, London, The Museum of Modern Art, Tokyo and The Metropolitan Museum of Art, New York. There has been a resurgence of interest in his work with exhibitions in 2018, such as the Oxford Ceramics Gallery and Marsden Woo Gallery, both presenting solo exhibitions on Henderson’s work. 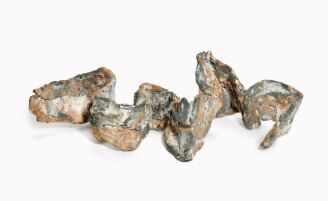