Purple is a colour that is undeniably important to the Ferrari mystique. The well-known article of trivia, that company namesake Enzo Ferrari preferred purple ink for his correspondence has been discussed everywhere from fountain pen forums to online museum exhibits. Renowned writing implement maker Montblanc has recently acknowledged this with the newest addition to their Great Characters collection, hopefully ordered with plenty of purple ink refills. Even the organization that manages the effects and estate of the late Ferrari founder, Museo Casa Enzo Ferrari, had to make a nod towards the shade, revealing that the source of the signature shade was from a small stationary store in downtown Maranello named Olivieri, which supplied the sports car empresario with a full litre of purple ink each year. 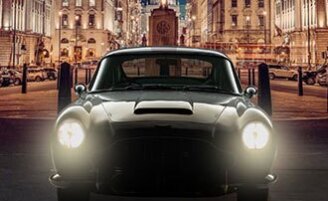 Ferraristi will no doubt know that the origin behind Enzo’s affection for the colour purple traced back to his father, Alfredo, who would write letters on a Royal typewriter and then pressed copies himself with a small pressure press. “The text and the signature of these wet duplicates came out an intense purple colour,” Enzo later recalled, “From that recollection came my loyalty to purple…”

Years after Enzo departed the company he inspired, many of his legacies live on. The outspoken Italian industrialist left a culture of achievement, devotion, and teamwork at his eponymous company, and today the talented engineers at Ferrari are still delivering sports-, super-, and hypercars that can still credibly compete with the world’s best. An undisputed highlight of next month’s RM Sotheby’s London Fall auction, set to unfold on 6 November 2021, this example invokes both Enzo and the soul of Ferrari itself. The 2016 Ferrari LaFerrari:

If the Ferrari F50 provided a capstone experience to sum up 20th century motoring, the project internally known as the F150 would aim to take the brand into the next century and beyond. Befitting its status atop the stable of prancing horses, the Maranello firm decided to name its newest halo car after itself: LaFerrari. As with the greatest road-going examples in the Ferrari catalogue, the brand-new hypercar would come standard with advanced knowledge gleaned from the firm’s vaunted motorsport program.

In the case of the LaFerrari, the competition-grade technology in question was a hybrid KERS system, derived from the unit used by the Ferrari F1 team. The system was composed of two electric motors (developed in conjunction with longtime Ferrari suppliers Magneti Marelli) which accepted energy regenerated from braking, the other of which generated energy to maintain charge and power ancillary electrical systems.

The second of these two electric motors derived power from perhaps the most impressive generator of all—the 6.3-litre V-12 engine, mounted immediately behind the driver and passenger, and developing a staggering 789 horsepower by itself. With the additional energy from the HY-KERS system delivering another 161 horsepower on top of that, the LaFerrari comfortably boasts the most grunt of any roadgoing Ferrari to date, with a total of 949 hp and 663 ft lb of torque on tap. Period motoring journalists compared the experience of driving the LaFerrari around its home circuit of Fiorano as, “closer to driving an LMP car than, say, a 458 Speciale.”

With production of the LaFerrari limited to 499 units in total, and the initial run achieving sold-out status shortly after it was announced, the collector market quickly began to pay attention to the newest Ferrari hypercar. Having such a relatively scant build quantity for a halo Ferrari (the legendary F40, we must recall, had production figures regularly quoted at topping 1,315 in total), the principal task for marque collectors was finding a LaFerrari for sale in the first place. Finding one that could be described as unique is even more difficult.
This example, resplendent in its Vinaccia paint over Pelle Chiodi Di Garofano interior, is verifiably one-of-one. Created for one of Ferrari’s special clients in Switzerland, the supremely tasteful colour combination was made to match two of the collector’s classic prancing horse examples. Stunning in its overall subtlety, this modern LaFerrari hypercar was delivered through notable Basel-based dealer Niki Hasler, and to date has only collected a total of two careful owners.

Perhaps in a nod to one wing of the LaFerrari’s main competition, this example has amassed only 918 miles on its odometer at the time of cataloging. One of this example’s most significant outings was participating at the Supercar Sunday event at Stonor Park in Oxfordshire, England, where its unique purple-hued paint scheme drew an audience, even among a strong showing of Ferrari, Lamborghini, and Ford supercars.

Well-equipped with five-spoke forged alloy wheels painted in grigio, an automatic suspension lifter, nero-finished brake calipers, Ferrari track telemetry, track inner cams kit, embossed Prancing Horse logos on the headrests, an integrated audio system, and perhaps the final piece of the puzzle: the factory addition of a F150 plaque on the steering wheel which brings this bespoke hypercar in formation with the legendary lineage of great Ferrari-branded machines.

Accompanied by colour-matched Pelle Chiodi Di Garofano luggage as well as a toolkit, original owner’s manual, as well as full documentation of its service history at authorized dealers Niki Hasler in Switzerland, and Maranello Concessionaires in the U.K., this LaFerrari is absolutely worthy of its prestigious nameplate, and is certain to draw an audience of young and old Ferrari fans alike when it crosses the block next month at RM Sotheby’s London Fall auction, set to unfold on 6 November, 2021. For an extensive photoset and to register and view the associated history file for this one-of-a-kind Ferrari hypercar, be sure to click this link.