Explore with Swanson: A Closer Look at Reptiles & Crustaceans of the Americas

By Halina Loft
Sotheby’s is pleased to present The Art of Expedition: The Works of George Swanson . This remarkable collection features watercolors and other drawings created during expeditions to the jungles and beaches of South America, as well as the Pacific Ocean and the Caribbean Sea. Online bidding closes 24 June at 10:00 AM EDT.

A rtist George Swanson (1908 – 1968) had an insatiable curiosity for the natural world, and devoted his life to exploring it. In the 1930s – 40s, Swanson joined famed marine biologist and ornithologist Charles William Beebe (1877-1962) on his expeditions through South America, the Caribbean and the South Pacific. The illustrations he made of snakes, crabs and other creatures are brilliantly colored and meticulously detailed. See what Swanson saw along the way and learn more about what drew that artist to these wonderful corners of the world.

Also called rock lobsters, the spiny lobster looks very similar to the Nephropidae, or clawed lobster – but spiny lobsters are not one and the same. These curious creatures have large, spiny antennae and lack the pincer power that help clawed lobsters defend themselves. Instead, they use their antennae as a weapon to fight off danger.

The blue-tailed lizard (also called the blue-tailed skink) is a remarkable little reptile. Found in North America and Australia, these skinks have a special trick: when a predator attacks, the bright-blue tail pops off and shakes vigorously, distracting the attacker long enough for the skink to escape. 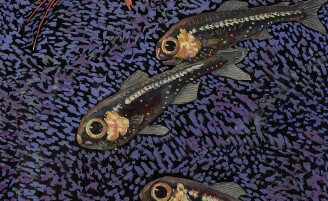 The coralsnake (also spelled 'coral snake') is a poisonous snake found in the Americas and South East Asia. Though this snake is often associated with a fun rhyme – red touch black, venom lack, red touch yellow, kill a fellow – the coralsnake's coloring is not always this reliable. Explorers, beware.

Found throughout Central and South America, the Chironius carinatus or machete savane snake has a slim body, but large head and eyes. While the machete savane can deliver an uncomfortable bite, its venom is not harmful to humans.

The milksnake may look intimidating, but don't be too quick to judge a book by its cover. Found throughout North America, this nonvenomous snake is harmless to humans – however, the species's resemblance to the highly-venomous coral snake is worth considering before you get too close. 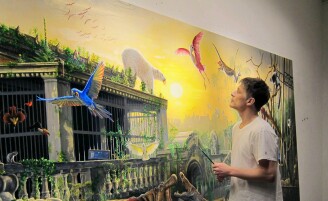