Everything Stops for Tea!

F or the great majority of us our daily routines have recently been completely transformed. Life is busier for some and has slowed down significantly for others, but it seems that the need for a moment of calm has never been greater. Whether the days are passing slowly or flying by as we race to keep up with the many changes, few things can offer a more welcome break than a cup of tea in the afternoon. The Brits have a long tradition of turning to tea for comfort, but where did this national obsession for tea and particularly tea in the late afternoon begin?

The drinking of exotic imported goods such as tea, coffee and chocolate became increasingly popular with Europe’s elite in the 17th century. European royalty and nobility were fascinated with the elegance, refinement and ceremony of tea consumption but until the early 18th century only Chinese and Japanese exported porcelain could service this fashion. A European 18th century printed panel from a set of three which depicts a Chinese tea ceremony (lot 54) demonstrates the cult of tea and the exotic at that time. With the development of porcelain at Meissen as well as factories in Vienna, Venice and several in France, new and exciting products became available. Early wares tended to imitate Yixing stoneware, Kakiemon, Imari and blue and white porcelains but as the century developed, the taking of tea developed to a more Western taste.

Most authorities insist that it was the 7th Duchess of Bedford who introduced afternoon tea into polite society at Belvoir Castle before March 1842. It is thought that the Duchess began taking tea, accompanied by cake or sandwiches in the afternoon to fill the long gap between breakfast and dinner, which took place around 8pm. The ritual was seemingly so enjoyable to her that she began to invite friends to join, and afternoon tea quickly became an established custom in upper class households. This new custom would have taken place in intimate settings such as the bedroom or boudoir, or the salon on grander social occasions, and was served on low tables hence the expression ‘low tea’. The term ‘high tea’ used today to describe afternoon tea accompanied by cakes and sandwiches, originally applied to a larger meal served on a higher dining table which would have constituted a heartier dinner for the working classes.

The tradition of afternoon tea was however already much alive in the 18th and early 19th centuries, as was documented in connection with the general festivities held all over the country to mark the Coronation of George IV on 19 July 1821. In Sidmouth, Devon, bands played, buildings decorated with royal emblems, &c. 'In the afternoon tea was provided, and the town band struck up a lively dance, when three sets of lads and lasses tripped it gaily on the light fantastic toe. Between 40 and 50 gentlemen sat down at six o'clock to a sumptuous dinner at the widow Street's Old London Inn. . . .' (Trewman's Exeter Flying Post, Exeter, Thursday, 26 July 1821). Even earlier than that, in J.N. Surgeon's Remarks on Mr Mason's Treatise upon Tea, published in London in 1745, we find the following (p. 12): '. . . he says, Tea-drinking in the afternoon may be good for such persons as each large meals, and drink much wine, ''in these circumstances, I say, Tea is requisite to cool, dilute, and forward digestion. . . .'

By the 1750s the French Royal factory of Sèvres had become the leading porcelain manufacturer of the day and the variety of different tea wares produced reflected rapidly changing fashions and the demands of their wealthy but fickle clientele. The factory employed a workshop of talented artists capable of producing miniature figurative, landscape and floral masterpieces framed in superb gilded cartouches reserved on bold and brightly-coloured backgrounds ornamented with naturalistic rococo details (see Sèvres lots 94, 96, 97, 99 and 100).

By the late 19th century afternoon tea was so prolific that the term '5 o'clock teapot' or '5 o'clock tea service' was used by the trade to specifically describe smaller tea pots such as lot 145, which was made in Birmingham in 1905 and is inset with a Wedgwood-type roundel. In James Tissot’s painting The Holyday from c.1876 we see a similarly sized blue and white teapot at the centre of the picture which is of a pattern made by Worcester in different colours and registered as a patent design in 1872.

A contemporaneous monthly gossip magazine commented on the popular custom, 'During the London season ladies returning from their drive in the Park enjoy their tea with a friend or two loitering in the drawing-room before separating to dress. It breaks the stiffness of the round of afternoon visits to offer it to the callers who happen to drop in. In country-houses the five-o'clock tea just suits the hours of the returning sportsmen, and furnishes a cheerful rendezvous for the scattered groups of guests. Indeed, for fashionables there is a regular ''tea-dress'' prescribed for country-houses – a sort of compromise between a wrapper and a morning-costume – of some delicate and becoming hue and lavishly trimmed with inexpensive lace. The princess of Wales [Alexandra, wife of the future Edward VII], I believe, is the originator of this caprice de toilette, and always wears one while ''making tea'' in the charming ''tea-room'' at Sandringham.' ('Our Monthly Gossip,' Lippincott's Monthly Magazine of Popular Literature and Science, Philadelphia, March 1879, p. 382).

In September 1936 The Bystander featured a photo of the society photographer Cecil Beaton hosting a tea party in a tram which stood in the garden of his home Ashcombe House in Wiltshire. The table is set with a teaset, cups and saucers and he is accompanied by his fashionable friends Princess Jean de Faucigny-Lucinge, (Mr. Cecil Beaton), Mr. Charles James, Mr. Oliver Messel, Mr. Wright Luddington, Miss Olga Lynn, Sir Michael Duff-Assheton-Smith and the Hon. Tom Mitford. This novel idea of hosting tea parties in whimsical locations is still very much in vogue today.

It is fascinating to contemplate that although the consumption of tea may have changed, the desirability and ownership of the accoutrements associated with it have not. In the 18th century travelers in France were noting that these items were for display as much as use, indeed it is recorded that Louis XVI’s aunt displayed eighteen cups and saucers with differing decoration on two tables between the windows of the salon d’hiver at Bellvue. 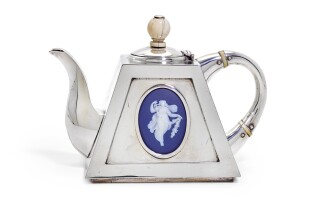