Erasing the Past in the Post-Truth Age, Gerhard Richter's 'Abstraktes Bild'

By Sotheby's
Sotheby's Contemporary Art Evening Auction on 5 March features Richter's magnificent 2009 work, Abstraktes Bild (910-2). Read on to discover more about the artist and his innovative approach to making art.

B orn in Dresden in 1932, Gerhard Richter began his career painting murals on schools, museums and other public buildings in the 1950s. By then, Dresden was part of a new country – the German Democratic Republic, otherwise known as East Germany – a satellite state of the Soviet Union.

Finding the artistic possibilities limited, in 1961 Richter and his wife left for the West German city of Dusseldorf (two months before the Berlin Wall went up). He would never see either of his parents again. In the many decades since, Richter has forged a highly successful career. In 2012, his canvas, Abstraktes Bild (809-4), fetched £21.3 million at Sotheby’s in London, setting a world record at the time for the price paid at auction for a work by a living artist.

Richter’s painting is often broken down into two categories, abstract and figurative – Abstraktes Bild (809-4) being an example of the former. Likewise Abstraktes Bild (910-2) which is being offered at the Contemporary Art Evening Auction in London on March 5.

In his figurative works, Richter has frequently tackled the complex, recent history of his homeland. Aunt Marianne, for example, depicts the artist as a baby in the arms of his eponymous aunt – who suffered mental illness and, in 1945, was put to death as part of the Nazis’ eugenics programme.

He would also paint an acclaimed series about the demise of the Baader-Meinhof extremist group of the late 1970s; as well as a set of works in 2014 inspired by four photographs taken by a prisoner at the Birkenau concentration camp in the Second World War.

The abstract paintings, by contrast, have more to do with art history than the purely historical. Which is to say, Abstraktes Bild (910-2) might be compared to the vast, meditative canvases of Mark Rothko; to the electric glow of Dan Flavin’s fluorescent light sculptures; to the Abstract Expressionism of Willem de Kooning; even to one of Monet’s sunset visions.

Painted in 2009, Abstraktes Bild (910-2) is dominated by a dazzling yellow, complete with fields of radiant orange and deep aubergine. Horizontal veils of impasto in the top two thirds of the composition stand out from the vertical drag of strokes in the bottom third.

To paint Abstraktes Bild (910-2), Richter used what has become a trademark tool for his abstracts: the squeegee. This is a rectangular sheet of Perspex fixed to a wooden handle, which the artist scrapes across the canvas surface soon after having applied his paint with a brush.

One can witness Richter and his squeegee in action in a 2011 documentary by Corinna Belz called Gerhard Richter: Painting. In it, he’s at work on Abstraktes Bild (910-1), a sister canvas to the one coming to auction. (Both measure 180 cm by 180 cm and are among the set of abstract paintings designated “910” in the artist's catalogue raisonné, made between April and September 2009). Richter’s squeegee here is roughly the size of a car bumper.

He has been making abstract works in such a fashion since the mid-1980s, happy to obliterate his personalised brushstrokes in the quest for a sumptuously unconventional surface. 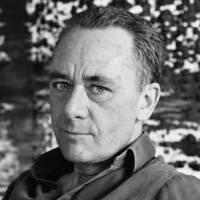 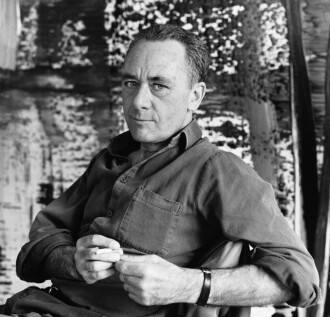 What does it mean, though, to make a painting so defined by the act of erasure rather than the creative build-up of elements and layers? Richter himself has never fully addressed this. (In Belz’s film, he says that “to talk about painting is… perhaps pointless. You can only express in words what words are capable of expressing... and painting has nothing to do with that”).

He was slightly more forthcoming in 2002, when he explained the contrast he saw between his squeegee works and the abstract expressionist pictures made in New York in the 1950s. “Jackson Pollock, Barnett Newman and Franz Kline [showed] heroism derived from the climate of their time”, he said, “but we do not have this climate now".

Richter sees his own times as anything but heroic. Some have duly interpreted the blurring achieved by his squeegees as a metaphor for Germany’s shame at its Nazi past – and attempts to wipe that period of its past away.

A work such as Abstraktes Bild (910-2) is a fine abstract painting in its own right, of course, and it might seem unwise to read things into it that the artist himself never explicitly intended. However, to do so is also to compliment him on a creation so bountiful it invites all manner of associations and connotations.

In 2019, for example, a most tempting way to interpret Richter’s abstractions is to see the veiling effect of his squeegee as the perfect painterly expression of this post-truth age, where the political culture is defined by obfuscation and cover-up.

Abstraktes Bild (910-2) and its like are timeless images which, in decades to come, one suspects will be still be yielding new readings.