Elegant Jewels from the Collection of a Renowned British Actress

By Sarah Jordan
Many inspiring individuals curate fine jewelry collections with beautiful signed pieces, unusual objets d'art and covetable diamonds and gemstones. In the case of the late actress and voluntary worker, Elizabeth Irving OBE (1904-2003), her pieces reflect a refined elegance and classic sensibility, paired with hints of creativity one would expect from a performer.

I rving descended from a line of formidable British actors, including her father, mother and grandfather, Sir Henry Irving, who is believed to have inspired the character of Count Dracula in Bram Stoker’s 1897 novel, Dracula. Having made her stage debut aged just 12, Irving went on to study acting in London and Oxford at 16 and followed this with professional appearances in Shakespeare’s A Midsummer Night’s Dream, among other significant roles.

Irving married in 1926 and left the world of acting behind, although it didn’t quell her passion for leadership and performance. She served as chairman of the National Federation of Women’s Institutes from 1951 to 1956 and was appointed an Officer of the Order of the British Empire (OBE) in 1964 for her philanthropic efforts, including the ‘Keep Britain Tidy’ charity she founded in 1955.

Just like Irving herself, her fine jewellery pieces are neither wallflowers nor ostentatious. A Cartier diamond double-clip brooch (estimate £15,000-20,000), dating from the 1930s, combines two geometric buckle designs, set with a striking array of circular-, baguette-cut and shield-shaped diamonds. Irving clearly had a love of Cartier, with her collection including a diamond brooch (estimate £3,000-5,000), dated from the 1960s and signed Cartier, with textured gold petals and brilliant-cut diamonds. These will be auctioned alongside a pair of geometric diamond ear clips (1930s composite, estimate £5,000-7,000), which, although unsigned, are believed to be the result of reworking a Cartier double clip brooch.

A fourth Cartier creation, this time a diamond vanity case (estimate £4,000-6,000), dates from 1937 and features a reeded design set with brilliant-, circular- and baguette-cut diamonds. When opened, the case reveals a mirror with compartments for powder, lipstick and a comb.

These pieces from the collection of Elizabeth Irving, plus many other fine jewellery creations, feature in the Fine Jewels Online auction from 21-28 March 2019. 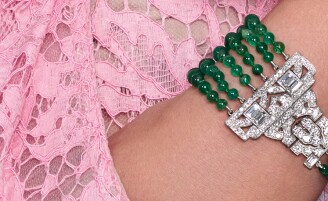