Celebrating a Century of Sensational Wine

W ith the start of a new decade, we can wonder where it will lead us politically and environmentally. However, a committed wine person will also ponder the quality of vintages to come over the next ten years. This is, of course, as unknown as our future on this planet, but it is also linked to the environment in which we live and how we manage climate change. All will, eventually, be decided in the glass, the ultimate judge.

London’s next wine auction on 18 March demonstrates the decades in glorious fashion, starting with the 1920s and the incomparable Yquem 1921, one of the wines of my life and blessed with the gift of eternity. One of my regrets, along with failing to play the piano like András Schiff, is one of bad timing – I was not around to taste the wines of the 1920s when they were young! The same applies to wines of the 1940s – Cheval Blanc 1947 was apparently delicious in youth. It is still show-stopping now, with its huge richness and impact. There are other First Growth 1947s in this sale, with the gold-standard provenance that is so vital with legendary bottles at this level.

Then we come to the 1950s and 60s, where I did ‘cut my teeth’ and decided, pretty promptly, that the wine trade/profession (we can never decide which it is) was for me. The flag-waving wines of these two decades are all over this sale, some in double magnums, viz Latour 1955, Lafite 1959 and Petrus 1964. The Seventies and Eighties are certainly not put in the shade, with Petrus 1975, Haut Brion, La Mission and Margaux 1982, Petrus and Lafleur 1982, Margaux and Palmer 1983 and those two giants, Haut Brion and La Mission 1989, while the Nineties are waiting in the wings.

Leaving Bordeaux, with a certain reluctance in this instance, one falls into Burgundy’s hedonistic embrace, seduced above all by a DRC 12-bottle assortment in the wondrous 1985 vintage. Drinking the decades certainly has its charms... 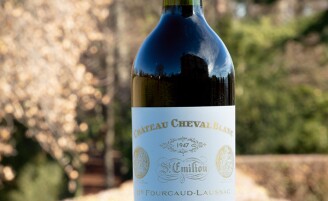