Dr Erika Pohl-Ströher: The Life of an Astonishing Collector

S cientist, geologist, collector, museum patron, and businesswoman, Dr Erika Pohl-Ströher (1919-2016), was the granddaughter of Franz and Marie Ströher, who founded German hair care and cosmetics giant Wella AG, bought in 2003 by Procter & Gamble. Erika was born in Wurzen near Leipzig and grew up in Rothenkirchen in Vogtland, in the foothills of the Saxon Erzgebirge (Ore Mountains) - later part of East Germany.

Her interest in science became evident from early childhood, when she developed her lifelong fascination for rock minerals and crystals. Whilst visiting the spa in Bad Gastein in Austria, she was taken with the beautiful quartz souvenirs available there, which she supplemented with specimens from the Ore Mountains closer to home. She later went on to study chemistry and biology at the University of Jena, gaining her doctorate in biology.

After the Second World War, the Ströhers fled Russian-occupied Saxony, settling in the West in Hünfeld in Hessen, where Erika’s father reestablished the Wella factory. However, Erika never lost touch with her beloved native Saxony. In 2004 she presented her minerals collection (by now comprising more than 90,000 specimens from around the world) as a permanent loan to the Technische Universität Bergakademie, Freiberg and founded both the interactive museum Manufaktur der Träume (Factory of Dreams) in Annaberg-Buchholz from her collection of Ore Mountain folk art and crafts, and the Pohl-Ströher Repository in Gelenau, where folk art, historical toys and Christmas and Easter items are displayed twice a year.

Whilst minerals and folk art took up much of her time in later life, Erika was also a lover of paintings and books. As well as inheriting pictures and objects from her father Karl, she and her husband Gerhard Pohl were avid collectors in their own right with wide-ranging interests. Their collection is as eclectic as it is discerning, encompassing one of the foremost collections of miniatures in the world, Caspar David Friedrich’s Morning Landscape with Mountain Lake which was purchased at auction in 1978 (the subject of which is very much an ode to her life-long love of the mountains and the mineral treasure they harbour), and important German Expressionist art including works by Oscar Schlemmer, and Karl Schmidt-Rottluff.

Dr Erika Pohl- Ströher’s interest in miniatures began with the serendipitous sighting at an art fair of a portrait miniature of a young girl holding a doll, which attracted her attention initially since dolls were another collecting enthusiasm. Its purchase marked the beginning of what was to become one of the most important private collections of portrait miniatures ever assembled. The period of nearly forty years during which her collection was formed was a golden age for acquiring miniatures, when major collections made by earlier generations - among them those of David-Weill, Clore and Holscheiter - as well as smaller groups sold from family inheritances appeared on the market. Dr Erika Pohl- Ströher was in a privileged position to be able to take full advantage of the opportunities presented.

The resultant collection is remarkable in its scope, spanning all the major national schools, with the work of the leading exponents represented by numerous examples. The portraits range from formal images of state to depictions of disarming intimacy – the latter conforming more to Dr Pohl-Ströher’s sensibility – with masterly examples of all the techniques and mediums employed by the artists: works variously in watercolour, bodycolour and oil on vellum, paper and ivory, as well as reverse-painted glass and enamel on gold or copper. 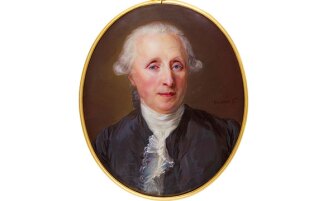