Discover One of the Finest Collections of Tiffany Glass Work

New York
On 12 December at 5:00 PM EDT, Sotheby's will hold Dreaming in Glass: Masterworks by Tiffany Studios auction in New York. Starring in the event is The Collection of Jeep and Carla Harned, Durango, Colorado. The Harneds avidly collected remarkable art glass, especially works from the renowned Tiffany Studio. Now, their exquisite collection will come to auction, creating a rare opportunity for Tiffany devotees to bid on some of the finest glass works ever produced.

An Introduction from Carla Harned

Grover Cleveland “Jeep” Harned founded Music Centers Incorporated in Fort Lauderdale following his discharge from the U.S. military in 1960. His knowledge of radar equipment learned while serving as an army lieutenant laid the groundwork for a successful career designing, manufacturing and selling the highest quality audio equipment on the market. Jeep spent over 25 years growing his company from a one man operation to over 525 employees, eventually selling MCI to Sony in 1982. His passion for innovation and ingenuity in his professional sphere suffused into Jeep’s personal, decades-long art collecting endeavor.

After retiring and moving up to Asheville, North Carolina, Jeep would often attend local estate sales to while away his time. Art glass grabbed his attention, and so he began collecting, working his way up in caliber until the work of Tiffany Studios and Thomas Webb became his main focus. He owned his own plane, so if he heard of a prominent collection going up for sale or even one piece that he was interested in, Jeep would hop on the plane and see if he could acquire whatever it was that struck his fancy.

We later settled in Durango, Colorado, where the stunning landscape and proximity to nature brought us much joy. Tiffany’s many representations of nature brought the outdoors into our home. At night, our house glowed with Tiffany lamps. Jeep’s admiration of the beauty and craftsmanship in both Tiffany’s leaded glass and blown glass pieces motivated him to build a collection that he was truly proud of and which fulfilled him greatly.

Magnificent Tiffany Works from The Collection of Jepp and Carla Harned, Durango, Colorado


This exceeding rare "Fruit" lamp is the fourth example ever made, and was one of the earliest models created by the Tiffany Studios, as signified by the inclusion of a dash number. The shade, which presents Baldwin apples, green foliage and clusters of grapes, was discontinued in 1906. The magnificent bronze "Turtle-Back" base is the ideal foil to the shade – the rich brown and green patina of the base complements the forest green leafage of the shade nicely. Considered as a single entity, this lamp is a superlative object that brilliantly displays the artistic culmination of Louis Tiffany’s exploration of the motif.


The peony blossom, with its extraordinary lushness and variation in color palette, was the ideal subject for Tiffany’s leaded glass shades and was represented in a few variations by the firm. This particular lamp also uses a rare reticulated "Arch and Leaf" base, which grants the lamp an impressive sculptural presence.


Tiffany Studios' craftsmen mastered the difficult task of capturing the beauty and complexity of the natural world in a variety of mediums. The firm's landscape windows, particularly their popular "River of Life", was one of their most successful endeavors in this regard. In addition to its richly layered composition, the many techniques employed in the assembly of the present window contribute to its incredible pictorial depth. The peaceful and sublime landscape achieved through Tiffany's impeccable artistry invites the viewer to pause and contemplate the grandeur of the natural world.


The “Wisteria” lamp was one of the most ambitious and successful models produced by Tiffany Studios. Today, historians recognize the lamp as an icon of American design and one of the studio's greatest accomplishments in leaded glass. The present lamp is fascinating both due to its beauty and the presence of an accession number on the base, which suggests the pieces was at one time in the collection of or exhibited at the Chrysler Museum in Provincetown, Massachusetts. Though no records exist from this period, it would not be surprising for such a high-caliber lamp to have been exhibited at such a prestigious institution.

More From the Collection 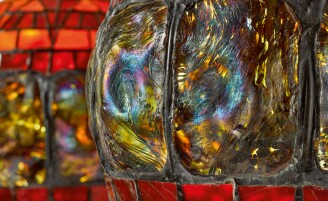