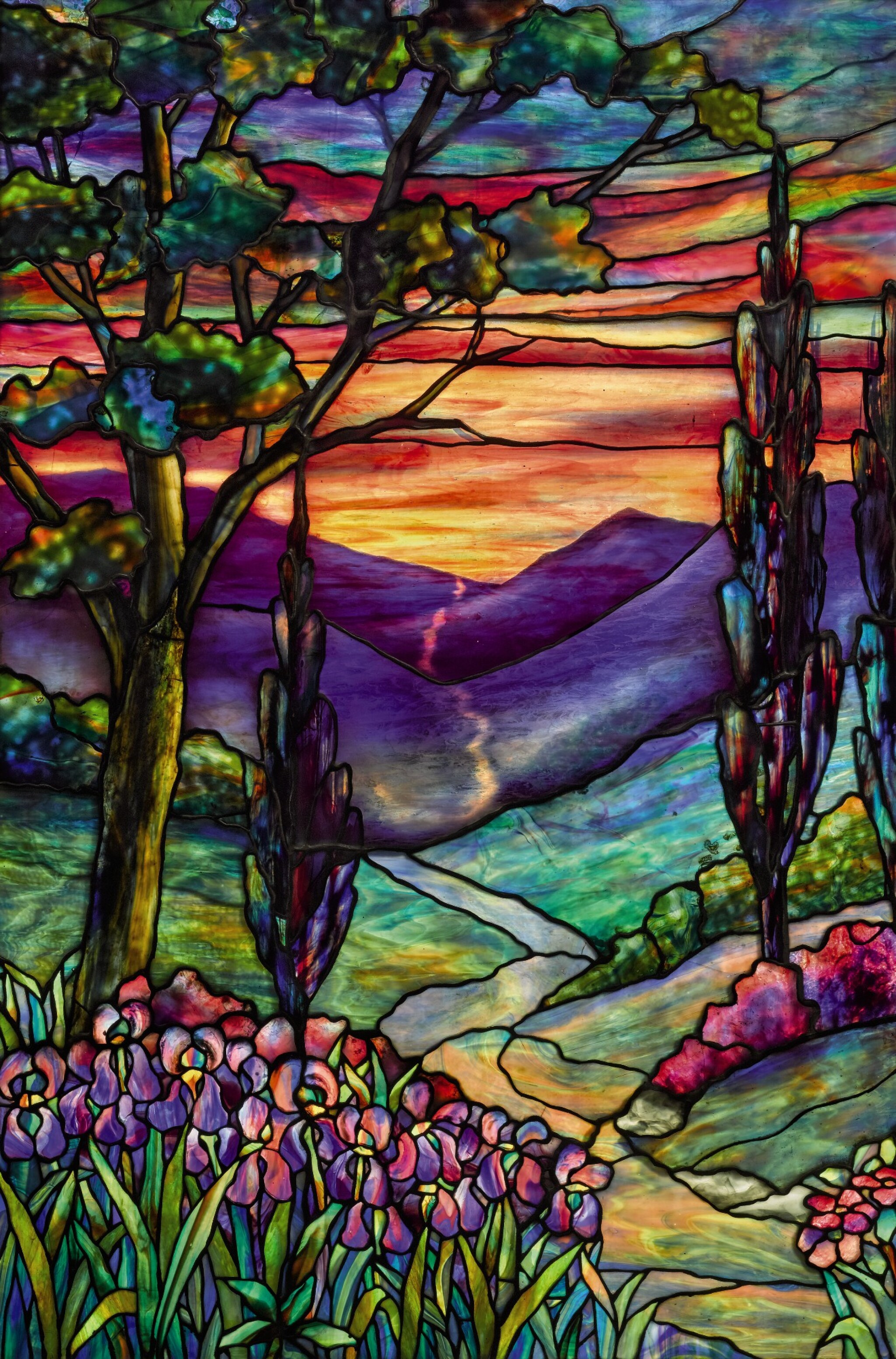 Overall in very good condition. This window depicts a poetic landscape scene with an incredibly rich and vibrant color palette. The window with approximately 16 hairline cracks dispersed throughout, including some hairlines to the plates which are visible on the exterior; all hairlines appear stable. The window with some light surface soiling consistent with age. The window is plated up to three layers, which heightens the visual depth of the landscape composition. The window with some trapped surface soiling between the plates, not visually distracting and consistent with age. The outer geometric glass border (not illustrated in the catalogue illustration) appears to be a later addition, likely added when the window was removed from its original installation. The latter is commonly seen in windows of this type that have been relocated at some point in their history. The window is currently installed in a contemporary wood frame which is in very good condition. A truly breathtaking window displaying a gorgeous composition and a rich, vibrant glass selection.

Nature and Ingenuity: The Collection of Jeep Harned

Grover Cleveland “Jeep” Harned founded Music Centers Incorporated in Fort Lauderdale following his discharge from the U.S. military in 1960. His knowledge of radar equipment learned while serving as an army lieutenant laid the groundwork for a successful career designing, manufacturing and selling the highest quality audio equipment on the market. Jeep spent over 25 years growing his company from a one man operation to over 525 employees, eventually selling MCI to Sony in 1982. His passion for innovation and ingenuity in his professional sphere suffused into Jeep’s personal, decades-long art collecting endeavor.

After retiring and moving up to Asheville, North Carolina, Jeep would often attend local estate sales to while away his time. Art glass grabbed his attention, and so he began collecting, working his way up in caliber until the work of Tiffany Studios and Thomas Webb became his main focus. He owned his own plane, so if he heard of a prominent collection going up for sale or even one piece that he was interested in, Jeep would hop on the plane and see if he could acquire whatever it was that struck his fancy.

We later settled in Durango, Colorado, where the stunning landscape and proximity to nature brought us much joy. Tiffany’s many representations of nature brought the outdoors into our home. At night, our house glowed with Tiffany lamps. Jeep’s admiration of the beauty and craftsmanship in both Tiffany’s leaded glass and blown glass pieces motivated him to build a collection that he was truly proud of and which fulfilled him greatly.

Tiffany Studios' craftsmen mastered the difficult task of capturing the beauty and complexity of the natural world in a variety of mediums. The firm's landscape windows, particularly their popular "River of Life" theme, seen in the present lot, was one of their most successful endeavors in this regard.

An intricate program of thoughtful glass selection, painting, acid-etching and plating (layering of glass) culminates in an elaborate landscape scene that is imbued with symbolism. With remitted light, the window radiates warmth, evoking either a sunrise or sunset at the peak of summer—a beginning or an end. Cypress trees, which are commonly associated with mourning, dot the lush mountain valley beyond a bed of irises, which symbolize faith and hope. A winding river flows toward distant mountains—a motif often used in Tiffany's mausoleum windows as metaphor for passage into the afterlife. In addition to its richly layered composition, the many techniques employed in the assembly of the present window contribute to its incredible pictorial depth. The peaceful and sublime landscape achieved through Tiffany's impeccable artistry invites the viewer to pause and contemplate the grandeur of the natural world.