One of Britain’s favourite homeware designers Emma Bridgewater holds a special place in her heart for the work of Mary Fedden and Julian Trevelyan.

Having met Fedden in the late 1990s through her husband, the illustrator and architectural historian Matthew Rice, and his mother, the brilliant textile designer, and contemporary of Fedden, Pat Albeck, together Emma and Matthew approached Fedden to design a pattern, known as Hellebore, specifically for her burgeoning ceramics business, situated in the heart of the potteries in Stoke-on-Trent.

It is perhaps for this very reason that Emma picked out Julian’s late 1930s and Mass-Observation paintings of the potteries as amongst her highlights of the sale, including Lots 505, Clay Pits, Stoke-on-Trent and 508, Potteries.

“I suppose these landscapes have special meaning for me,” Emma told us, “being the location of the Emma Bridgewater factory today, and if I could go back in time to any period I would be hard-pressed to choose between Shakespeare’s London and the Stoke-on-Trent potteries of the turn of the twentieth century; both worlds which, today, are utterly lost.”

Bridgewater picks out Julian’s later, 1987 Stoke-on-Trent painting (Lot 547), recalling how when she first visited the potteries she saw the tall smoking chimneys and constantly churning coal mines, and how whilst English Heritage have gone to great lengths to preserve so much of this, it is a time that one can never fully go back to – a time when the potteries employed literally thousands of people – the people who would have lived in the neat rows of terraced houses Trevelyan depicts in the top left corner of the painting.

Whilst much enamoured with his work, sadly Bridgewater never met Julian, but recalls Mary with a great sense of warmth, respect and admiration. “She worked with a single-minded dedication… there was no stopping her” – a passion and drive that she sees in her mother-in-law. Emma picks out Lot 569, Cat with Flowers, and recalls how at an opening party for one of her first pottery cafes on the Fulham Road Mary presented her two young children with lovingly made stuffed cat toys - which looked slightly more like lions!

Two such ‘lion-cats’ still live as guardians of the sofa at Durham Wharf to this day. These proved the inspiration for another, albeit short-lived design for Bridgewater, in which Emma and her team stayed as loyal as possible to Mary’s original colours and designs.

Mary was to produce a third design for Bridgewater, the Egg & Feather pattern, which Emma recalls with great affection whilst looking at Basket of Grapes (Lot 543).

Admiring this beautifully balanced domestic scene, with fruit and pottery artfully strewn across the table top, Bridgewater comments on the ‘great sense of how these things gathered on kitchens tables and worktops’ providing inspiration for Mary’s paintings, with pieces filling the cupboards even to this day at Durham Wharf, with Bridgewater’s ‘little mugs’ (as Mary described them), sitting snugly on the window ledge overlooking the courtyard and the Thames beyond.

The art that Mary and Julian created at Durham Wharf, much like Bridgewater’s ceramics and homeware designs, are pieces to be admired and adored; pieces that live and continue to live in the homes of collectors all across the world, but which remain, at their heart, so wonderfully a part of British history.

The A Painter’s Paradise: Julian Trevelyan & Mary Fedden at Durham Wharf sale is in London on 23 November.

Join us at New Bond Street on Sunday 20 November for a series of talks ahead of the sale including a gallery talk and book signing at 1pm with Philip Trevelyan, author of Julian Trevelyan: Picture Language, and a book reading of Motley The Cat at 3pm by Sheila Hancock. To reserve your place email rachel.davis@sothebys.com 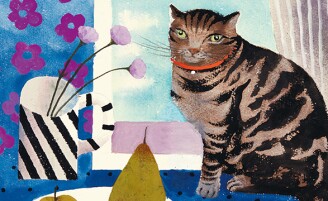