W ith his poetic spirit and rich, ethereal works, one cannot deny; there’s something about George Frederic Watts. The son of a pianoforte maker and tuner, Watts was born into a house of music, in February of 1817. Growing up in Victorian London, amongst the dusky alleyways and twisting streets of west Marylebone, Watts was neither affluent, nor strong. Instead, his wealth and strength lay in his extraordinary gift, the gift of art. Through ill-health, the young Watts discovered and honed his talent, often sketching late into the early hours, whilst cooped up in his little room. His pencil never tired. At the age of ten, Watts entered the studio of William Behnes, the eminent English sculptor, famed for his carved, marble busts, where he studied informally before enlisting at the Royal Academy in the spring of 1835. Precisely two hundred years after his birth, his visionary works continue to bewitch and enchant us: a testimony to the enduring quality of his work.

As the world reacts to the bicentury of Watts’s birth, one thing is startlingly clear: Watts lives on. As England’s very own ‘Michelangelo’ turns 200, Watts gallery, home to some of the artist’s finest works, is alive with celebration. At the heart of this commemoration lies the Watts 200 programme, a series of compelling exhibitions, showcasing Watts at his very best. No matter the medium, be it classical frescoes or striking Symbolist works, upon the walls of the Watts gallery, hangs something for everyone. Whilst A Life in Art centres around Watts’s sketches and drawings, England’s Michelangelo presents a series of visionary paintings, including Love and Life, The Hope and The Sower of the Systems which returns home after more than a century away. A third exhibition, entitled Monumental Murals completes this trinity of three remarkable shows, reflecting the scope and breathless variety of Watts’s exquisite oeuvre.

Yet, what’s most impressive here is Watts’s capacity to endure. The poetic beauty of his work defies time, transcends language and surpasses cultural and racial boundaries, inspiring some of history’s most pervasive, political voices. Indeed, it was in Watts’s Hope that Martin Luther King found the inspiration for one of his most poignant sermons, ‘Shattered Dreams’. The great, melancholy canvas, which depicts a blindfolded figure of Hope, plucking at the very last string on her broken lyre, gave faith to the faithless, and is thought to have hung on the walls of Nelson Mandela’s cell. Its message is one of strength, perseverance and courage, inspiring us to find music in the silence of pain. Less than forty years later, the piece would become Barack Obamas favourite painting, driving his spectacular ascent to the White House. Through Watts, Obama discovered the ‘Audacity of Hope’, the title of his rousing, political address at the Democratic National Convention in 2004, and through Watts, like Martin Luther King and Nelson Mandela, Obama moved a generation to change. Such is the power of his works.

On 13 July, Sotheby’s will offer a painting that rivals the power of Hope: Watts’s Orpheus and Eurydice. One of his greatest compositions, the work, vibrant and dynamic, is an exploration of raw emotion, depicting the poignant, final embrace of the mythological lovers Eurydice and Orpheus. The legend tells the story of the beautiful wood-nymph Eurydice, who is killed by a single snakebite. Parted by death, Orpheus journeys to the underworld where he seduces the gods of Hades with his beautiful lyre, in a bid to win her back. Charmed by his song, Pluto and Persephone present Orpheus with a challenge; he may lead Eurydice through the shadows of Hades, back to the surface of Earth, so long as he doesn’t look back. He looks back. It is this hopeless moment, this struggle between love and loss, life and death, that Watts’s Orpheus and Eurydice depicts. Intensely moving, the work not only commands attention, but provokes emotion, unsettling our senses by inviting us to feel. In its striking beauty, one can see just why there’s something about George Frederic Watts. 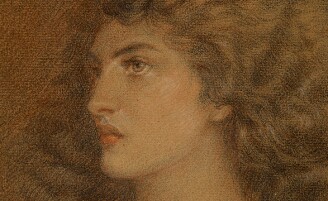