By Sarah Spencer
On 15 June the Mercer Art Gallery in Harrogate opened a major exhibition, William Powell Frith: The People’s Painter, to celebrate the bicentenary of the artist’s birth. Less than a month later, visitors to Sotheby’s Bond Street premises will be able to see three examples of his work from private collections alongside work by his contemporaries in the pre-sale exhibition for Victorian, Pre-Raphaelite & British Impressionist Art .

W illiam Powell Frith was born in Aldfield near Harrogate in 1819. He relocated to London in 1835 to begin his artistic training at Sass’s academy, followed by the Royal Academy Schools, and rapidly became phenomenally popular with the public and respected by critics. Frith was the most admired painter of his time, best known for his hugely complex panoramic pictures of modern life, a genre he created. The unprecedented popularity of his work necessitated increased security measures at the Royal Academy, with barriers installed to protect his paintings from enthusiastic crowds who wished to observe their intricate detail close-hand. The Royal Academy exhibited more than 140 of Frith’s works in total.

Many of these works feature in William Powell Frith: The People’s Painter which brings together 70 of his paintings and prints from major national collections, and includes some of his most celebrated masterpieces, such as Ramsgate Sands (Life at the Seaside) (1854, on loan from the Royal Collection), The Derby Day (1858, on loan from Tate Britain) and The Railway Station (1862, on loan from Royal Holloway College). Railways had made places like Ramsgate and the Epsom Downs accessible to all classes, and Frith captured the diversity of Victorian society in these three colossal works. Ramsgate was a highly popular resort during this period, owing to its proximity to London, and was frequented by Queen Victoria during her childhood. She stayed in Albion House, the highest building overlooking the beach in Ramsgate Sands, and she acquired the painting in 1854. The Derby was a national holiday and a wonder of the Victorian age, and Frith was commissioned by Jacob Bell to capture in crowds at the event in The Derby Day, a 5-6-foot canvas. He used sketches, models and photographs to create the impressive composition.

Frith also painted more traditional subjects, some of which feature in Sotheby’s forthcoming Victorian, Pre-Raphaelite and British Impressionist Art sale on 11 July 2019. These include portraits, such as The New Earrings and Shakespearean and literary subjects, such as Juliet. The first of Frith’s pictures to be exhibited at the Royal Academy was Malvolio and Olivia (1840), a scene from Twelfth Night.

His love of theatre was prompted by a performance of Shakespeare’s King John that he attended in London at the age of 16. The Lover’s Seat (Lot 48) depicts an intimate moment between two lovers, identified as poet Percy Bysshe Shelley, whom Frith greatly admired, and Mary Godwin (later Shelley, author of Frankenstein). The pair began a scandalous love affair in 1814 before their eventual marriage. Frith himself had a colourful personal life, fathering a total of 19 children between his wife and his mistress. He kept his mistress and second family just a few streets away from his marital home and married her after his wife’s death. 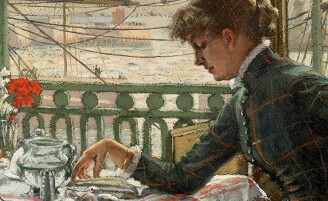