I n Cai Xiaosong’s own words, his art is ‘classically contemporary'. Like a peace-keeper armed with a brush, Cai approaches his paintings with a sense of purpose and seeks a harmonious solution to balance the opposition. Throughout his career, Cai has been drawn to analysing the conflict between classical and contemporary, past and present, tradition and innovation.

In the past two years Cai Xiaosong embarked on the Song – Perception series and created 20 new paintings exclusively for Sotheby’s exhibition, Perception: Cai Xiaosong. This new series manifests a mature painting style, not only demonstrating confidence in brushwork but also emphasizing movement and maintaining resonance in overall composition. Ahead of his solo exhibition at Sotheby’s Hong Kong, we spoke with Cai Xiaosong about his personal style and how the new series of works become his visual interpretation of the world on a metaphysical level.

Sothebys: How would you describe your personal style?

If I were put on the spot to find a term, then I’d describe it as classically contemporary. "Who can of Tao the nature tell? Our sight it flies, our touch as well. Eluding sight, eluding touch, the forms of things all in it crouch…" ( Tao Te Ching, Laozi ). Working between similarity and difference, I use classical methods to describe my perceptions of the origin of all things.

Cai Xiaosong: How do you see your paintings pushing the boundaries of the tradition? On the other hand, how is your work rooted in the classical?

The question of how to confront the traditional has not only plagued ink artists. Nearly all artists from countries with ancient civilizations face this issue, and it exists at all levels of society – business people also must pay attention to models of innovation. My personal view is not to replicate, nor to subvert, but to enrich. I think that my works are enriched by the traditional, and this traditional wind drifts across the surface of contemporary art.

S: How does your personal/cultural background reflect in your art?

CX: I was born in the 60s, so you could say that I experienced China’s major transformations. My father was a scholar of ethics, and my mother studied law. The thing I feared most as a child was when my father would talk philosophy at the dinner table – Pythagoras, Socrates, Kant, Hegel – so to this day I continue to eat my meals quickly, and leave the table after about five minutes. But later on, many people said that I looked at problems in terms of their essence, seeking out origins, transitions and logic at every turn. From the beginning, these things flowed deep in my blood. I graduated with a degree in Chinese ink painting, and when I was young we were influenced by the dissemination of Western philosophy and aesthetics. With faith in the concept that there’s no making without breaking, I experienced the anxiety of an era in which the standards for everything were completely toppled and reestablished anew. With this deepening of experience, the unique value of traditional Chinese art becomes deeper as well. I’ve found that you can stand back and take in the broader perspectives on Western and Eastern civilization, so my work tends to pursue a fusion of the classical and the contemporary.

S: Your art has garnered international attention with the debut of the Planet illuminated painting installation at the 54th Venice Biennale in 2011. Is there a discernible difference in the critical response and interest in your work from those regions?

CX: People perceive things differently, have different feelings, and their interpretations will naturally be different. I like to listen to how my collectors analyze my work, as this often gives me surprises. One time one of my collectors told me that she especially liked a certain piece because she felt that my work gave her the perspective of looking down at the world from millions of meters in the sky. There was also an American collector who said that when he saw my painting of a stone it was like it had grown on its own from the picture plane. This was also quite interesting. As long as they like my work I’m satisfied.

S: Can you tell me a little bit about your transition between mediums and painting styles?

CX: There was a transformation, one from physical forms to metaphysical forms. I’m embarrassed to talk philosophy again, so I’ll leave more space for the viewers to interpret the works for themselves.

S: What are your insights into the sometimes very separate and sometimes symbiotic art worlds?

S: Which aspect of your work excites you most?

CX: I love to worry about heavy matters. In today’s world of frequent conflict over religion, race, and territory, the contradictions have been intensified. These would seem to be issues for politicians, but if everyone were to look at these problems more artistically, maybe the world could change for the better? For everyone who appreciates my works, if they can perceive the artist’s intentions, it’s my greatest hope that the works will display an Eastern sense of values from an Eastern aesthetic sensibility, and allow people to feel the relationship between humans and all things.

S: Are there any rules you live by?

CX: I’m a perfectionist who pursues a consummate form. For me, it’s got to be the best or nothing. On the canvas, I use all of my primordial powers and as much ink as it takes.

S: Are there any western artists in particular that you identify with today?

CX: I appreciate Western artists like Dürer, Courbet, Renoir, Cezanne, Giacometti, Mondrian and Freud. They were masters of their generations, and in their works you can see the accumulation of various elements from their predecessors – how they enriched the work of their predecessors, but also inaugurated new eras. These are my idols. 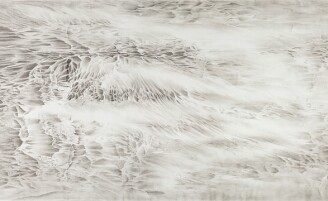