Barbara Hepworth and her ‘nest of gentle artists’: 1930s Modernism in London

Much as it is today London in the 1930s was a hotbed of creative ideas, not only for British-born artists and architects, but also for those escaping persecution and attack from their native lands. And at the artistic hub of 1930s London stood Hampstead – the once home of poet John Keats and since the early part of the twentieth century home to artists and patrons who today play a central role in the story of Modern British Art, and celebrated as part of our the  Modern & Post-War British Art sale on 12 and 13 June.

Hampstead offered an escape not just from the influx of European emigres such as Naum Gabo, Piet Mondrian, Walter Gropius and Marcel Breuer, but also for two of the most central figures to this ‘nest of gentle artists’ - to borrow a phrase coined by critic and historian Herbert Read - Ben Nicholson and Barbara Hepworth. Both coming out of unsuccessful marriages (Hepworth to the sculptor John Skeaping, and Nicholson from his first wife Winifred), the pair lived and worked together at 7 The Mall, Parkhill Road, with artists Henry Moore and Ivon Hitchens both living close by. These artists were not just neighbours but close friends and artistic allies for a new, bold approach to art that was taking root in the capital. They also holidayed together up at Happisburgh in Norfolk in 1930 and 1931, and exhibited together as part of the progressive Seven & Five Society.

Hepworth and Moore had known each other since their time at Leeds School of Art in 1921, after which both moved to London to pursue a career in the arts but it was at Happisburgh that Hepworth and Nicholson became close – with Nicholson writing to his wife Winifred, who was at home in Cumbria ‘I do like these sort of free creative people they are alive and vital’.

This creative atmosphere was further bolstered by the appearance of Naum Gabo, who first visited London in 1935. A Russian emigre who had sought asylum, refused on the continent, Gabo settled in Hampstead in 1936 and together with Nicholson and Hepworth became a key contributor to Circle – the International Survey of Constructive Art – a manifesto first published I 1937 which set the North London group at the very heart of the European Avant Garde. In it Hepworth wrote of her approach to sculpture:

‘Full sculptural expression is spatial – it is the three-dimensional realization of an idea, either by mass or by space. The materials for sculpture are unlimited in their variety of quality, tenseness and aliveness. But for the imaginative idea to be fully and freely projected into stone, wood or any plastic substance, a complete sensibility to material – an understanding of its inherent quality and character is required.’

This ‘understanding of the inherent quality and character’ is something that wonderfully abounds in her 1934 sculpture, Standing Figure, to be offered within the 12 June auction. First owned by the sculptor’s parents, the piece encapsulates all that was most important to the artist during the 1930s.

Circle brought together these artists as the leading voices of the international art scene of the day - with Moore writing:

‘I dislike the idea that contemporary art is an escape from life. Because a work does not aim at reproducing the nature appearance it is not therefore an escape from life … but an expression of the significance of life, a stimulation to greater effort in living’.

The ‘nest’ finally disbanded at the start of the Second World War, with many of the emigres dispersing (mostly to the United States) and Nicholson and Hepworth to the remote seaside village of St Ives, beginning a lifelong love affair for Hepworth, who remained there until her death in 1975. The peaceful conclave that Hampstead offered in the 1930s, whilst being simultaneously close to the centre of London, resulted in some of the most original, progressive and celebrated works created in Britain over the course of the twentieth century.

It was a period and a place that put Britain and London more specifically, at the heart of the artistic Avant Garde.

The Modern & Post-War British Art sale is in London on 12 and 13 June. 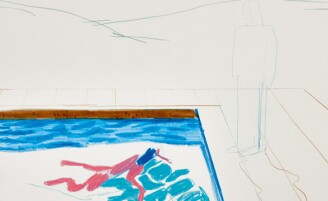