Artificial Intelligence and the Art of Mario Klingemann

By Sotheby's
Sotheby’s Contemporary Art Day Auction on 6 March features a unique creation by artist Mario Klingemann. Memories of Passersby I is a machine installation that uses neural networks to generate an infinite stream of portraits. Read on to discover more about this compelling work.

Memories of Passersby I - ARTICLE

D escribing himself as a sceptic, Mario Klingemann seeks to question and subvert traditional processes of creation and aesthetic principles in his work. Memories of Passersby I uses AI to do just this. The fully autonomous work uses a complex system of neural networks to generate a never-ending stream of portraits: uncanny and eerie representations of male and female faces created by a machine.

Each portrait is unique, and is created in real time as the machine interprets its own output. For the spectator, the experience is something like watching an act of endless imagination take place in the mind of a machine —
while the human subject matter of its visions adds a further layer of poignancy.

Klingemann’s AI was trained using of thousands of portraits from the 17th to 19th centuries, and taught his own aesthetic preferences using a Tinder-like selection application. Using its ‘memory’ of the components of a face, the machine works to generate new portraits, occasionally struggling to proceed as it calculates its intepretation, and generating results that evoke André Breton’s ‘convulsive beauty’: an aesthetics that shocks and disturbs as much as it appeals, a mix of attraction and repulsion whose principal effect is to present a surprising new perspective.

Mario Klingemann is considered a pioneer in the field of neural networks, computer learning, and AI art. His works have been shown at the Ars Electronica Festival, the Museum of Modern Art in New York, the Metropolitan Museum of Art, London’s Photographers Gallery, and the Centre Georges Pompidou, among others. In 2018 he won the Lumen Prize which recognises works of art made using technology. 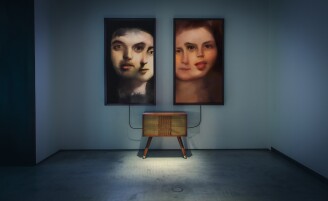