A Specialist's Guide to Collecting Silver

C ollecting silver, vertu and miniatures spans many categories across the decorative arts and the below guide is helpful in determining the enthusiast’s focus. Such acquisitions serve as much more than complements for an interior designer’s scheme. It is more an aficionado’s adventure in studying hallmarks, maps, history and even scales, than a mere afternoon browsing for trinkets; for example, items such as silver cutlery have a utilitarian aspect, but that is not the deciding factor when purchasing it. In reviewing components, the alloy in silverware is of a noble metal that radiates and invites further appraisal.

Unquestionably, the first rule is the emotion incited while looking at the object. Baroque curves or straight neoclassical lines, various dimensions, simple or intricate motifs and patterns all merge to emit a pleasant sentiment onto the connoisseur. After the visual criterion, the tactile is comes in to play. Goldsmithing is one of the rare areas of art where handling is essential. The contact with a painting or a piece of furniture does not cause the same contentment as an object of vertu. In grabbing further, the object must be heavy and solid while in one’s hands. Hence, weight is an important criterion.

The second precedent is stylistic. Its significance during its production era needs to be measured. A Louis XVI style tea and coffee service executed under Napoleon III (the famous Louis XVI-Empress style) will not have the same appeal as an exacerbated one that is typical from this period. Similarly, a Louis XV style serving set made during the Art Deco era will not really tempt beyond one or two generations.

Another interesting factor is past style and tradition influencing a future design. A noted example is Hanau, Germany during the end of the 19th century. In this southern German city, goldsmiths produced numerous objects in the Renaissance or 17th century style like pineapple-shaped coupes, steins, nautilus or coconut shells mounted with vermeil, etc. The Swiss goldsmith Brossard whose workshop was located in Lucerne, also created many pieces in this genre that are currently heavily sought after.

Many collectors choose to acquire pieces based on geographical considerations. Collecting precious metalsmith items crafted in the aficionado’s residential region has long been a way of selecting objects, especially for scholars who are both proud and knowledgeable about their locality. The publication of books on regional hallmarks and guild marks is a chance for the collector to identify unknown maker’s marks and even the purity of silver and gold used in the alloy.

Often, assay marks do not simply use numbers to indicate their year of productions, such as a lower case “c” denotes London in 1738, or initials to locate the city of production, for example a triple tower indicates Copenhagen. Recently in France, a reference book has been penned about goldsmithery in Picardy, a topic that was not previously researched.

Another method for selection would be focusing on one particular article such as deciding to amass solely German wedding coupes from the 17th century, French 18th century wine tasters or silver animal figurines by Buccellati, though this kind of collection tends to be rare nowadays.

Provenance is a key factor when choosing to assemble various services, often created in Paris, whether it is Odiot wares for the Grand Duke Mikhail Pavlovich, the Russian Tsar’s brother or those by Roettiers for the Count Grigori Orlov, Czarina Catherine II’s lover. The archetype is the Emperor Napoleon I whose silver collection was transported by the mercy of trade winds to Australia, Japan, Russia, Canada or the United States. The enlightened connoisseur can also collect pieces from a renowned goldsmith as a guideline: Biennais, Odiot, Balzac, Tiffany, Goudji or Buccellati for example.

However, the intricate and also the most fulfilling choice is, in my opinion, the decision to form an ensemble from seemingly disparate objects. The prime example is the cabinet of curiosities that mixes German 17th century vermeil artifacts, mounted shells (nautilus), curiosities from nature (like exotic taxidermy animals, coconut shells, narwhal tusk or sawfish rostrums, gleaming minerals, etc.) and scientific instruments. This trend was very popular from Prague to Paris and from the 16th to the 18th century. Each prince had his cabinet and Grand Tour travelers planned their journey accordingly for the acquisition of these marvels. 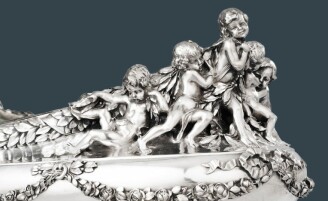