A Look Behind the History of the CBGB Awning

NEW YORK – There are few images that sum up punk rock and the New York City music scene as succinctly as the CBGB logo, emblazoned on the famous club's awning. Opened by Hilly Kristal in 1973, CBGB – known formally as CBGB’s OMFUG "Country, Bluegrass, Blues and Other Music For Uplifting Gormandizers" – quickly became the world's most celebrated venue and “underground” rock scene, welcoming legendary acts such as the New York Dolls, Blondie, the Ramones, Patti Smith, the Talking Heads, Elvis Costello, the Cramps, the Dead Boys, the Misfits, the Voidoids, the Runaways and Joan Jett and the Blackhearts. As part of the 10 December auction A Rock & Roll Anthology: From Folk to Fury, Sotheby's will offer a piece from the iconic club – one of the original awnings, which has been in the care of CBGB's former manager Drew Bushong. We spoke with Bushong about its history.

How did you come to work at CBGB?
In 2000 I saw an ad on the back of the Village Voice that they were hiring. There was a line to get in, but I was the very first person in line on the second day and they were so sick of interviewing people they hired me. I got lucky.

You were the manager, right?
In the beginning I was a door guy working two or three shifts a week. I was thinking about quitting, but then I got stabbed in the neck and handled it really well, so they promoted me to manager.

Wait, so you have to tell that story.
Sure. I actually got stabbed underneath the awning – which is a sales point I hope. [Laughs.] This guy started a fight up by the stage so I said, “Hey man, you’ve got to walk out with me.” And he was prepared with a knife in his left hand. When we got to the door he gently popped it into my neck. I thought it was just a really weak punch, so I threw him on the ground and held him there and realized when there was blood all over his face that I had gotten stabbed. Instead of calling the cops I called Hilly [Kristal], the owner of the club, and he said, “What are you doing calling me?! Call the cops!” About a month after that I was the manager. It was a violent, exciting time. I wouldn’t want to relive it now, but in my twenties and thirties, it was pretty fun.

How did you come to have the awning?
It was my day off and I was drunk at Mars Bar, the beautiful, nasty dive bar that was nearby. I think it was about 2004. I walked over to CB’s to see if anyone was around and there was this box in the dumpsters outside. I had seen it before above Hilly’s desk for a year or so. I remember thinking, “Why is this in the trash?” I woke up the next morning – shoes on, I was rather hung over – and the box with the awning in it was sitting in my bed. I learned later that it was in Hilly’s office because one of the interns was supposed to put stamps on it to send to the Cleveland Hall of Fame and it just never got there. I’ve had it under my bed ever since.

There is one awning in the Hall of Fame now, right?
There is. This awning, the one in the auction, hung from 1988 to 2003 or so, after the punk bank JFA supposedly stole the first one. In 2003 Hilly took this one down, put it in the box and never did anything with it until it came to me. The third one, which hung from 2003 to 2006 when CBGB closed, is in the Hall of Fame. There was a rumour that Spike Lee put up a different one when he filmed Summer of Sam, but I believe that to be false.

Did you ever go to CBGB before you worked there?
I did – I moved to New York City in 1999 and was working at VH1 before everyone got fired. CB’s meant a lot to me as a punk rock kid. I just thought it was the scariest, most fun looking place ever.

What do you think it represented then?
Rebellion, anarchy, everything creative both with and against the norm. Punk rock. As rock & roll used to be, a bit of danger and fear. Which was exciting for a teenager for sure.

Who were some of especially memorable musicians or acts who you saw?
There was punk of course, but I was there for more of the hardcore stuff, like Agnostic Front. I was there for the last show of the Cro-Mags with all the original people. The last year at CBGB was phenomenal. All the old acts came back, like Bad Brains and Patti Smith. I’ve seen a few different people from the Talking Heads there. I think my favourite of all time was a band called Poison Idea. There was some beautiful stuff. 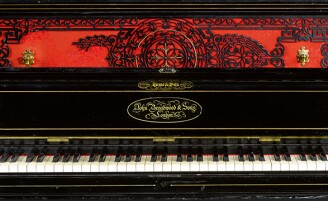 Past Auction
A Rock & Roll Anthology: From Folk to Fury
10 December 2016 | 11:00 AM EST | New York
Stay informed with Sotheby’s top stories, videos, events & news.
Receive the best from Sotheby’s delivered to your inbox.