This July’s sale of 19th and 20th Century Sculpture includes an important private collection of works from Cecil Howard’s Studio. Cecil Howard was a sculptor whose biography encompasses some of the defining moments and movements in 20th-century European and American history and culture. His seminal sculptures were made during the interwar years, when he embraced a classicising aesthetic, characterised by athletic nudes. All the sculptures in this remarkable collection come from Cecil Howard’s descendants. They represent a fascinating insight into the artist’s life, his developing sculptural styles, his techniques and his materials.

Cecil Howard was born in Canada in 1888 but moved to Buffalo, NY, in 1890, becoming an American citizen in 1896. He trained at the Art Students’ League of Buffalo, then located in the basement of Albright-Knoxx Art Gallery. In 1905 Howard travelled to Paris, settling in Montparnasse and attending the Académie Julian. Shortly afterwards, he befriended the sculptor Rembrandt Bugatti and the two travelled to Antwerp in 1909 and produced sketches at the Antwerp Zoo. His interest in animalier sculpture was, however, short-lived, and the sculptor progressed to nudes and portraiture. In 1913, at the Armory Show in New York and Boston, he exhibited his full figure Lucy Krohg, carved circa 1911-12, in which the sitter is characterised by rounded limbs and full hips. Lucy Krohg was the subject of a series of Howard’s works, in which he gradually moves towards a more svelte, elegant, figurative aesthetic (see lots 109-111). Krohg, whose real name was Cécile Vidil, was the companion of the Norwegian modernist painter Per Krohg. It was through Krohg that Howard met his future wife, Céline Coupet, in 1911.

With the advent of the Great War, Howard initially worked as a stretcher bearer in the Anglo-French hospital, before joining the Red Cross in war-torn Serbia. He eventually travelled to the United States in 1915, exhibiting at the Gorham Galleries in New York. Returning to Paris in 1916, Howard was befriended by the poet, art critic and playwright Guillaume Apollinaire, who coined the word ‘Surrealism’. Howard even appeared in Apollinaire’s Les Mamelles de Tirésias (The Beasts of Tiresias), a surrealist farce with a Cubist aspect. He played the People of Zanzibar, a non-speaking part, providing on-stage sound effects and accordion music

The friendship with Apollinaire represents an interesting backdrop to Howard’s own interests in Cubism. On his return to Paris in 1916, he made some of his most innovative and original sculptures to date, combining Cubist forms with polychromy. In sculpture they find few precedents, though they may be affiliated to similarly colourful paintings by Robert and Sonia Delaunay. The defining icon of the group is the multifaceted Accordéoniste, which, with its noisy sense of colour and motion, conjures up an image of Paris dance halls, such as the famous bal Bullier in Montparnasse. It also has a biographical aspect in that Howard himself was an accomplished dancer, specialising in the tango, and the sculpture was made at about the time he appeared with his accordion in Les Mamelles de Tirésias

The figure of Gertrude Vandebilt Whitney made an essential contribution to Howard’s career. A sculptor in her own right, Whitney proved to be a major patron throughout the interwar years. She eventually established the Whitney Museum of American Art in New York, which houses numerous works by Cecil Howard. Her first purchase from Howard was the sculptor’s La mère et l’enfant, carved en taille directe in his basement in 1918.

Throughout the 1920s, Howard exhibited both in Paris and the United States. His style arguably moves closer to that of other Parisian sculptors such as his friend Charles Despiau, famed for his elegant, classicising, nude figures. This style is ultimately embodied in one of Howard’s seminal sculptures, the Standing figure, exhibited at the Whitney Studio Club in 1928. Materials, already diverse in Howard’s oeuvre, became ever more important during this period, during which the sculptor employed Seravezza marble (see Lucy Krogh, 1920) and regularly travelled to Chassagne-Montrachet to stock up on Burgundian stone (as well as casks of wine!).

The move towards a cleaner, more athletic, idealised aesthetic runs parallel to Howard’s own sporting interests, which included horse riding and archery. Works such as the supremely elegant Baigneuse (1920) and theTireuse à l’arc (1926-1928) combine an idealised, Amazonian figure with a studied attention to physiological accuracy. The importance of classicism is underscored by the Torse de boxeur (1930) and Of the Essence, which respectively reference the Discobolus and Kritios Boy of Greek antiquity. The artist’s interest in physicality and action overrides these influences, as can be seen in the charming studies of sporting subjects Howard produced in the 1930s (lots 127-137).

During World War II, Howard was eventually forced to return to the United States, and, in 1947, he was appointed Vice President of the National Institute of Arts and Letters. His involvement in France nevertheless continued. At the end of the War, because of his French knowledge and expertise, he was drafted into the US Army, and landed at Utah Beach in Normandy just three weeks after D-Day. His monumental Sun Bath was bought for the Musée d'Art Moderne de la Ville de Paris in 1947 and Howard was awarded the Légion d’honneur by the French Republic. He continued working until his death in New York in 1956. 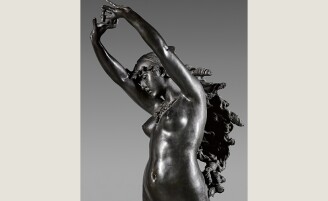