A Bridge to Canada

S imon Cole, founder and director of Toronto gallery Cooper Cole, has no formal art background. “I stumbled in through collecting and being friends with artists,” he admits. Since starting off by organising street art-focused shows at his apartment, he has expanded into two spaces – one a former silkscreen studio – next door to one another on Dupont Street. In the meantime, he has also stumbled into showing at fairs including Basel, Frieze and Independent, as well as staging shows that are regularly reviewed in publications such as Frieze and Artforum.

Cooper Cole shows a diverse international roster including Sara Cwynar, Davida Nemeroff (also known for running Los Angeles’s Night Gallery), Paul P., Jagdeep Raina and Brie Ruais. Some of the graphic sensibility of Cole’s background in skateboarding and graffiti circles can be seen among the artists he shows, but also, he says, “I have a strong interest in sculpture and working with artists with a similar material language, using found objects and recycled materials.”

“I have a strong interest in sculpture and working with artists with a similar material language, using found objects and recycled materials”

“Part of being a gallery in Canada is that the art scene here is very regional, and I’ve strived to build a bridge,” Cole continues. “That involves inviting international artists to exhibit in Canada for the first time, or showing Canadian artists abroad, maybe along with an international artist they have something in common with. It’s been a nice way to build community – to not only participate in collaborative exhibitions, but also to, say, curate a show at Night Gallery. It’s a nice way to work together with colleagues across the globe.”

Rachel Eulena Williams, Out Till Break “What I love about Rachel’s work is she literally cuts painting apart, asking, ‘What is painting?’, using traditional techniques but constructing structural works that often hang on the wall. Materials like rope stand in for a line. It’s also a cool way to recycle. The art world’s carbon footprint is insane.”


Sara Cwynar, Oops “Sara collects archival images to create massive collages. It’s a large piece and has such physicality. She uses vintage magazine ads, so the work is super-contemporary but has a retro sensibility. The piece is from 2020, a tumultuous time politically; the woman screaming is a self-portrait, wearing a Bernie T-shirt.”


Ryan Wallace, Unlanding 1 “Ryan’s approach to painting involves recycling studio detritus, creating collages that build over time. Sometimes these works reflect a natural world or a celestial realm, so the palettes reflect luminosity, and he uses powdered glass, so they have a reflective quality. They have an almost sculptural presence.”


Kate Newby, All stuff you already know “Kate often encourages viewers to touch the art. The objects represent things one might have in your pocket – a matchstick, a rock, a pin that would hold up a shelf – but skewed a little. The rock is ceramic, the matchstick silver, the shelf-pin bronze. It gives a different value to commonplace items.”


Browse the full range of artworks available from Cooper Cole at sothebys.com/gallerynetwork 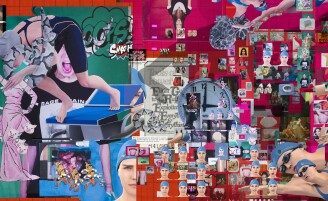 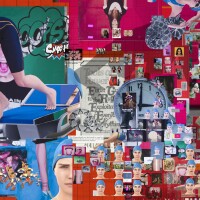 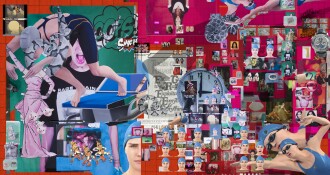