A Box Fit for a King

H istorically, Oriental rulers were keen to glorify their reign, and the symbolism of the crown in a region where conquests and invasions overthrew dynasties with more frequency than we can imagine in the modern world, must not be underestimated.

While it is speculative that an exceptional Qajar lacquer box to be auctioned in Sotheby's June 10 Arts of the Islamic World & India sale was indeed intended to store a crown, there is every indication to point to this. “A mahfazah should be made for this crown worthy of his rank”, indicates a border inscription on this unusually large and majestic object. Illustrations on the band around the top are identified as Bahram in various pavilions, as well as images from the Haft Paykar and Nizami’s Khamsah. Those on the main body of the box are identified as various scenes from Firdawsi’s Shahnameh, the epic poem that in many ways defines traditional Persian identity and culture.

The medium of lacquer painting has long occupied an esteemed status among Persian arts, dating back to the fifteenth century. Under the Qajars in the nineteenth century its popularity and trade peaked, and the craft was perfected. Unlike East Asian lacquer, in Persia artists used a brush or pen to apply decoration to a prepared surface through multiple layers of water-based paint and oil-and-resin-based varnishes. Most lacquerware took the form of small containers such as pen-boxes, mirror cases, caskets, and book covers which offered only a small surface area for decoration. The royal box in the Sothebys Islamic sale is exceptional therefore, for its dimensions and high number of surfaces, enabling the painter to create a magnificent array of scenes while sustaining the masterly attention typically found in comparable works and miniature painting.

The eight panels adorning the body of the box and sixteen smaller faces of its lid intermingle depictions of formal audiences, enthronements, dancing and dining within lattice-work terraces and splendidly decorated rooms, as well as outdoor scenes which draw from Persian classics. This monumental box therefore becomes a self-contained picture gallery. The artist who executed the beautiful decorations emphasizes artistic continuity while linking the current ruling dynasty back to a period remembered in collective memory as a golden age of Persian civilization. A rare and iconic artefact, this box will appeal to lovers of Persian culture as well as collectors of unusual and fascinating objects. 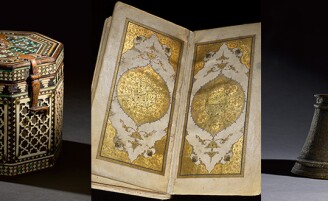