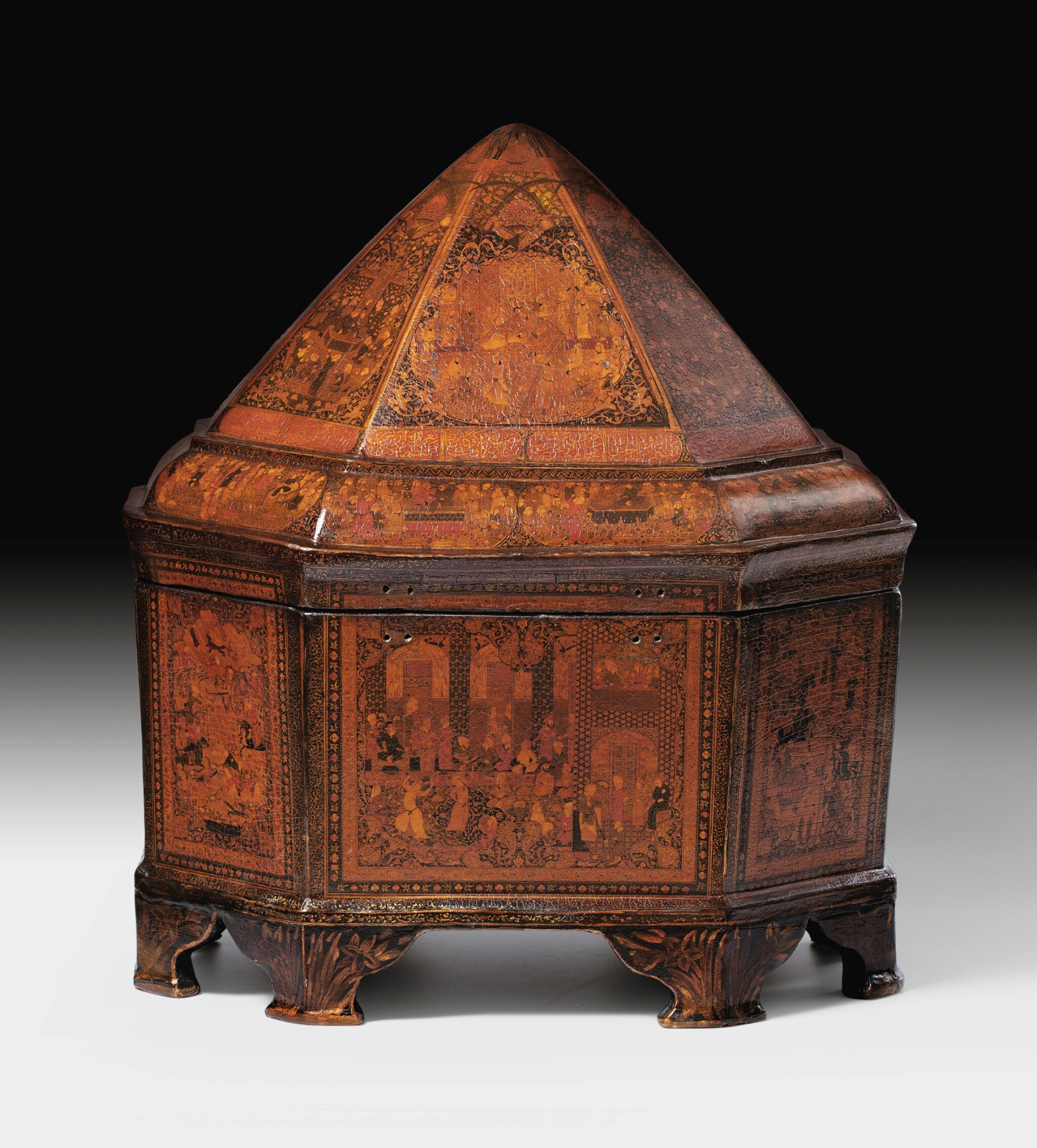 of octagonal form, with a pyramidal lid, decorated in lacquer with courlty and literary scenes, with associated inscriptions and annotations, with spurious date 1026 AH/1617-8 AD

In good condition, the surface with craquelure throughout, some drill holes to sides perhaps where hinge and locks would have originally been, some nicks and small scratches consistent with use, as viewed.

Dated identically twice, once above a door, with the identification of the scene as: ‘the assembly of Sultan Mahmud Ghaznavi with Firdawsi’ and once above the image identified as ‘Iskandar mourns over the dead body of Dara’, ‘The year 1026 (1617-18 AD)’.

Written in a fine hand, with a qasidah invoking God to protect the just king (unnamed), his kingdom and his army, using the word mahfazah four times, and the word taj (crown) three times. One couplet notes that: "A mahfazah should be made for this crown worthy of his rank", indicating that this box must have made to hold a crown.

Those in the band around top are identified as Bahram in various pavilions, and those are from the Haft Payker and also from Khusraw and Shirin of Nizami’s Khamsa.

Those on the main body are identified as scenes from Firdawsi’s Shahnamah, including ‘Battle of Rustam with the Chinese emperor’, 'Kay Khusrwa kills Afrasiyab’, ‘Kay Khusraw’s banquet’, 'Rustam shoots Afrasiyab in the eye with an arrow’ and 'Afrasiyab cuts off Siyavakhsh’s (sic) head'.

The medium of lacquer painting has long occupied an esteemed status among Persian arts dating back to the fifteenth century. During the nineteenth century under the Qajar Dynasty its popularity, production and trade peaked. Flourishing in a number of centres in Iran, Persian lacquer is technically distinct from East Asian lacquer. Rather than treating objects with sap, artists of the Qajar period used a brush or pen to apply decoration to a prepared surface through multiple layers of water-based paint and oil-and-resin-based varnishes (lacquer) (McWilliams 2017, p.28). Most Qajar lacquer wares took the form of small containers, principally pen boxes, mirror cases, caskets, and book covers, which offered relatively restricted formats for decoration. The present royal box is exceptional, therefore, for its large dimensions, intended to hold a Royal crown. Its high number surfaces enabled its painter to create a magnificent programme of scenes while sustaining the masterly attention to detail found in comparable works in miniature painting.

Qajar lacquer objects feature decoration as varied as the functions they served and the audiences they reached. Accordingly, the present royal box – perhaps an official gift or a presentation piece – is illuminated with a series of images of courtly life both contemporary and legendary. The eight panels adorning the body of the box and sixteen smaller faces of its lid intermingle depictions of formal audiences, enthronements, dancing and dining within lattice-work terraces and splendidly decorated rooms, as well as outdoor scenes which draw from classics of Persian literature. Appreciation of its decorative programme requires the viewer to view the box in the round and read the accompanying inscriptions, examining each panel in turn. A characteristic and compelling exposition of Persian royalty, the monumental box becomes a self-contained picture gallery.

Some of the most dramatic and distinctive panels of the box illustrate scenes from the renowned Shahnameh or ‘Book of Kings’. Telling of the cyclical rise and decay of rulers and dynasties, the struggles of heroes and kings, the Shahnameh is celebrated as a seminal document of Iranian cultural identity. Multiple panels of the present lacquer box, for instance, represent feats of the legendary hero Rustam sporting his iconic lionskin headdress. By recourse to subjects from canonical literature and motifs from Safavid-era illumination, the artist who decorated the present box emphasises artistic continuity while linking the current ruling dynasty back to a period remembered in collective memory as a golden age of Persian civilisation.