The Collection of Howard and Saretta Barnet is a journey around the world and across nearly 3,000 years of art history. Included in their superb collection are five magnificent Olmec works of art, masterpieces that exemplify the extraordinary talent of this early civilization and demonstrate their unique artistic style and symbolism. But who were these carvers of stone? Here are some must-know facts about Olmec Art.

1. The “Mother-Culture” of Mesoamerica
The Olmec civilization is the oldest in Mesoamerica, having developed along the Gulf Coast of southeast Mexico by 1700–300 BC. The cultural and artistic development of these “people of the rubber” – as the Aztecs called them– paved the way for later Mesoamerican civilizations and the influence of their artistic symbolism and complex institutions traverses all of Mesoamerica.

2. The Colossal Heads
The most famous of the Olmec works are the monumental basalt heads of rulers, which were first rediscovered in the late 19th century. Seventeen of these have been unearthed in the Olmec heartland of modern day Mexico. These mysterious sculptures range from 6 to 11 feet high, and weigh up to 40 tons and depict important rulers with fleshy naturalistic features and distinctive headgear.  The effort required to move, sculpt, and install these sculptures represents an astonishing feat of human labor and a highly developed social organization.

3. Cherished Objects
The Olmec excelled in working one of the hardest stones on earth: Jade. Highly refined small-scale sculptures in this material elegantly express the human form and are a striking contrast to the bold monumentality of the colossal heads.  These jewel-like objects range from minimally carved celts (elongated stone tools) to highly ornate incised masks. The finest colored stones were reserved for the most important objects, worked by the most talented carvers.  So highly prized were the masks that they were cherished as heirlooms and passed down for generations, and traded as important symbolic currency.

4. “A gift from the river”: the Power of Maize
Surrounded by bodies of water, Olmec civilization depended upon the maize crop, corn – which was the most important resource of the ancient Mesoamerican world.  Rivers periodically flooded this fertile region, enabling the Olmec to cultivate a surplus of maize.  The maintenance of this agricultural cycle was at the center of Olmec cultural and religious life, and priestly rulers accrued power and prestige.

5. Birds, Jaguars, and Serpents
For the Olmec, the natural world was divided into three realms: sky, earth, and water.  Powerful animal spirits presided over each: birds, jaguars and serpents.  Representations of these three important animals comingled in the complex symbols seen in Olmec art.

6. Divinely-Appointed Messengers
In Olmec culture, individuals with dwarfism were considered to have special abilities to communicate between the human and the divine. Their frequent depiction in Olmec monuments and sculpture affirms this sacred status and important role.  The Olmec stone figure of a kneeling dwarf from the Barnet Collection is shown in a reverential posture of worship, covered with complex symbolic emblems including a maize pouch, and representations of the harpy eagle, references to the natural world.

7. A Stone More Precious than Gold
Jade was the most highly valued material in the Olmec world. Acquired by trade from distant sources, the natural colors ranged from white to blue-green to apple green.  The beauty of this medium symbolized the sacred power of the natural world and its most important bounty: water, and maize. 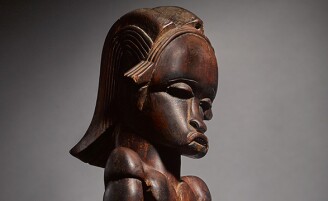