1. Zao Wou-ki was a Chinese painter who spent much of his life in Paris. Born in Beijing in 1920, he trained at the School of Art in Hangzhou where he learned brush-and-ink techniques and the traditions of Chinese art history. He studied under Lin Fengmian, who practiced a hybrid of European modernism and Chinese forms and would eventually become known as a pioneer of modern Chinese painting. Fengmian was later imprisoned during the Cultural Revolution and persecuted because he worked outside of the confines of socialist realism. 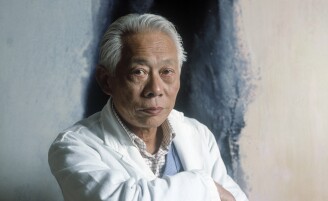 Discover More About The Artist

2. After moving to Paris in 1948, Zao rejected the more classical conventions of his training in favor of Western abstraction, but by the early 1970s, he returned to the original sources of his Chinese academic training, producing works that synthesized classical with contemporary, and East with West. “Everybody is bound by tradition. I am bound by two.”

3. Zao idolized Matisse and Picasso, and was welcomed in Paris by a circle of influential cultural figures and artists including Alberto Giacometti, Joan Miró and Henri Michaux. Miró and Picasso were supporters of Zao’s career and praised his early work.

4. Returning to Chinese calligraphic techniques through the lens of European modernism, Zao explored the variations inherently possible in brush and ink calligraphic forms, rather than focusing on the meaning of characters.

"Although the influence of Paris is undeniable in all my training as an artist, I also wish to say that I have gradually rediscovered China. In my recent paintings, this is expressed in an innate manner. Paradoxically, perhaps, it is to Paris that I owe this return to my deepest origins.”

5. Zao produced abstract paintings that linger in the world of landscape, and seem to access the cosmic realm, using light to question the nature of the universe itself. By bridging classical Chinese brush techniques and Western abstraction, his canvases reflect earthly and celestial existence.

6. With artist Pierre Soulages, Zao traveled to New York in 1957, where he was inspired by the work of Abstract Expressionists including Franz Kline, Philip Guston and Adolph Gottlieb. He expanded the scale of his canvases, and developed a daring approach that signaled his “Hurricane Period” that he sustained for thirteen years. He created dazzling oracle bone abstractions with bold contrasts and complimentary colors that reflect the matter and voids of the universe.

7. In a 1962 interview with Preuves magazine in France, he explained the vacillation of his focus and approach over the trajectory of his career, “Although the influence of Paris is undeniable in all my training as an artist, I also wish to say that I have gradually rediscovered China. In my recent paintings, this is expressed in an innate manner. Paradoxically, perhaps, it is to Paris that I owe this return to my deepest origins.”

8. Zao was known for his charismatic personality and generous heart that attracted ever-widening circles of friends across three continents, within and outside of the art world. In some instances these friendships advanced his career, or allowed him to explore media other than painting and printmaking.

9. Zao sustained a lifelong friendship with architect I.M. Pei after meeting in Paris in 1951. The pair collaborated on many projects together and shared their realities as major artists with complex cultural backgrounds. They consistently advanced each other’s careers. In 1982, Zao introduced France’s minister of culture, Emile Biasini, to Pei, which led to Pei’s famous glass pyramids in the courtyard of the Louvre. In 2006, Pei suggested Black & White Dream, the inaugural exhibition at the Suzhou Museum, which he designed. The exhibition put Zao’s work in dialogue with younger artists Xu Bing and Cai Guo-Qiang, bridging generations of Chinese artists and contextualizing Zao’s work as a major international artist.

10. Zao enjoyed collaborating with artists who worked in media other than painting. In 1979, he worked with the Chiang Ching Dance Company to produce a series of slides of his paintings as the set for a performance at the Henry Street Settlement Playhouse in New York.

"They reveal hidden meanings, those of the universe…What I love above all in poetry is the feeling of freedom, of moving about in words."

Zao Wou-ki on painting and poetry

11. His close friendship with poet Henri Michaux began when the author produced eight poems to accompany eight of Zao’s early lithographs. The poems and prints appear in Reading by Henri Michaux of Eight Lithographs by Zao Wou-ki, the artist’s first collector’s book, published in 1950.

12. After moving to Paris, the artist became close friends with Jacques Chirac, a big admirer of Zao’s painting. Chirac wrote the preface to the catalogue for Zao’s first major retrospective in Shanghai in 1998.

13. Beginning in the late 1950s, he titled his canvases with only the dates of their completion, negating any potential associations of subject, and marking the evolution of his oeuvre.

14. Zao often utilized the imagery and common appearance of poetry in traditional Chinese painting. He explained what most appealed to him about the intermingling of poetry and painting, “I feel these two forms of expression as being, physically, of the same nature. They both express the breath of life, the quivering of the brush on the canvas or of the hand on the paper as the character is formed. They evoke without representing, they reveal hidden meanings, those of the universe…What I love above all in poetry is the feeling of freedom, of moving about in words.”

15. Zao was made an Officer of the Légion d’Honneur in 1984 at the proposal of the French Minister of Culture, Jack Lang. He was promoted to Commander by President François Mitterand in 1993, and again to Grand Officer in 2006 at the request of President Jacques Chirac.

16. Zao was married three times. He had a son with his first wife composer La-lan before divorcing in the mid 1950s. He met his second wife, actress Chan May-Kan in Hong Kong in the late 1950s; during their marriage, Zao encouraged her to develop her career in sculpture to much success. Chan committed suicide in 1972 after battling mental health issues. His third wife and widow Francoise Marquet, whom he married in 1977, is the president of the Zao Wou-Ki foundation.

17. Zao Wou-Ki had three retrospectives at major museums around the world in the span of one year in 2004: Zao Wou-Ki, une Quête du Silence at the Museum of Fine Arts in Dunkirk, Zao Wou-Ki – Hommages, at the Musée Fabre in Montpellier, and a retrospective organized by the Ishibashi Foundation at the Bridgestone Museum of Art in Tokyo.

18. In 1994, Zao received the Praemium Imperial for painting from the Imperial family of Japan, alongside Richard Serra for sculpture, Charles Correa for architecture, Henri Dutilleux for music, and John Gielgud for theater.

19. Wou-ki translates to ‘no boundaries’ in English, an apt moniker for the artist who transcends geography, chronology, nationality, materials and subject to access universal truth and beauty.

20. Jacques Chirac was such an admirer of Zao’s work, that the former president’s ministers offered him a Zao Wou-ki painting as a gift on the day of their last meeting.

21. Zao Wou-ki suffered from Alzheimer’s disease in the final years of his life, and stopped painting due to complications and physical limitations. He lived in Switzerland during these years, until he died in 2013 at the age of 93.