Who Are Les Nabis?

“Remember that a picture, before being a battle horse, a female nude or some sort of anecdote, is essentially a flat surface covered with colors assembled in a certain order.” So began the manifesto of Les Nabis, a group of young French artists who played a vital role in the extension of the Impressionist project—the subtle evocation of natural light and atmosphere—into the more personally expressive realms of Expressionism and Abstraction.

The group took their name (pronounced lay-naw-bee) from the Hebrew word n'vi'ím (נְבִיאִים), meaning prophets, as the artists viewed themselves as prophets of modern art who sought to renew painting as the ancients had renewed Israel.

They were greatly inspired by Japanese woodblock artists, the English Pre-Raphaelites, and above all their countrymen Paul Gauguin and Paul Cézanne; drawing from these rich sources, they worked in a diverse range of styles and media, blazing not one continuous trail but a dozen circuitous garden paths leading into the major avant-garde movements of the twentieth century.

Characteristics and Style of Les Nabis

Other than their frequent use of simplified fields of bright color, Les Nabis were unified less by a defined style than a shared conviction that, as Denis wrote, “art is no longer a visual sensation that we gather [but] a creation of our spirit, for which nature is only the occasion.”

As a part of their expansive philosophy, Les Nabis wished to blur the delineation between fine art and decoration and many produced not only easel paintings but functional objects like dishware and lampshades, as well as theatrical pieces like puppets and costumes, and graphics like advertising posters and book illustrations.

From the start, Les Nabis were strongly influenced by contemporary literature – particularly the Romantic and Symbolist poetry of Baudelaire, Mallarmé, and Edgar Allan Poe – and it was the poet Henri Cazalis who first proposed the group's name. The studio shared by Bonnard, Vuillard and Denis at 28 rue Pigalle was frequented not only by the other Nabis painters but by various figures from the Paris literary world. Chief among these was Pierre Veber, whose comedic plays of the period included Julien n'est pas un ingrat, which premiered at the Théâtre Antoine in 1898, and whose novels included Les Couches profondes, published by Empis in 1899. In addition, Denis illustrated editions of Paul Verlaine's Sagesse and Alfred de Vigny's Éloa, while Vallotton produced drawings for La Maîtresse by Jules Renard.

Impact and Legacy of Les Nabis

Like so many meteoric movements of the early modernist era – De Stijl, Der Blaue Reiter, Dada – the length of the group's tenure is inversely proportional to the depth of its influence on subsequent generations of artists. Les Nabis prefigured the development of Fauvism, Cubism and German Expressionism in the first years of the 20th century, which in turn set the stage for the ascendance of Abstract Expressionism, in both its painterly and post-painterly iterations, in the postwar period. Less distally, many contemporary artists have acknowledged a debt to Les Nabis, including Howard Hodgkin, Lisa Yuskavage and Wadie El Mahdy.

The work of the original Nabis are represented in numerous important institutional collections, including the Metropolitan Museum of Art in New York, the Petit Palais Museum in Paris and the Hermitage in Saint Petersburg.

Naught beside it is real;

Life is the flash in black heavens;

We see but in dreams the ideal.

Have Something to Sell?
Wonder how much your art or object might be worth and how to sell it? Simply follow the steps below and Sotheby's will recommend the best approach for selling your item.
Get Started 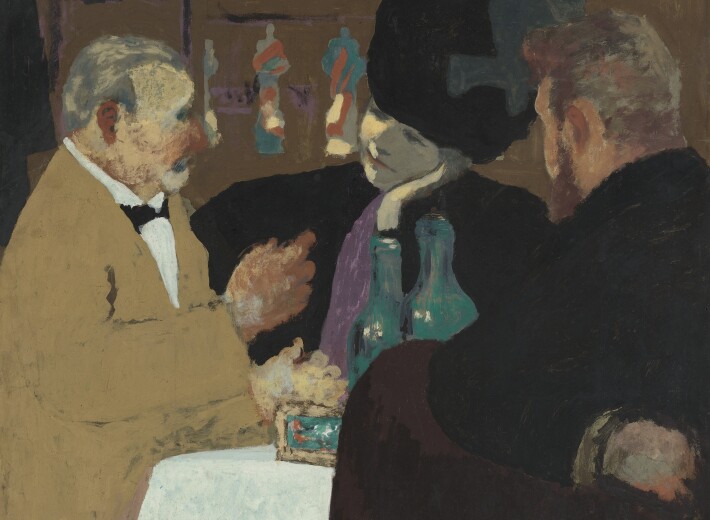