Au Marché, a stunning work by the celebrated avant-garde painter Félix Vallotton, will lead the Swiss Art-Swiss Made sale in Zurich on 29 November.

The vibrant work from the artist’s highly sought-after Nabi period is a masterpiece of great rarity from one of the most important artists of the early 20th century and comes to auction after more than 60 years in private hands.

Au Marché is a fascinating example of Vallotton’s work during his Nabi period, the most sought-after for the artist and one which would prove crucial for the rest of his career.

The work depicts a scene at the heart of late 19th-century Paris, in the bustling market of a popular neighbourhood. Félix Vallotton brings the characters to life, using strong outlines and bold unmediated colour alongside textured surfaces - motifs characteristic of the Nabi movement.

This artists' collective found great inspiration in the work of Paul Gauguin and used everyday subjects in order to express personal emotions and the artist’s inner reality.

For Vallotton, the visual expression of the Nabi philosophy drew strongly on his fascination with Japanese woodcuts, and this composition is reminiscent of that technique.

His choice of subject – a snapshot of real life, expressed through his eyes – brings to mind the bold illustrations for which he had also become well-known, as a contributor to the literary magazine La Revue blanche.

Speaking about the work, Stephanie Schleining and Urs Lanter, Joint Heads of Sotheby’s Swiss Art department, commented: "This stunning work by Félix Vallotton is a very exciting discovery for the market, which has shown, time and again, a great appetite for works from the artist’s famous Nabi period.

"Showcasing the painter’s characteristic style, the composition is a wonderful illustration of Vallotton’s unconventional depictions of everyday life. The painter ranks among the most important artists of Post-Impressionism, a master of the avant-garde whose works appeal to a wide international audience." 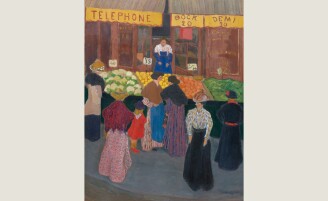