Wassily Kandinsky, born in 1866 and died in 1944, was one of the most influential artists of the 20th century. He is credited as one of the most important pioneers of abstract work, thus changing the course of Art History. Kandinsky developed his abstract style with the express intent of being accessible to all audiences. Shocked by the events he witnessed, Kandinsky sought to create a language which could be understood by all. Unlike other works of art in which the audience is perhaps expected to know a mythological scene or understand references made within the work, abstract art requires no previous knowledge to be moved by the emotions expressed. Abstraction conveys, in a universal idiom, emotion and ideas.
A selection from The Triumph of Color: Important Works from a Private European Collection traces Kandinsky’s philosophy and evolution through 4 key works in his oeuvre. – Josy Wollak 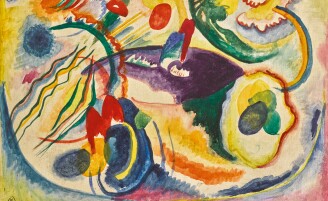