From 17 July to 9 August, Sotheby's will host an exhibition celebrating the story of the pioneering émigré art dealers who transformed the London gallery scene, introducing artists such as Naum Gabo, Oskar Kokoschka, Kurt Schwitters and Francis Bacon to post-war Britain. Along with a programme of talks, works by Ben Nicholson, Graham Sutherland and Lynn Chadwick will be on display. Click through for highlights.

The exhibition is part of INSIDERS/OUTSIDERS, a year-long nationwide arts festival celebrating refugees from Nazi Europe and their impact on British culture. Participating venues include Tate Britain, the National Portrait Gallery, the Wallace Collection, Glyndebourne and Pallant House Gallery. 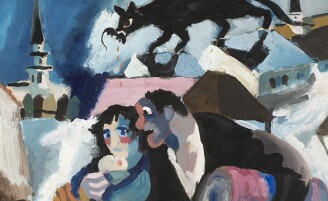