T he Orientalist Sale brings together paintings representing the landscapes, people and cultures of North Africa, Egypt, the Levant, Arabia and the Ottoman world during the nineteenth and early twentieth centuries.

This seasons sale includes a rare work in the oeuvre of Frederick Arthur Bridgman titled Prayer in the Mosque, Cairo, painted in 1876, shortly after his trip to Cairo in the winter of 1873-74 and depicting worshippers in a variety of prayer positions. Bridgman's master, Jean-Léon Gérôme also features in the sale with a critically reinstated work from 1858 titled At Prayer as well as the earliest version of one of the artists's seminal compositions Prayer in the House of the Arnaut Chief from 1857.

Other highlights from the sale include a bustling panorama of Bulak in Cairo by Adolf von Meckel as well as a view from Edwin Lord Weeks inside the wall of old Tangiers, Morocco. 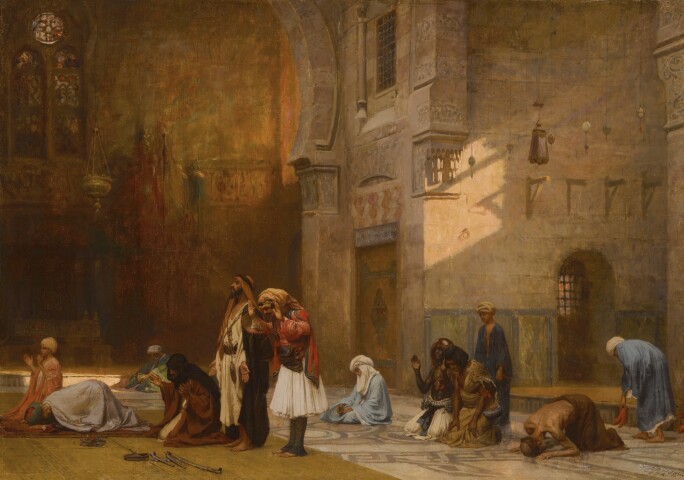 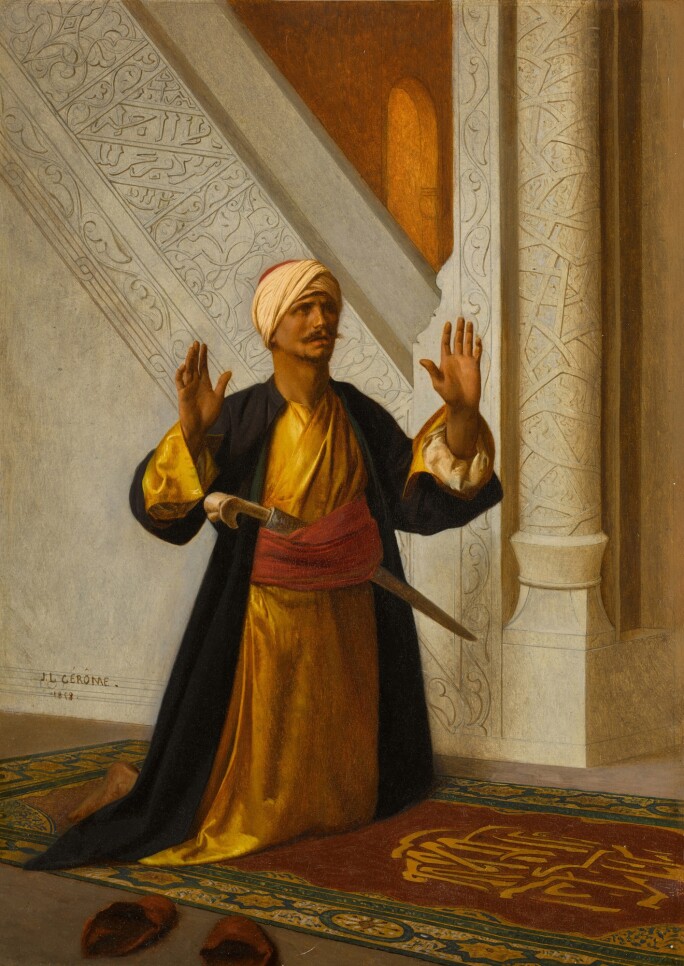 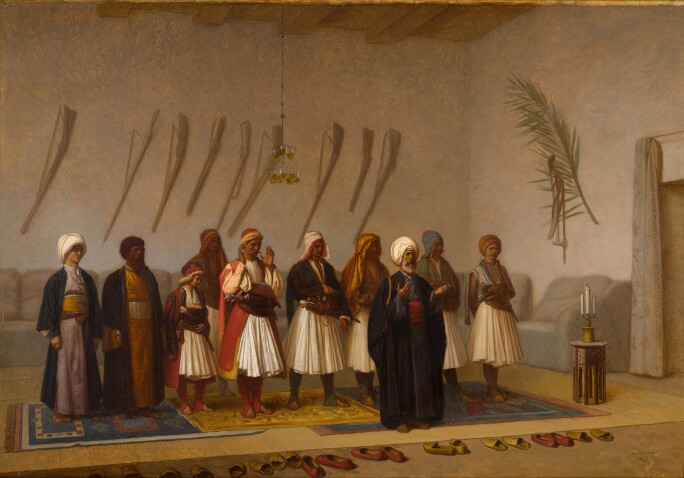 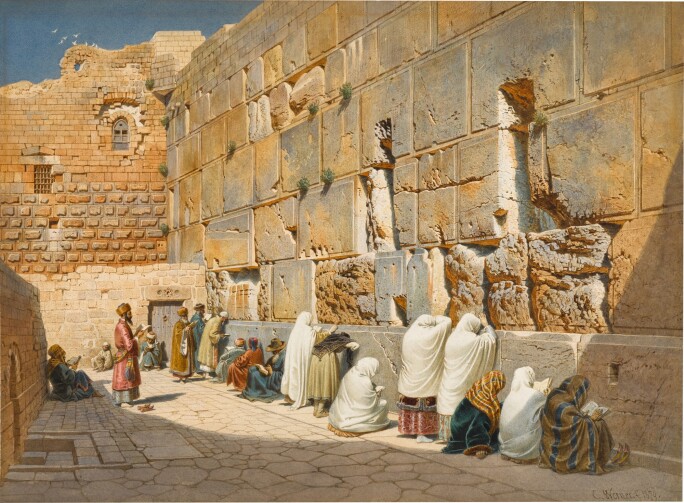 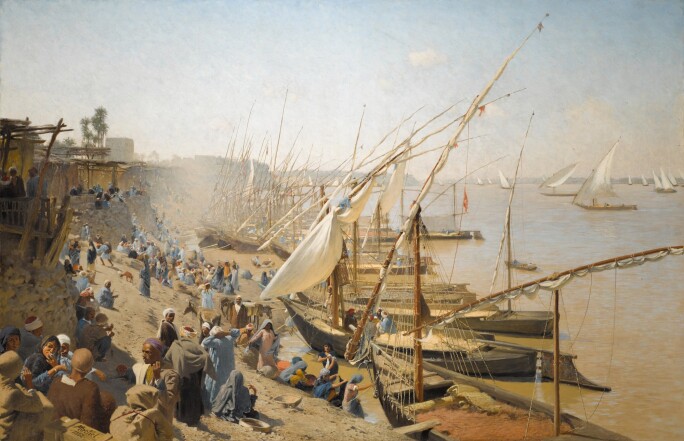 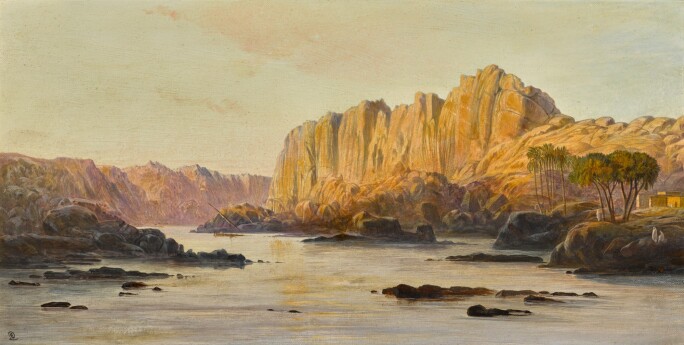 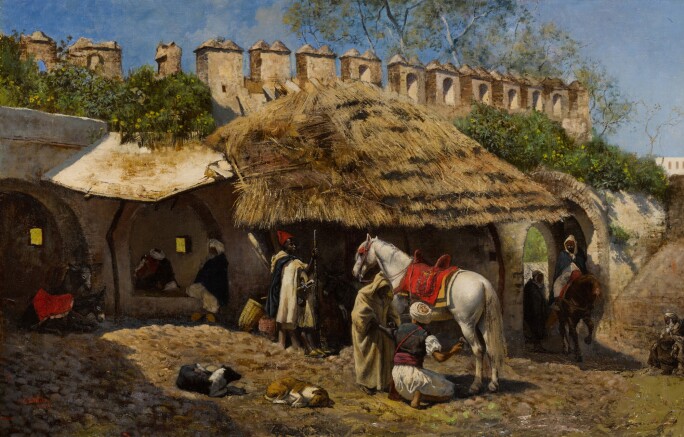 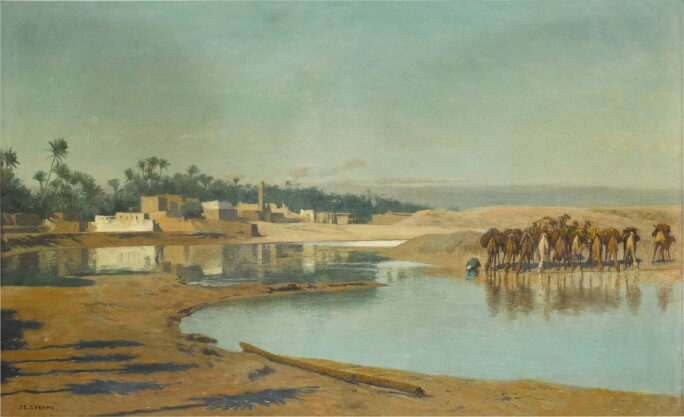 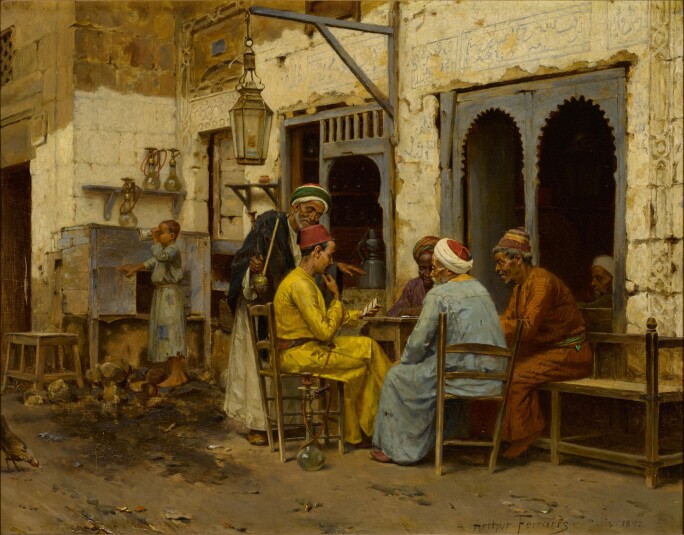 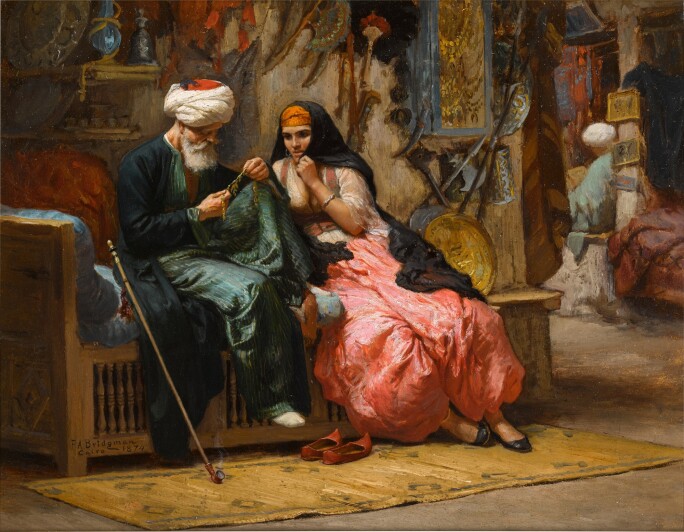 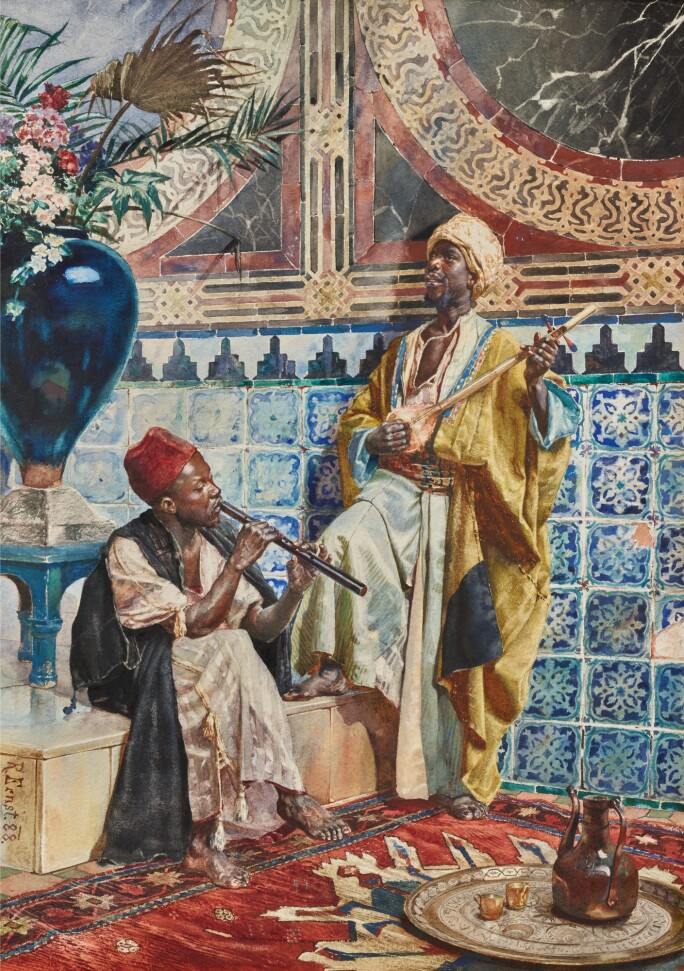 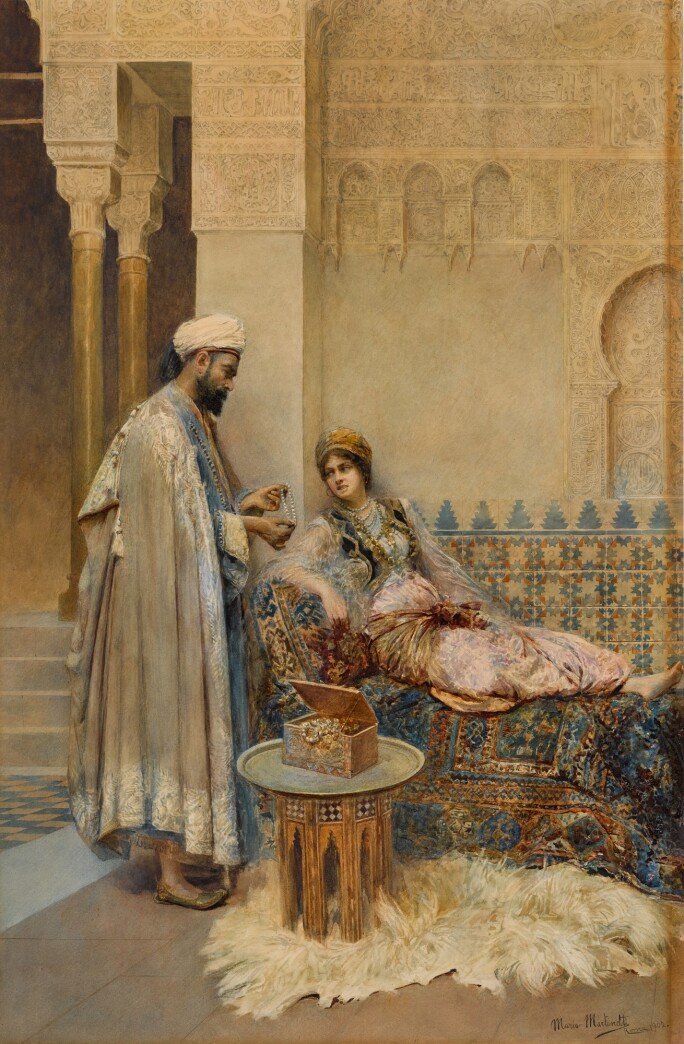 This summer, a painting of a man at prayer was the subject of a rigorous investigation by the BBC’s Fake or Fortune programme, conducted by Philip Mould and Fiona Bruce. In the closing moments, as the presenters were in receipt of a critical re-appraisal by art historian and acknowledged expert on the leading 19th-century French artist Jean-Léon Gérôme, Emily Weeks, the painting was reinstated into the canon of Gérôme’s oeuvre. The result was a vindication for the owner of the work, the Los Angeles based artist Jon Swihart, who had acquired the painting for $6,325 at auction in New York in 1999, when it was attributed to the Studio of Jean-Léon Gérôme. When he bought it, Mr Swihart felt intuitively that the picture was by the artist’s hand, even though from the 1980s it had been deemed a collaborative work by the late art historian and leading Gérôme expert, Gerald Ackerman.

Over the course of the investigation, Fiona Bruce visited Sotheby’s in London to speak on camera with Claude Piening, a senior specialist of Orientalist art and Head of Sotheby’s 19th Century European Paintings department. Now, following the positive outcome, Sotheby’s will offer the picture as a lead highlight in The Orientalist Sale, open for bidding from 20 October 2021. Estimated at £80,000-120,000, At Prayer joins the ranks of Gérôme's earliest pictures and was painted in 1858, shortly after his first trip to Egypt in 1856.

This month’s Orientalist Sale is distinguished by a strong representation of works not only by the leading nineteenth-century French Orientalist Jean-Léon Gérôme, but by artists who cut their teeth as painters in his studio at Paris’s Ecole des Beaux-Arts and went on to enjoy successful careers in their own right. Chief among them was Frederick Arthur Bridgman, the American from Alabama who had arrived in France in 1866. Due to popular demand (only the best students were admitted and they considered it an honour to be selected) his admission into Gérôme’s studio had taken some doing.

‘The ministers had protested that the ateliers were full, and the American Embassy was tired of interceding. A friend of Bridgman’s, fellow-artist Thomas Eakins, took matters into his own hands. Pretending to know no French, he talked his way into the office of the Minister of Education and, ‘bearding the Comte de Nieuwerkerke in his den’, got the minister to sign a pass for the whole list of American aspirants. This list included Eakins himself, Bridgman, Earl Shinn and Harry Humphrey Moore.’

Gérôme progressed his students through drawing from antique works, casts and followed by life study with live models generally selected on the basis of their physique, but occasionally for their facial expression in a sequence of exercises known as the académie. Students drew parts of a bust before the entire bust, then parts of the live model before drawing full figures. Only when they had mastered sketching were they permitted to work in oils. They were also taught to draw clearly and correctly before consideration of tonal qualities. In his studio, the floor sloped so that students had the fullest view of the model from the rear of the room. Students sat around any model in order of seniority, with the more senior students towards the rear so that they could draw the full figure, while the more junior members sat towards the front and concentrated on the bust or other part of the anatomy. However, the Apollonian academic rigour of Gérôme’s painterly style belies the rather more Dionysian atmosphere that prevailed in his studio. According to John Milner, who studied with Gérôme, his atelier was the most boisterous of all the studios at Beaux-Arts. Students were treated to bizarre initiation rites which included slashing each other’s canvases, and staging fencing matches on the models’ dais with paintbrushes loaded with paint.

Gérôme attended the Ecole every Wednesday and Saturday, demanding punctilious attendance to his instructions. His reputation as a severe critic was well-known. One of his American students, Stephen Wilson Van Shaick, represented in the current sale, commented that Gérôme was ‘merciless in judgement’ yet possessed a ‘singular magnetism’. Although Gérôme was very demanding of his students, he offered them considerable assistance outside Beaux-Arts, inviting them to his personal studio, making recommendations to the Salon on their behalf, and encouraging them to study with his colleagues. Between 1864 and 1904, more than two thousand students received at least some of their tuition in Gérôme's atelier, taking with them the firmest grounding in the tenets of academic painting. 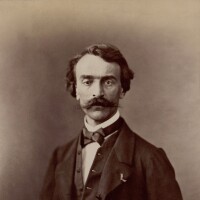 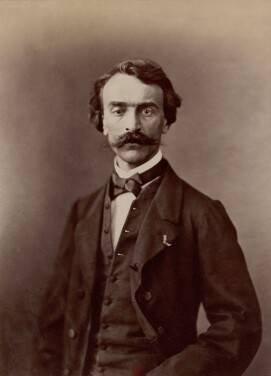 Women artists are well represented in the sale, with fine examples by Gerda Wegener, Maria Martinetti and Clelia Bompiani-Battaglia.

Gerda Wegener broke through boundaries set for her as a female as well as societal assumptions about gender. She was also a competent and courageous artist. She lived in Morocco for five years after she married Fernando Porta in 1931 and embraced the colours and beauty of Morocco. She depicted a number of paintings during this time, subjects ranging from landscapes, newlyweds and Moroccan women. In her distinct style of strong lines and curving surfaces, Shepherd in the Atlas Mountains captures a Bedouin or Berber seated in quiet contemplation surrounded by a vast landscape.

Maria Martinetti, an Italian artist, greatly inspired by her friend the Orientalist painter Gustavo Simoni, depicts an intimate interior based on the observation of photographs and objects and costumes from North Africa.

The popularity of Orientalism as a genre among Italian artists given expression by another work on paper by fellow Italian Clelia Bompiani-Battaglia. She was taught by her father, Roberto Bompiani and studied at the Accademia di San Luca. 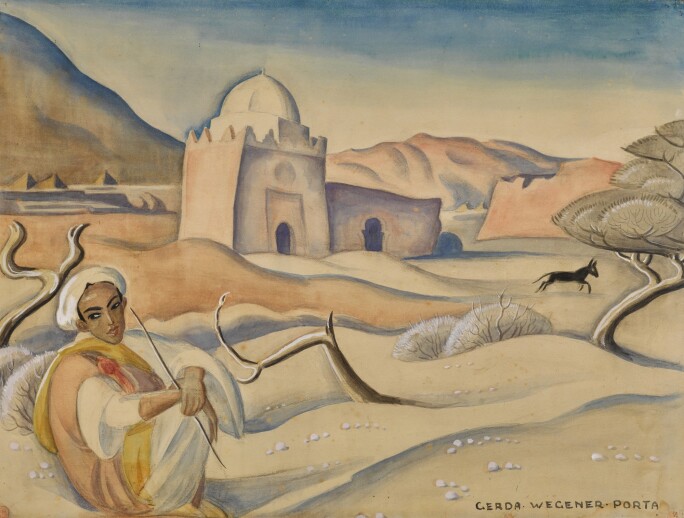 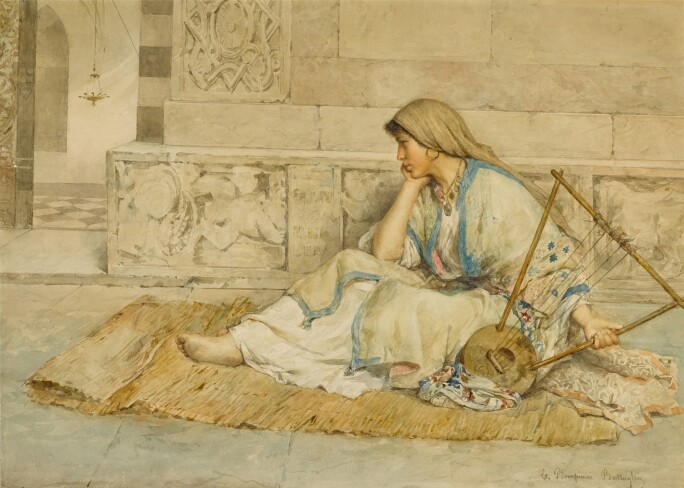 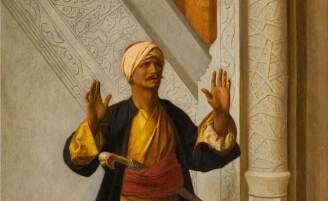