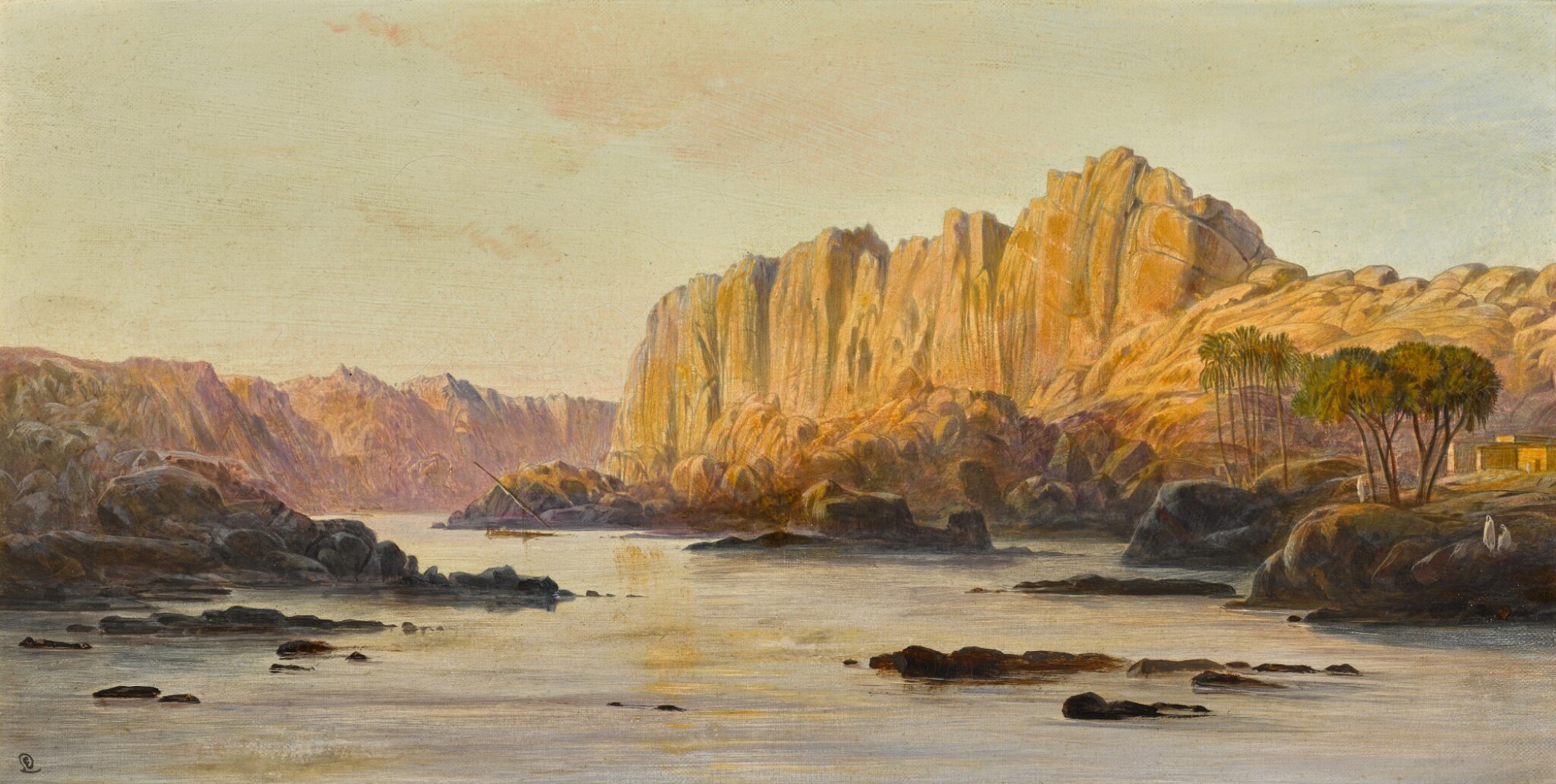 The canvas has not been lined and is providing a strong and stable support to the paint surface. There is an uneven and discoloured varnish layer and some surface dirt. The work would likely benefit from a clean. There is some craquelure notably to the centre. Otherwise the work appears in good condition, ready to hang.

This recently rediscovered oil, painted in 1871, is appearing for the first time at auction having remained in private hands for three generations. The painting provides a fascinating record of old Kalabsha, situated on the Nile about 50km south of Aswan and now submerged under Lake Nasser. A lone dhow graces the water in the distance, while figures amble to the edge of the river on the right. The rocks glow in the desert heat and a tinge of pink bathes the left edge of the river bank that curves out of sight. The clear and brilliant colour of Egypt and in particular the Nile, both challenged and astonished Lear, and the present work is a culmination of this admiration.

Lear had previously sketched Kalabsha on his third visit to Egypt in 1867. Early in the year he painted areas around Dendour and Philae and notably at 5.10pm on the 16 February painted at 'Bab el Kalabshe' according to an inscribed watercolour now in the collection of the Yale Centre for British Art. Two days later he was ‘between Daboad & Phila’ and produced a watercolour of a large boat on the river’s bank, and subsequently two other watercolours executed in February 1867 feature the same vessel. This might have been the ship he was travelling on and the same as that he chose to depict in this oil, painted four years later.

After extensive travelling through Europe and the Middle East, in March 1871 Edward Lear settled in San Remo, where he built a house he called Villa Emily after his friend and wife of poet Alfred Tennyson. He published Nonsense Songs, Stories, Botany and Alphabets which included his famous nonsense song, The Owl and the Pussycat. He also executed a number of oils re-visiting his sketches, studies and notes from Egypt, producing the present work, and paintings titled Nile boats near Deir el kadige, Sunset on the Nile, above Aswan and Negadeh, on the Nile near Thebes.