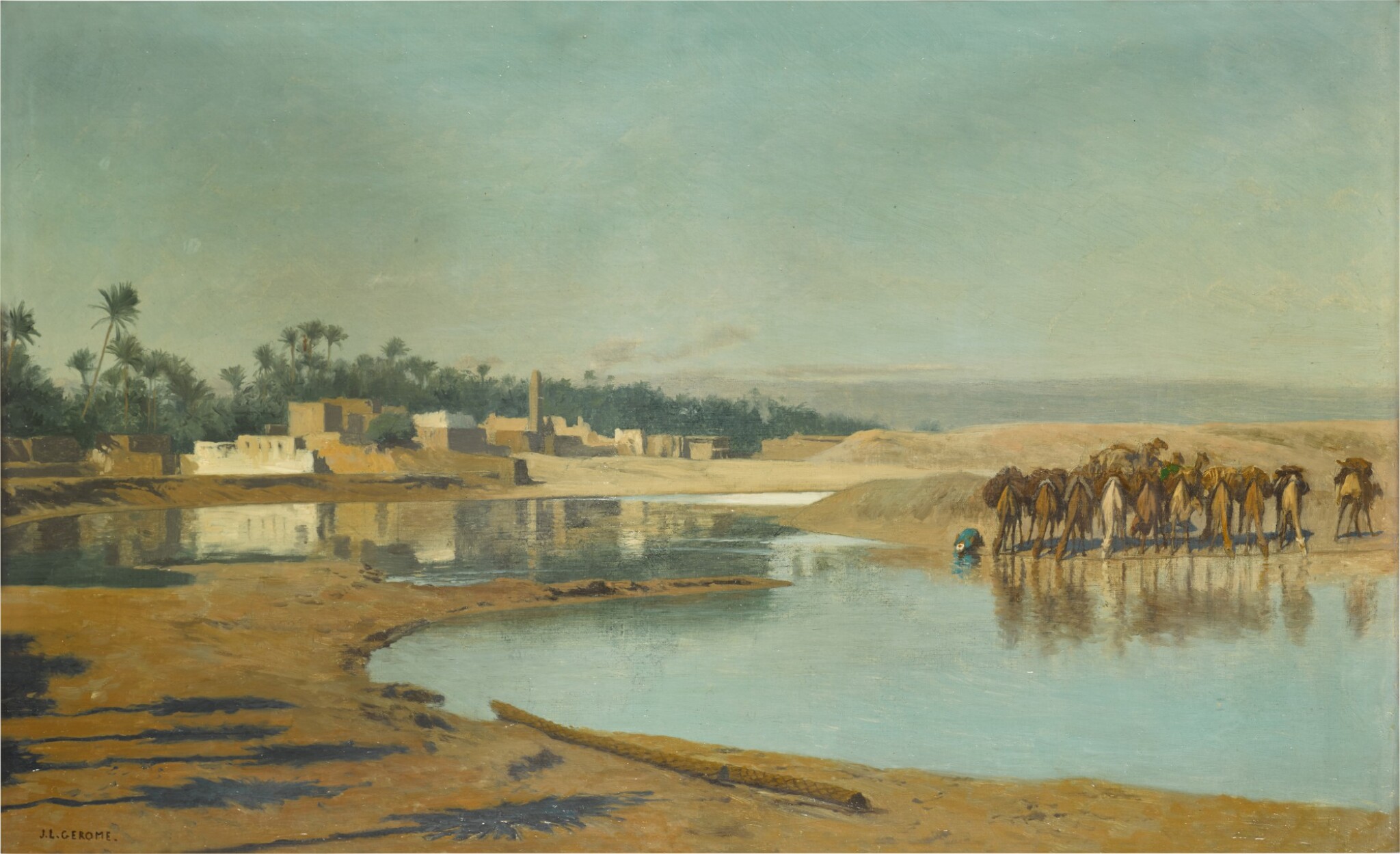 The canvas has not been lined and is providing a stable support to the paint surface. There is some surface dirt and some minor rubbing along the lower edge. There is some minor craquelure visible to the sky upon close inspection. The work is in good overall condition, ready to hang. Examination under ultra-violet light reveals no evidence of retouching or restoration. There is an opaque layer of varnish.

John Beard Jackson, Pittsburgh (1845-1908, 'one of the best known men of Pittsburgh', served in many roles including: President of the Fidelity Title and Trust Company, former President of the Pittsburgh Chamber of Commerce and the State Bankers' Association. He dedicated his life to making Pittsburgh greater through his service and philanthropy); thence by descent to the present owner
This newly discovered, evocative work, painted after 1883, captures the calm of evening in a village on the Nile, likely on the outskirts of Cairo. The scene appears to be set either in July or August, when the river rises, or in October or November, when it begins to recede, judging by the flood level on the Nile plain. With great mastery and a director's eye for narrative, Gérôme evokes the utter stillness and loneliness of the desert air. As the harsh heat of the day has subsided, and the cool evening sets in, a troop of camels and their driver, their hard day’s work done, drink from the pooled water.

Gérôme first travelled into the Egyptian desert in 1856, together with the sculptor and photographer Frederic Auguste Bartholdi as well as fellow painters Léon Charles Bailly and Narcisse Berchère. He returned in 1868 with his brother-in-law Albert Goupil, pupil Paul Lenoir, painters Willem de Farmas Testas and Léon Bonnat, and the writer Edmond About. Their expedition took them along the Nile and into the Sinai desert, offering privileged insights into the harsh world so masterfully captured in the present work.

The painting was no doubt inspired by photographs made by Bartholdi and later by Goupil on the expeditions Gérôme made with them. Both the panoramic backdrop and the precise style in which it is executed make the present work a fascinating example of the link between photography and Gérôme’s own painterly vision, which was based on precise draftsmanship and clear composition. The aesthetics of photography, a process that produced a unique image on metal, had many similarities to academic painting, and Gérôme used the new invention as justification for his obsessive drive for verisimilitude. 'Photography is a vocabulary that can guide artists in their translation of nature, an album in which they can find fresh ideas and new inspiration,' wrote the photographer Antoine Claudet.

Yet Gérôme skilfully played on his reputation for accuracy. While his travels to Egypt and his use of photography lent his Orientalist visions the impact of eyewitness statements, Camels Watering in the Desert bore the seal of the artist's nostalgic imagination, perpetuating the notion of the North African desert as an immutable, timeless place at a point when Egypt was, in fact, a fast-changing country undergoing modernisation from the top down. From 1850, French ships sailed from Marseille to Alexandria via Malta in seven days. From the 1870s, journeys became faster, and soon Alexandria had a rail connection to Cairo. In 1869, Gérôme had been sent to Egypt as part of the French delegation for the inauguration of the Suez Canal, which transformed Egypt into an international shipping thoroughfare. As Linda Nochlin observed, Gérôme’s paintings underlined 'a strategy of realist mystification', at a time when the Orient was fast becoming more accessible. She writes: 'Time stands still in Gérôme’s painting... [He] suggests that this Oriental world is a world without change.'