T his Autumn Sotheby’s are delighted to offer a treasure trove of silver and gold boxes, porcelain, pottery and glass from across the UK and Europe from the 16th to the 20th centuries. Whether you are buying objects to use regularly such as silver flatware or a porcelain dinner service, or collecting precious objects to admire with wonder, the Style sale in London this November is filled with an exciting range of objects with estimates under £300 to £50,000. 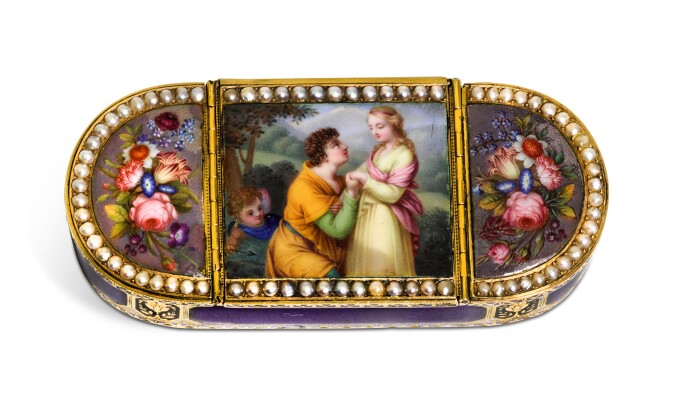 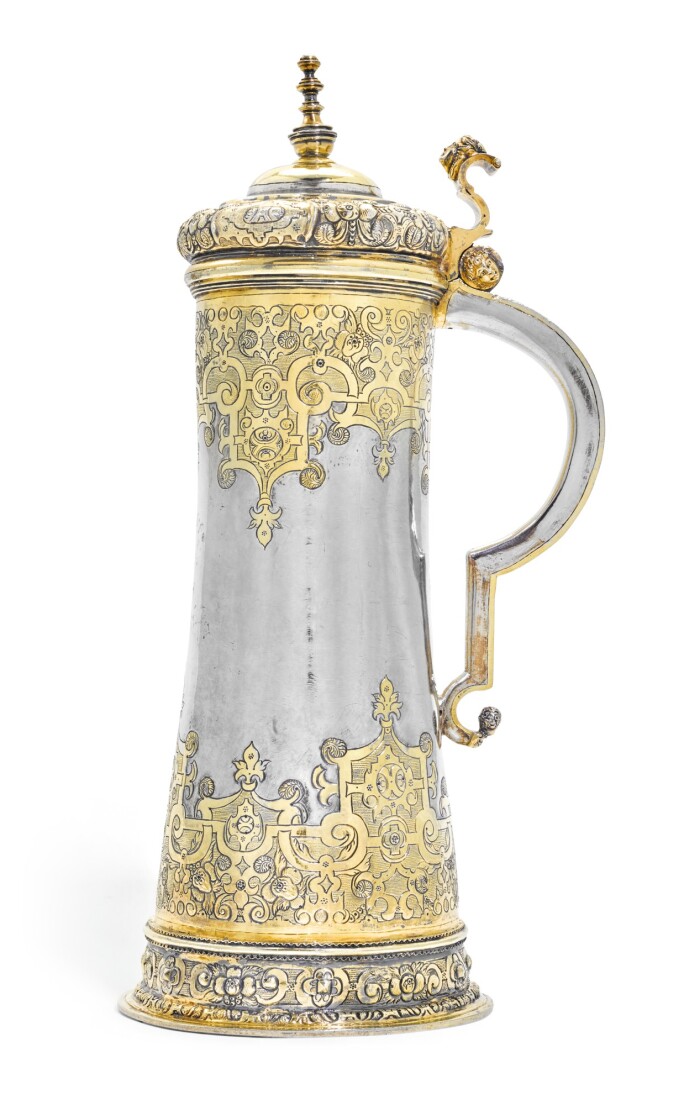 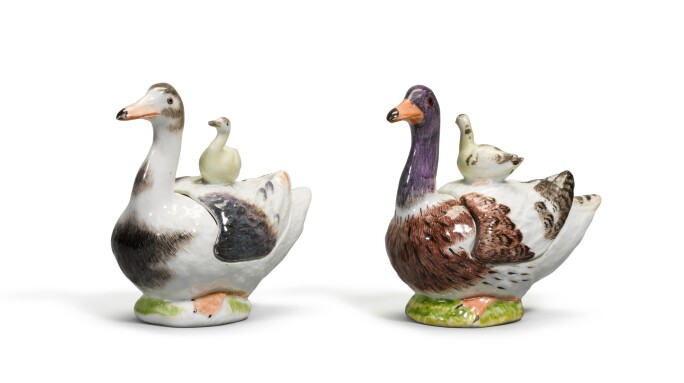 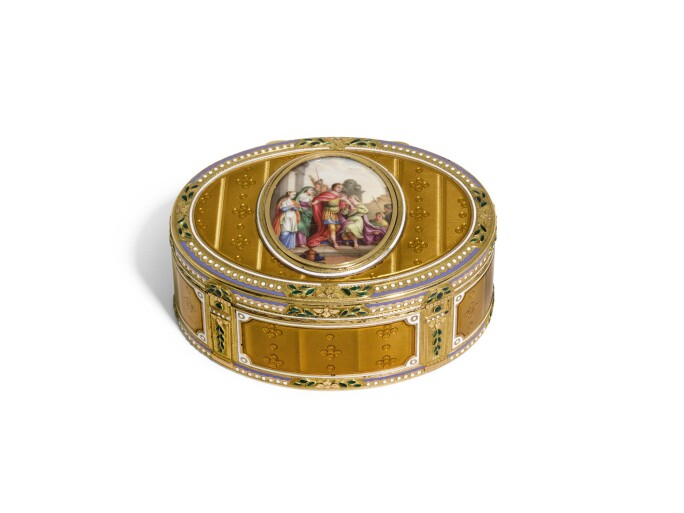 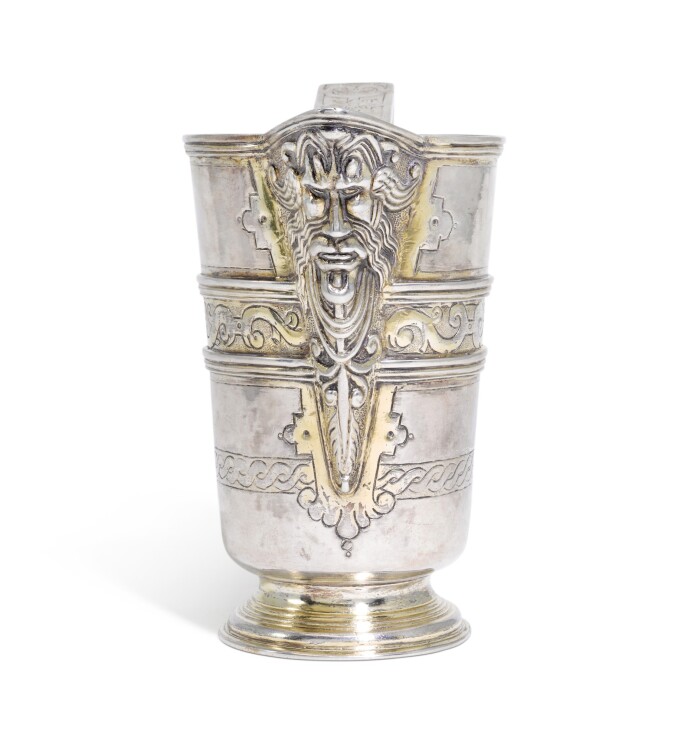 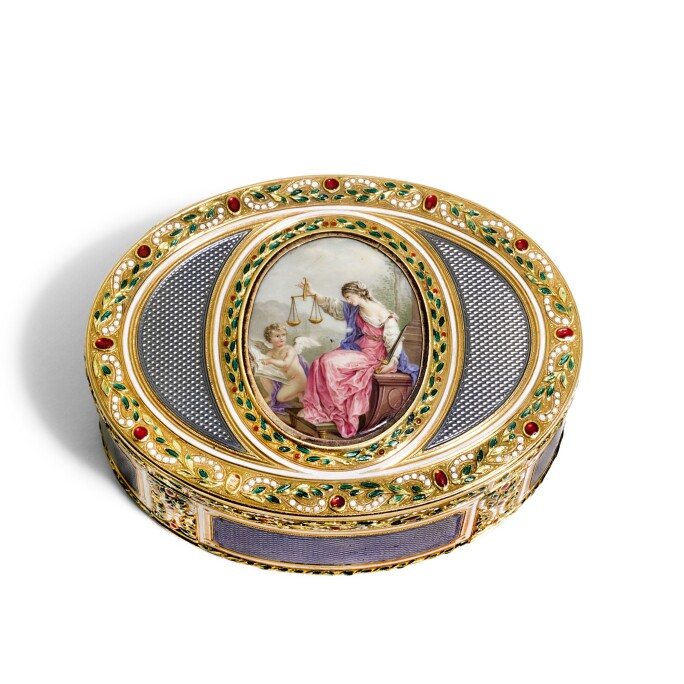 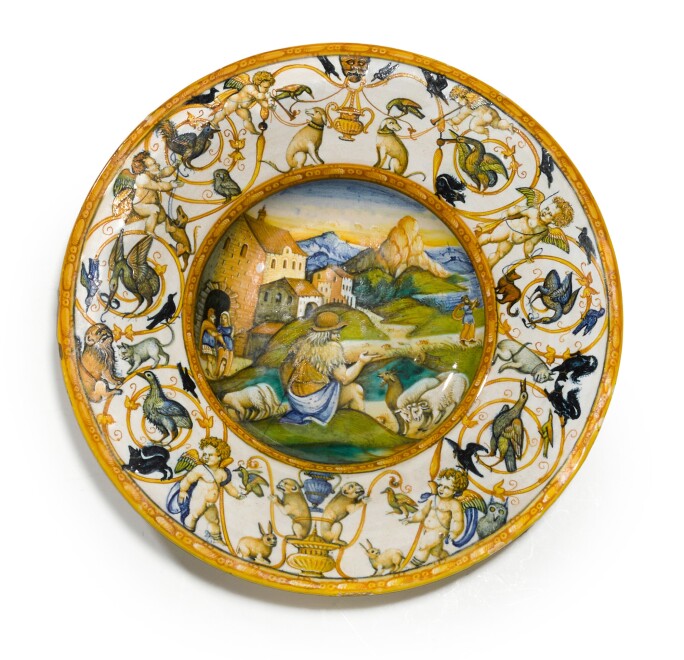 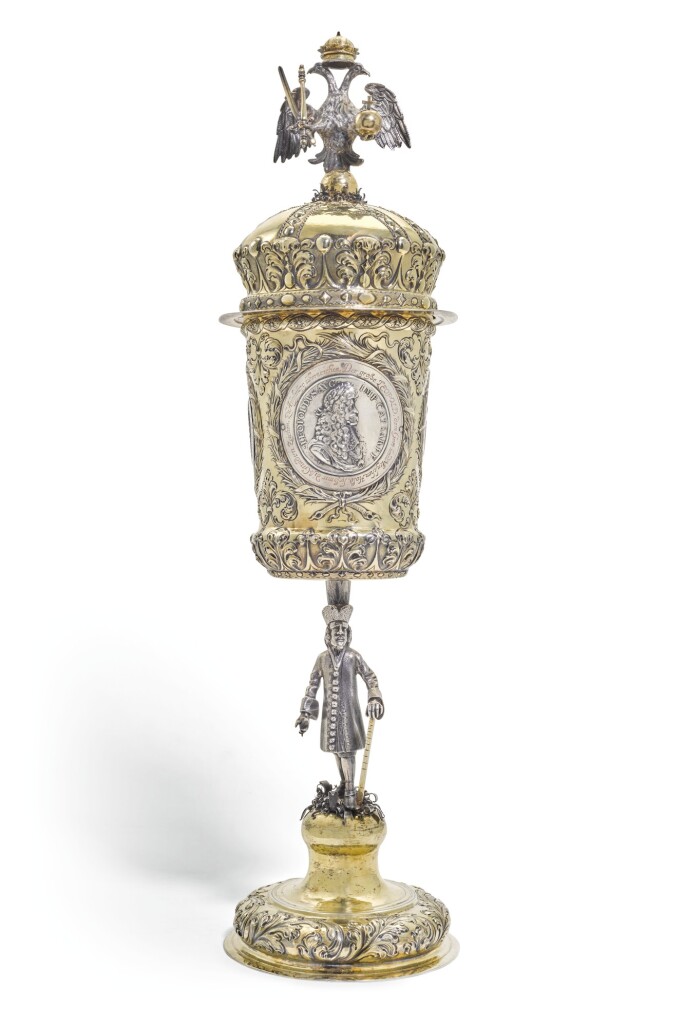 The exquisite Private European Collection (lots 1-95) described and illustrated in this sale represent the favourite objects from a collection formed many years ago. Browsing through the lots, it is not difficult to imagine how esteemed each piece was, carefully chosen and set aside for an exclusive Kunstkammer, the delight of its owner and a few of his closest friends.

It all began with a Viennese Hofjuwelier, favoured by his aristocratic customers in the Austro-Hungarian Empire in the 19th century. Inspired by the jewellery and other works which passed though his hands, he began a collection of his own. His son and granddaughter, known in both London and Vienna, continued the tradition, so much so that they became familiar with a number of their patrons' private museums, sequestered in castles and mansions which were rarely if ever open to the public. As a youth, the granddaughter's son, who had joined the business, was allowed access to these Kunstkammern, a privilege not lightly taken. Soon after the end of the Second World War he visited an uncle in London, where his enthusiasm for works of art was further fuelled by visits to museums and auction rooms.

Already by then the possessor of a choice art collection, he decided to move his best pieces to London, where he installed them in an apartment in Holland Park Gardens. He had long dreamt of forming a noteworthy group of wonderful pieces for himself, to be admired and enjoyed in the privacy of his own study. This he achieved with remarkable success.

We can easily understand the collector's fascination for his three chief passions: 16th and 17th century silver and silver-gilt from central Europe, including (lot 1) the mounted burl drinking cup, worthy of any traditional Kunstkammer of old: beautiful products of the snuff box maker's art in gold, hardstone and enamel (Lot 49); and examples of delicately-painted porcelain, many from Meissen, in whose vignettes and arabesques, flowers and gilded cartouches one could lose oneself in a reverie (Lot 67). Surrounded by these, his most precious and well-loved objects, the collector was able to find so much to admire as well as being able to look back with great pleasure on a lifetime of singular achievement.

The compelling appearance combined with its role as a 'storer of value' made silver an ideal material in which to craft luxury goods. The fashion for silver tableware emerged together with the taste for fine dining and became popular among European elite.

The silver highlights of this sale comprise a very fine assortment of silver objects from the collection of a distinguished private collector. Amassed over many years, they are primarily European, dating from the 16th to the 18th century. The collector’s taste for fine ancient German silver is exemplified by the inclusion of a beautiful German silver-gilt mounted wood burl drinking cup, possibly from Augsburg, dating from mid-16th century (Lot 1) and an impressive Imperial Presentation German parcel-gilt silver cup (Lot 21) and cover which was presented to Lechmeister Georg Grossen, by the Roman Emperor at the time of the Imperial diet held in Augsburg in early 1690. 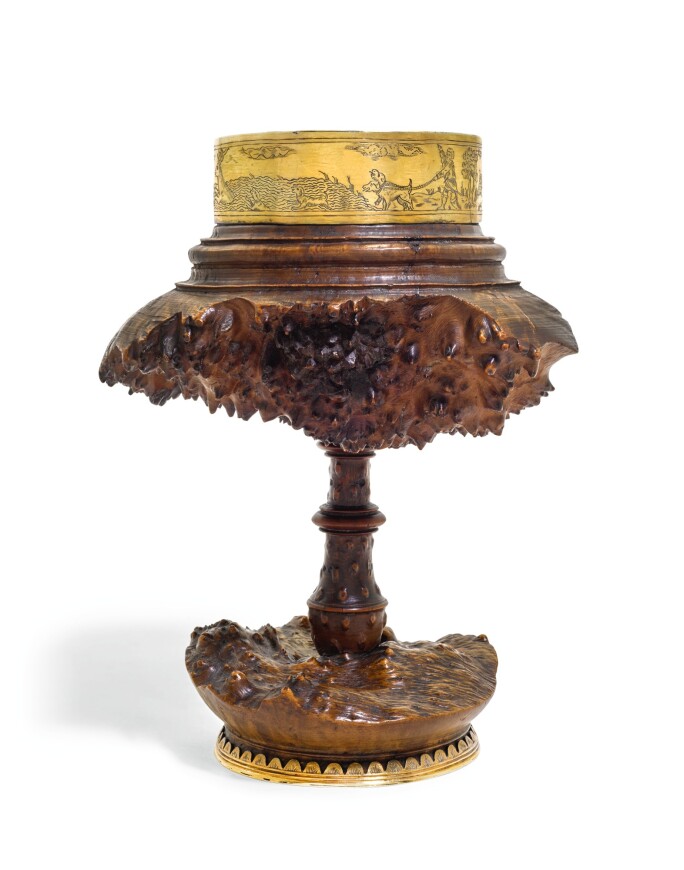 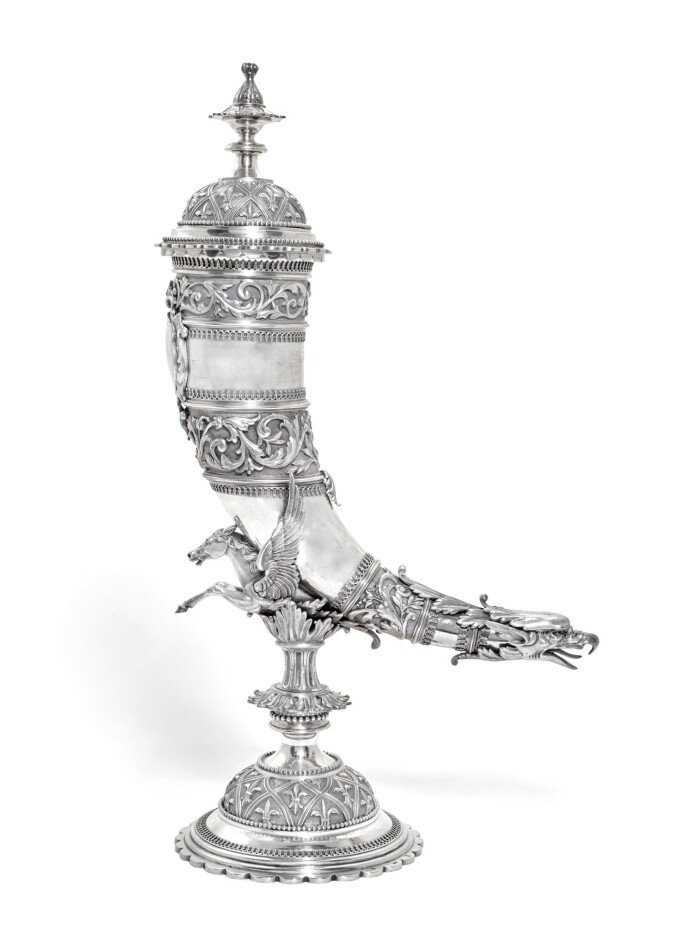 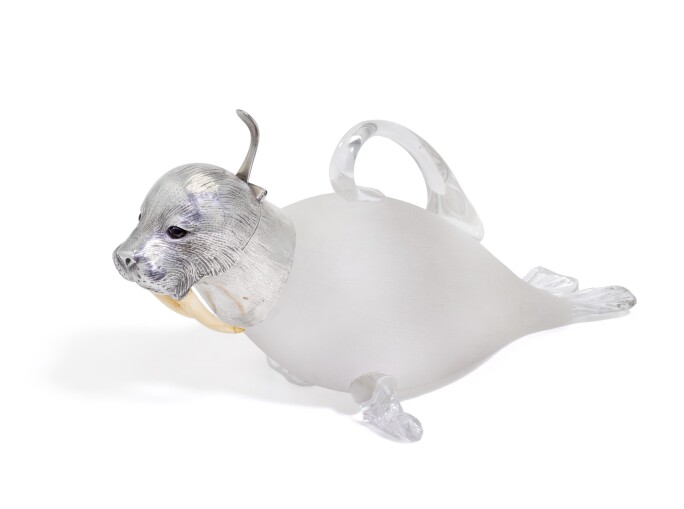 The Age of Vertu

The sale includes a very fine assortment of objects of vertu, including gold and enamel snuff boxes, fans and an impressive jewelled silver-gilt, lapis lazuli and enamel model of an ostrich (lot 150) .

Created from precious materials either to be admired simply as works of art or, more often, originally conceived for a practical purpose, objects of vertu encapsulate a vast wealth of history, imagination and artistic skill within a very small area. The snuffboxes in this sale illustrate the skills of European bijoutiers from the 18th to the 20th century, such as a charming early gold-mounted lapis lazuli snuff box, possibly Italian, circa 1735 (lot 45).

About four decades later, gold-mounted enamel boxes were at the height of fashion Paris. Also featured in this sale as part of a small group of high-quality gold boxes, is an example for which the bijoutier Charles-Alexandre Bouillerot was inspired by the naturally occurring patterns of hardstones, which he transformed into a dendritic enamel surface of plum and pale pink colour (lot 152). Meanwhile, the work of the revered and prolific Parisian goldsmith Jean-Etienne Blerzy is represented by a slightly more classical gold box with a lavish dark blue and gold ground (lot 153), and a gold box inset with a scene of a splendorous ball scene by Arthur Goossens (lot 155) demonstrates how sought-after boites-a-miniatures were in the 19th century. 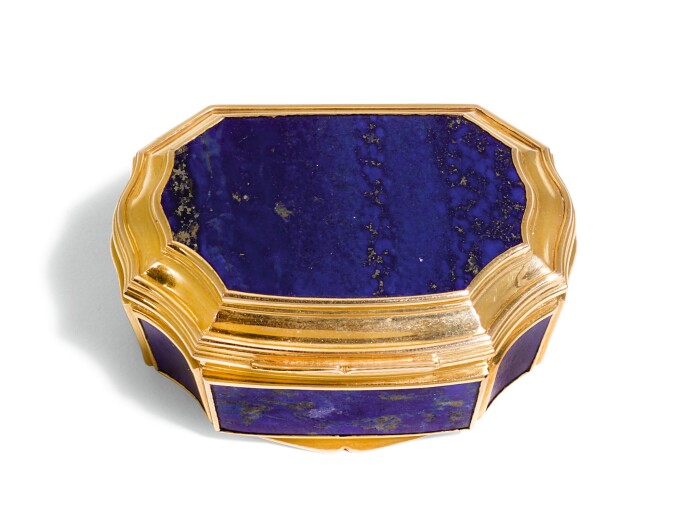 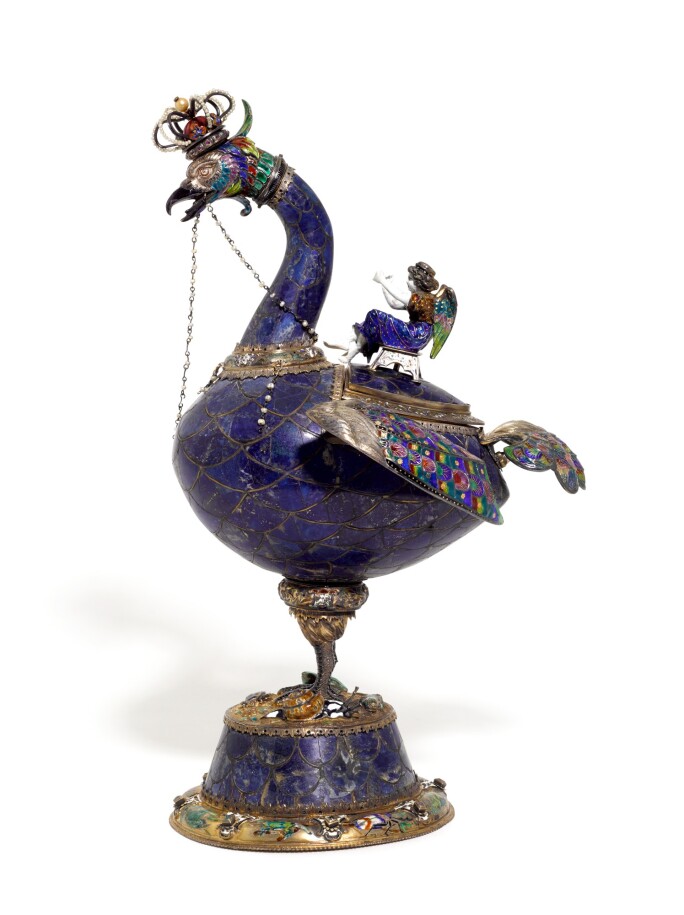 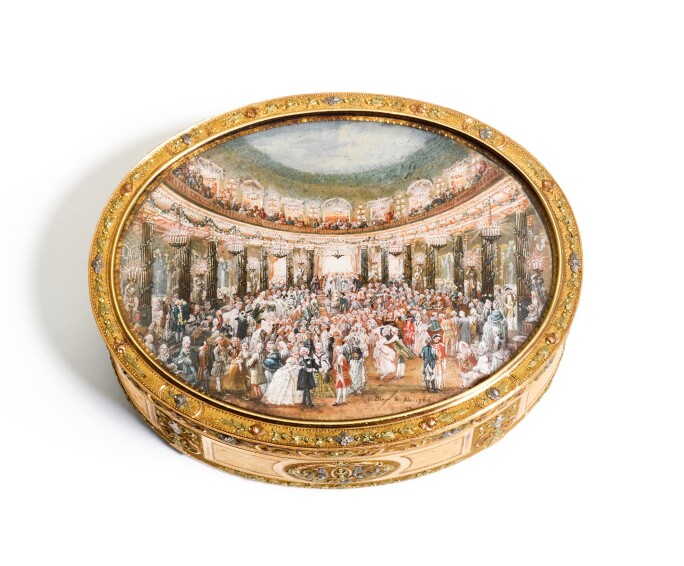 A various choice of porcelain is offered in our sale, representing the finest and most delicate work, with 18th century Meissen porcelain (lot 54-65) and Vienna porcelain (lot 69 -81) both picturing fanciful chinoiserie scenes. The sale also presents a very rare and important collection of German engraved glass, such as a Silesian engraved armorial goblet and cover, from the first quarter of the 18th century.

Porcelain highlights of our sale also comprise very nice plates and part-service from the Royal Copenhagen factory decorated with specimen sprigs of flowers or fruits (lot 228-231). 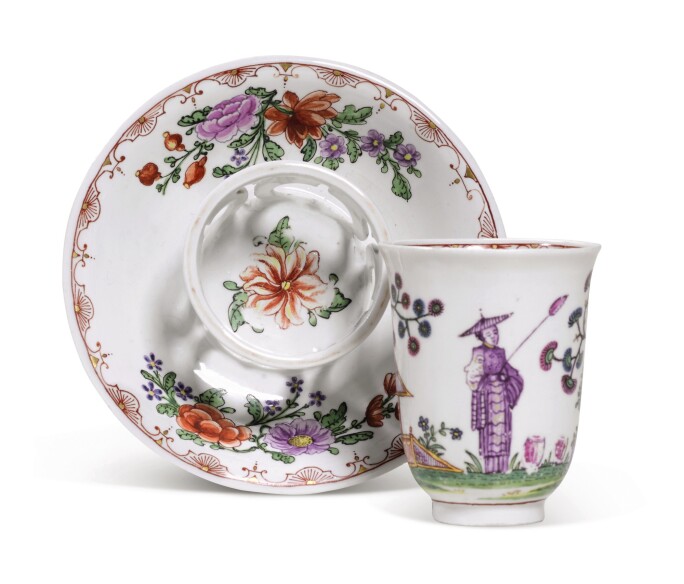 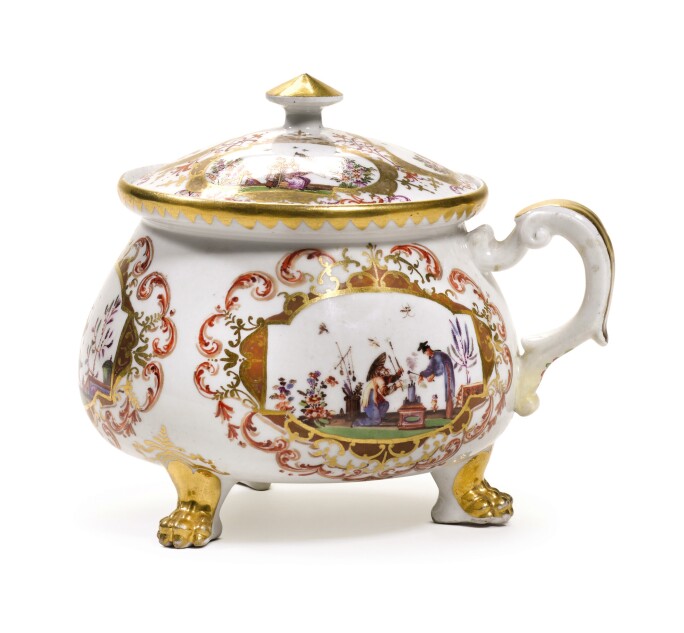 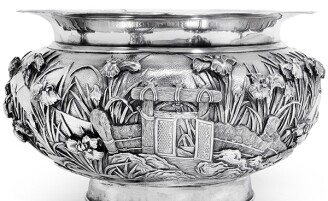