S otheby’s is proud to present for sale the contents of “A Mayfair pied-à-terre”, an interior which encapsulates the inimitable eye of the award-winning designer Alidad. This residence, in the heart of London, showcased part of the collection of a European gentleman of exquisite taste and served as an inspiring and comfortable haven for him to return to after his international travels. European Paintings, Drawings and Sculpture in the Italianate manner are presented together with elegant furniture and decorative works of art, which underline both the collector’s heritage and the inspiring talent of Alidad. 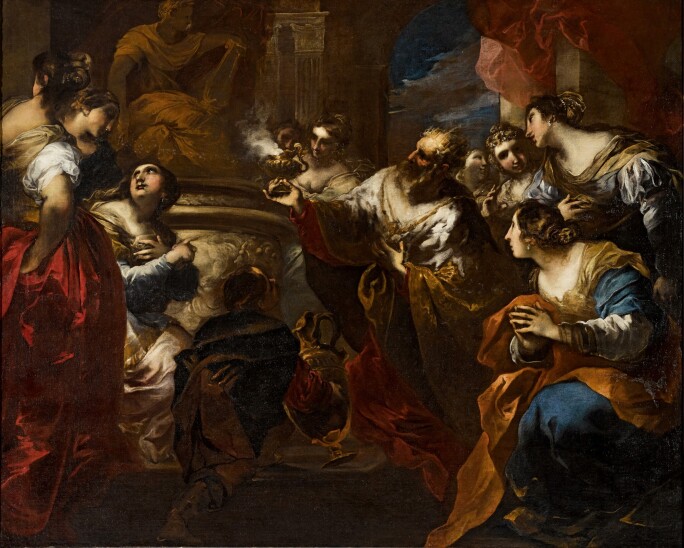 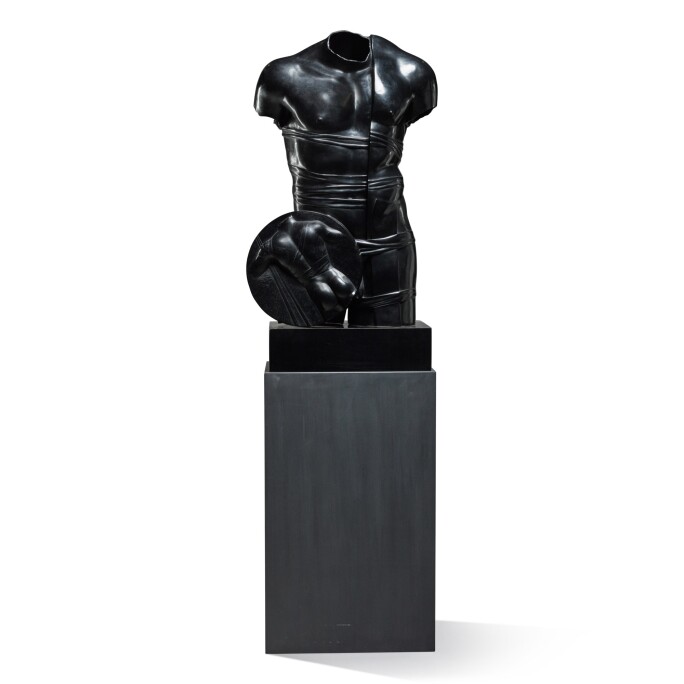 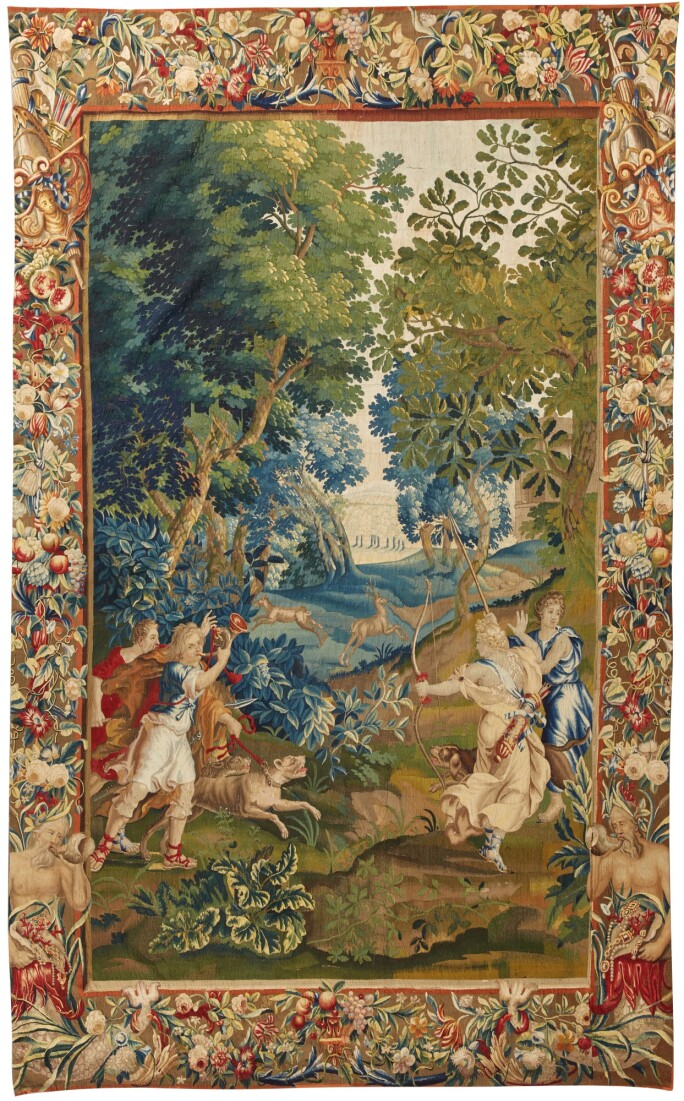 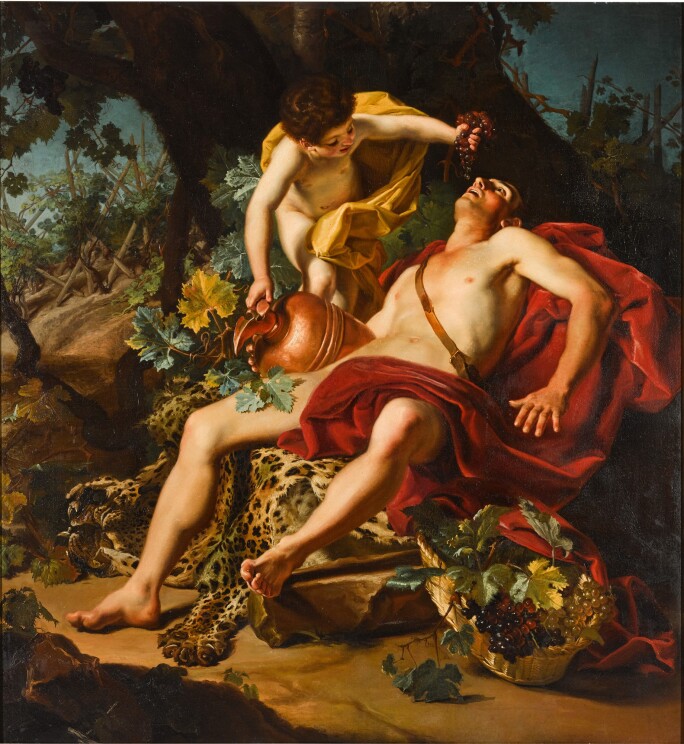 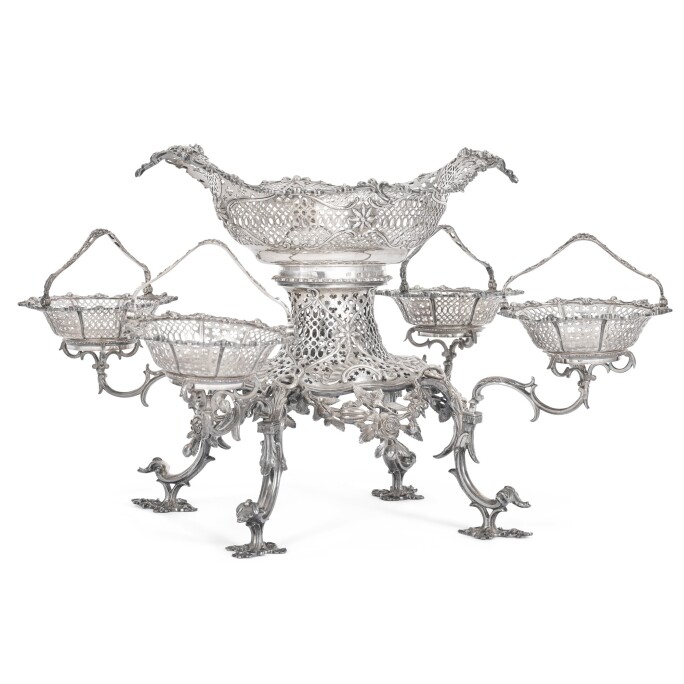 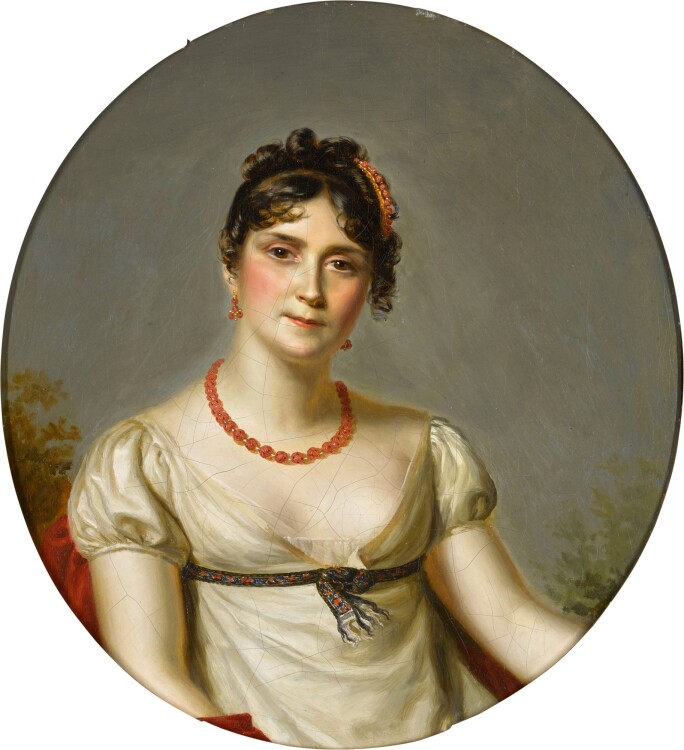 Alidad Selects His Personal Highlights From the Collection 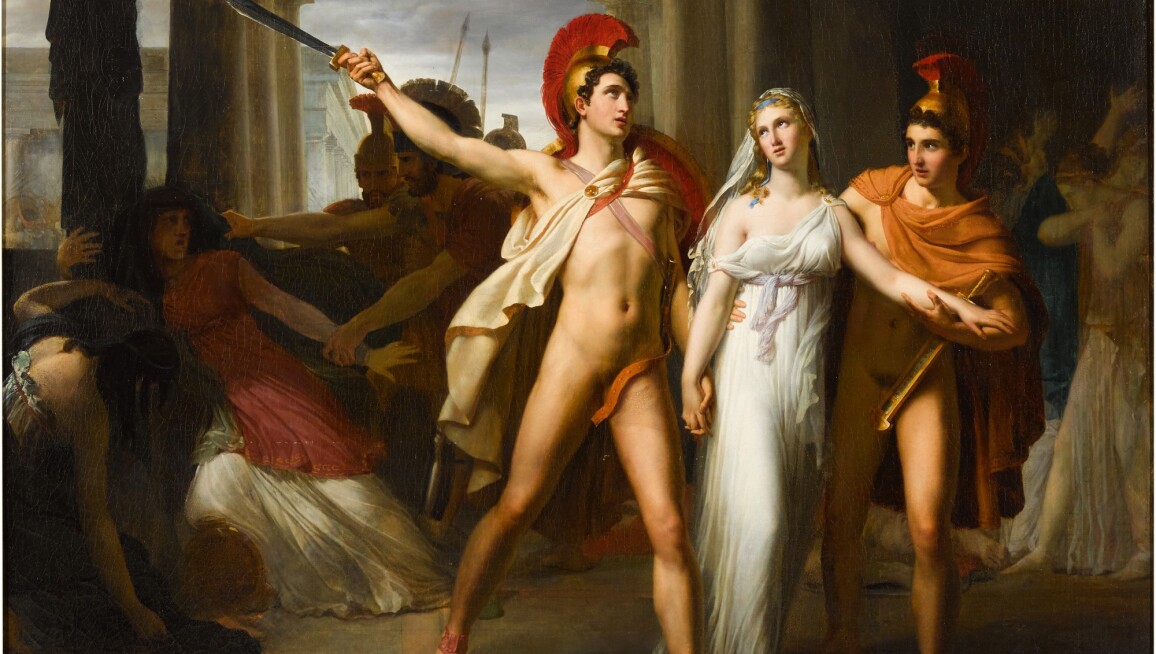 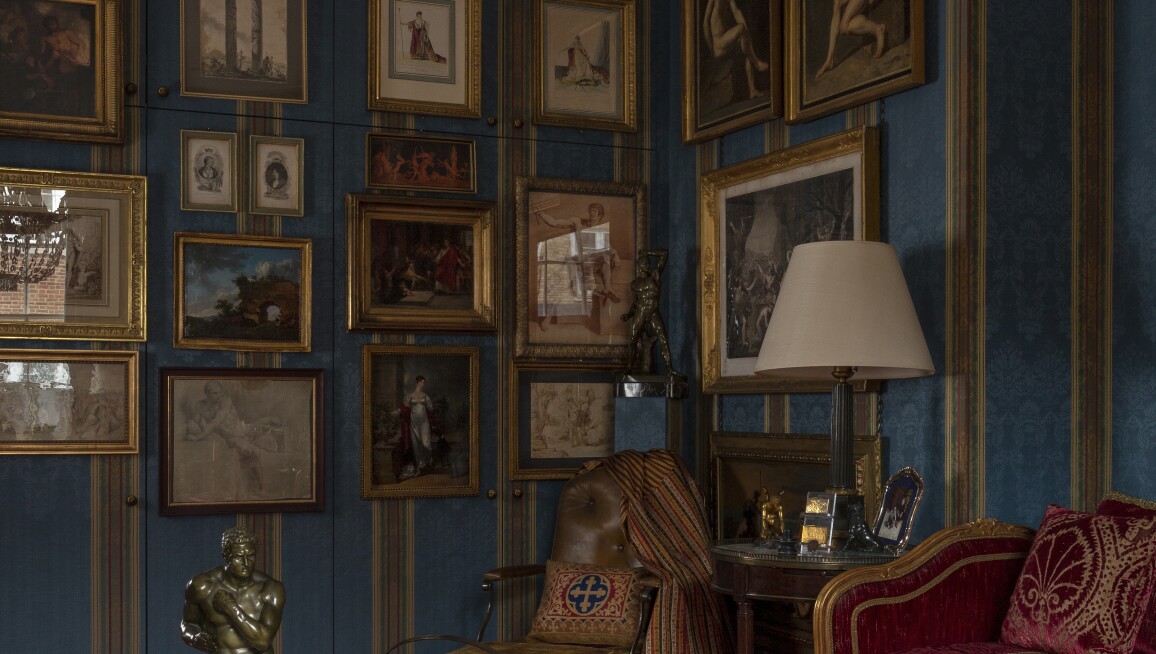 ‘The idea of beauty is ambiguous, a double-edged sword that can easily hurt you, causing pain and torture. My art is an example of this dichotomy: mesmerising perfection attached to corrupted imperfection.’ (Igor Mitoraj cited in: Christopher Masters, ‘Igor Mitoraj Obituary’, The Guardian, 17 October 2014, online.) Igor Mitoraj’s oeuvre is rooted deeply in the classical tradition, greatly influenced by ancient Greek and Roman art and fused with a postmodern malaise.

Typical of Mitoraj’s practice, Untitled, 2001 exudes with fragmented energy and classical beauty. Comprised of a disembodied head and limbless torso, the work is made all the more striking through it’s slick black surface. The torso appears wrapped with bandages constricting the figure, a large medallion moulded from the same dark bronze is fixed on to the sculpture and depicts a second classical male figure, his arms spread wide, almost touching the frame of the panel. The sculpture draws heavily on Roman and Greek heritage and highlights Mitoraj’s absorption with the dialectic between perfection and imperfection.

Mitoraj mobilises the tradition of the sculptural nude to probe the nature of the human body, its beauty and fragility as well as its suffering. The thematic rupturing presented through deliberately truncated limbs underlines this paradox of the human condition. ‘I feel that a piece of arm or a leg speak far more strongly than a whole body’ (ibid).

Originally created in 1663, the Prix de Rome was a prestigious art competition which was taken over in the 19th century by the École des Beaux-Arts in Paris. During this period, the École was considered the most important Fine Art teaching institution - being a student there and participating in the Prix de Rome was regarded as the first step in pursuing a professional and successful artistic career. The participants were all around 25 years old, and the competition, which required a long preparation, was the highlight and final step of their academic path. There were originally two categories to complete in: painting and sculpture. Architecture, music and engraving were added as categories later. 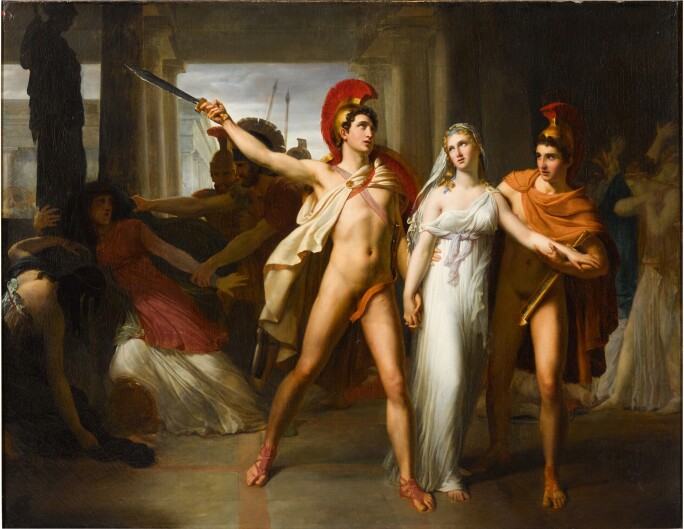 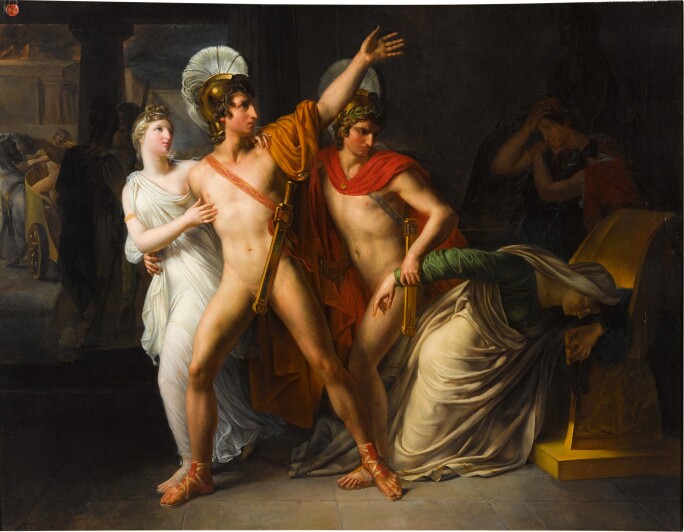 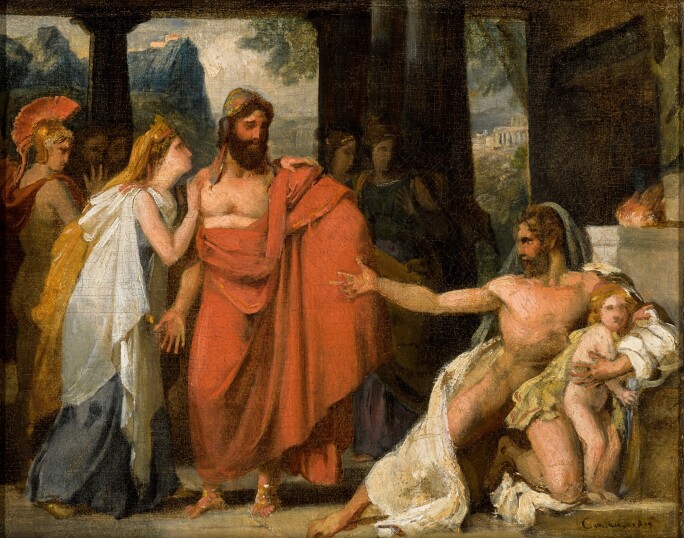 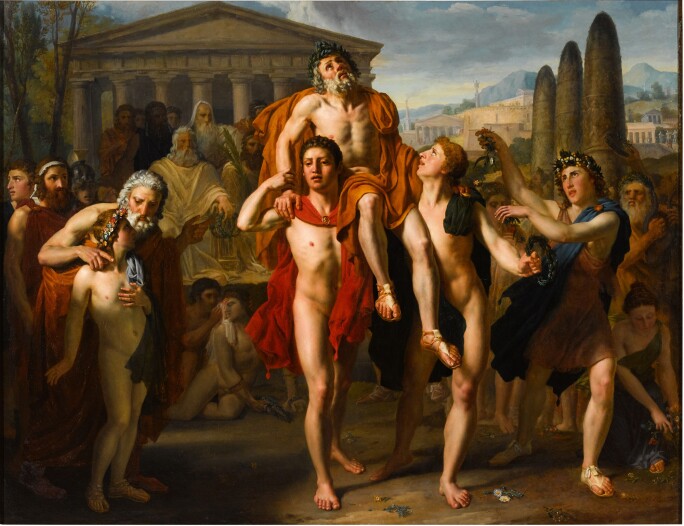 This sale includes three paintings and one preparatory sketch for the third and final part of the Prix in the history genre painting category. Only the very best candidates (10 each year) made it to this stage. The judges of the third task assigned one historical or mythological subject for all participants. The contenders had 12 hours to sketch the composition without being allowed to leave the École or communicate with anyone. Following this, they were allowed 62 days to complete the painting, using a standard format canvas. As the competitors had often studied closely together, the final works often shared close similarities in draughtsmanship and composition. The paintings and sketches were displayed in public before the final decision was taken.

The creator of two of the works in this sale, Amable Paul Coutan (1792–1837), won the prize in 1820: a sign of great talent, perseverance, and dedication. The winner in each category was awarded a much sought after 5-year scholarship in the Académie de France in Rome, granting the artist the opportunity to study first-hand the Classical and Renaissance masterpieces in the Eternal City.

The most significant professional art societies in Europe in the 18th and 19th centuries were the Royal Academies of Art in France and England, established in 1648 and 1768 respectively, and later the Académie des Beaux-Arts, Paris, created in 1816. They ran schools of instruction, held annual or semi-annual exhibitions, and provided venues where artists could display their work and cultivate critical notice. Such institutions had a virtual monopoly on public taste and official patronage. They promoted an ‘intellectual’ style of art whose standard was ancient classical art, the European tradition, and historical subjects. 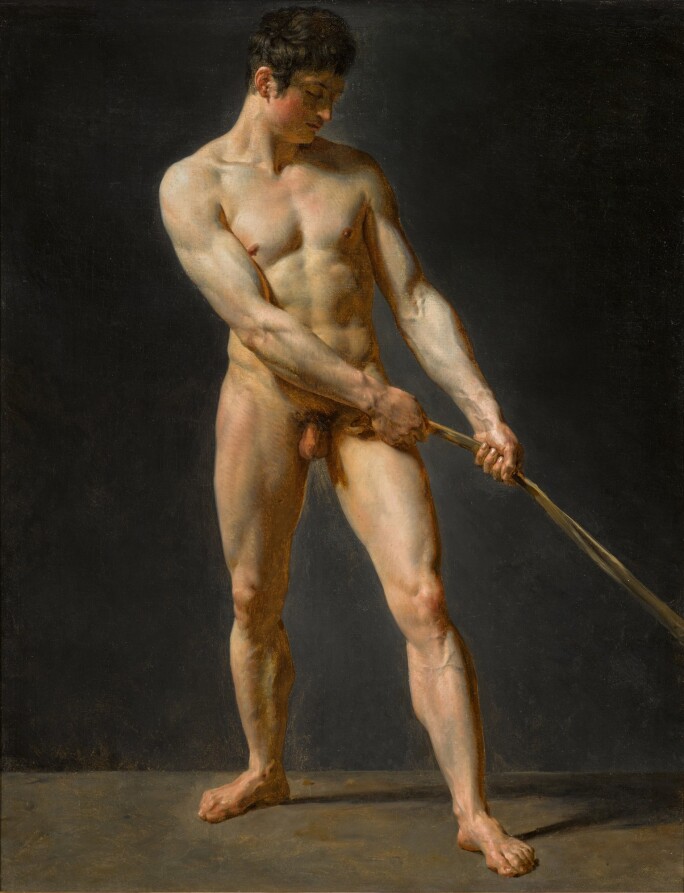 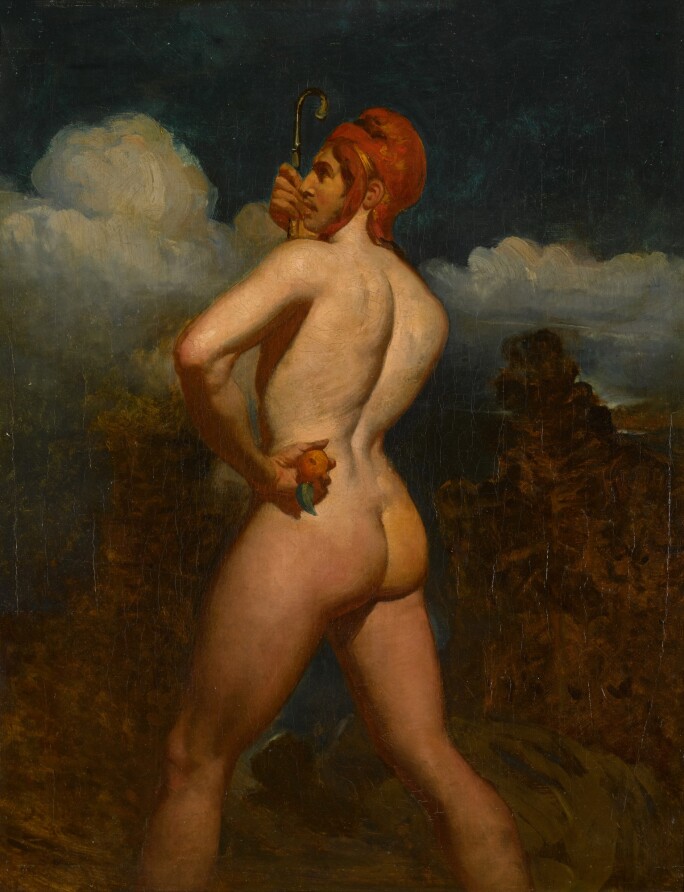 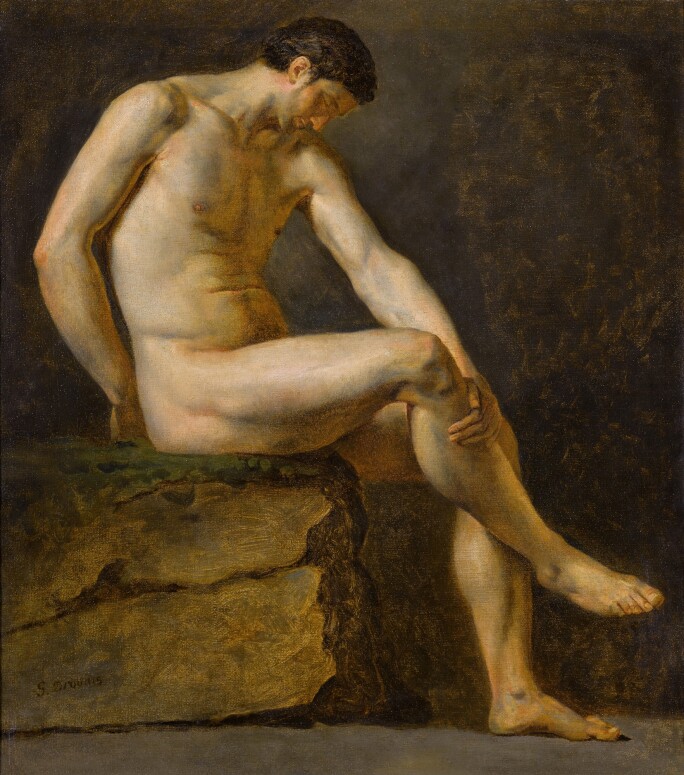 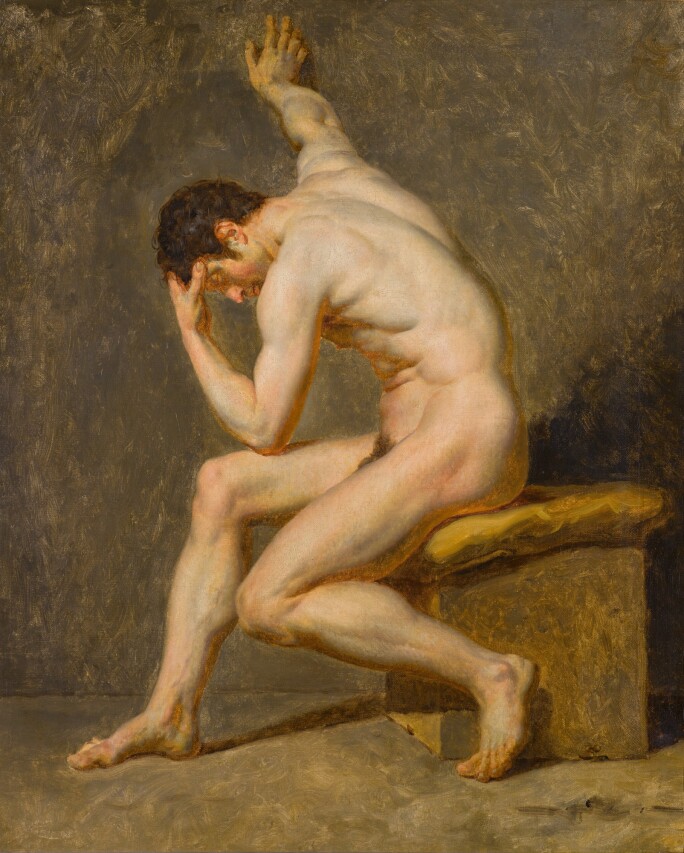 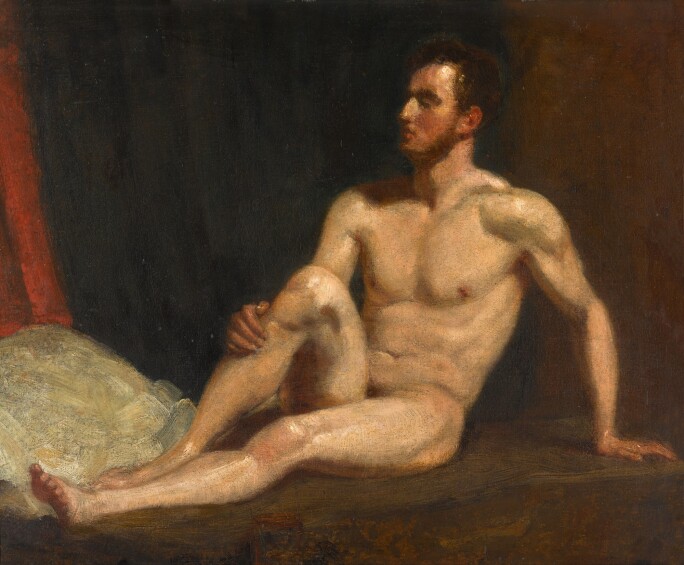 The Academies regarded the male human form as the very foundation of painting and sculpture; it had to be mastered by any aspiring artist. No female artists were admitted to the Academies and for reasons of ideology and propriety the models were generally male. Traditional academic instruction placed a student’s ability to draw at the forefront of its approach. It was only when a student had demonstrated that they were sufficiently skilled in academic drawing that they would be permitted to pick up a brush. Bodies were depicted standing, sitting, kneeling, curling up or stretching, in movement or at rest. They are shown from front and back, in three-quarter profile and from high and low angles. And, while all these studies reflect the same essential study of the nude model – his anatomy, musculature and as a three dimensional form – the choice of position adopted reflect particular concerns, such as the sense of movement in a figure, muscle tension and balanced proportions, powerful musculature or the technique of foreshortening and perspective.

This sale features a wonderful array of male nudes from different studios, in varied styles and poses, all representative of the artistic training received in the Academies – institutions which reached their height of influence in the 18th and 19th centuries. 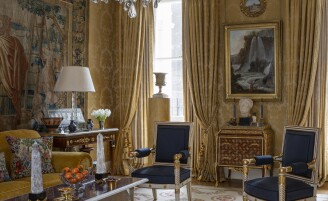