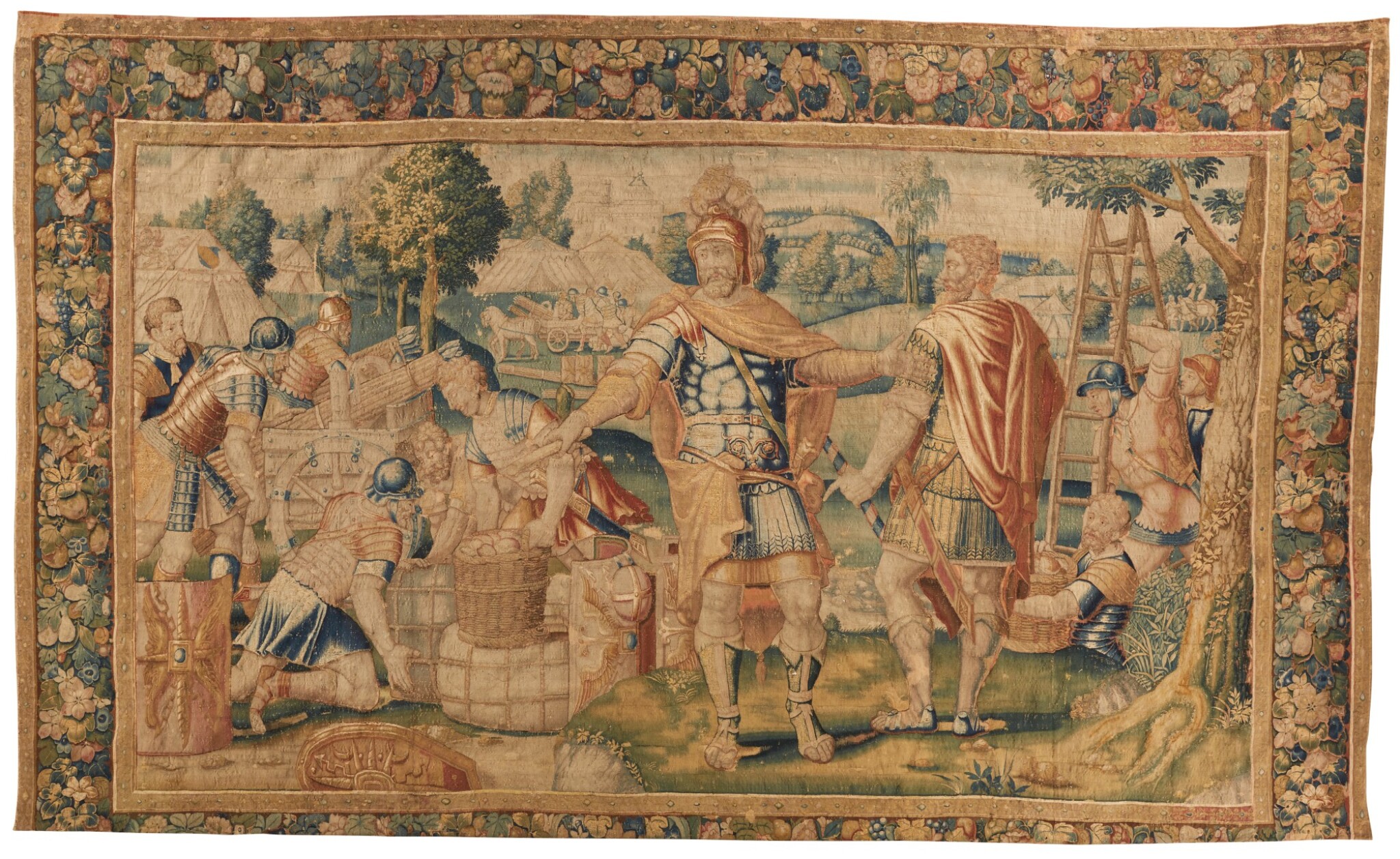 woven with a Roman encampment in a landscape river setting, the soldiers carrying wooden chests and baskets of food, the foreground with standing armoured figures in the foreground carrying batons, within a four-sided exuberant fruiting and foliate border, with further inner and outer narrow borders with now indistinct geometric motif design

In good overall professionally restored condition. Good colour and compositional balance. Very decorative border. The bottom border has been slightly folded (and sown) - this can easily be undone. Striking tapestry.

Please note the dimensions of this tapestry are approximatively 336cm high, 506cm wide.

The quality of weave and compositional detailing and border type are typical of Oudenaarde weavings of the second half of the 16th century. For an Oudenaarde weaving, circa 1550-1560, which could depict the biblical subject of Elijah and the women of Shunem (II Kings), with camels and caskets ready for departure and within the fruiting border type and the same fineness of weaving detail, with the weaver’s mark (Vienna, Kunsthistorisches Museum, Kunstkammer, Inv. T LXXXVII3), see Ingrid de Meuter and Martine Vanwelden, Tapisseries d’Audenarde du XVIe au XVIIIe siecle, 1999, p.161. For comparable quality classical compositions, albeit in elaborated border types, see weaving from The Story of Alexander, Oudenaarde, circa 1880-1600, with small figures and animals in the background of detailed landscapes, and groups of Roman soldiers in the foreground, see Ingrid de Meuter and Martine Vanwelden, op.cit, pp.170-176.

For further discussion on Oudenaarde weavings of Biblical, mythological and classical subjects, some within the same distinctive exuberant fruiting border, see ibid, pp.147-176. Considering the attire of the figures depicted in the present composition it is probably from a Classical series rather than being a Biblical reference.

For discussion of Oudenaarde tapestries, which depict a variety of biblical and classical subjects, and were originally woven with town marks in the selvedges, post 1545, known for the predominance of green, blue and brown in their colour range and with a high reputation for their depiction of distinctive ‘green work’ including the border types, see Guy Delmarcel, Flemish Tapestries, 1999, pp.188-194.