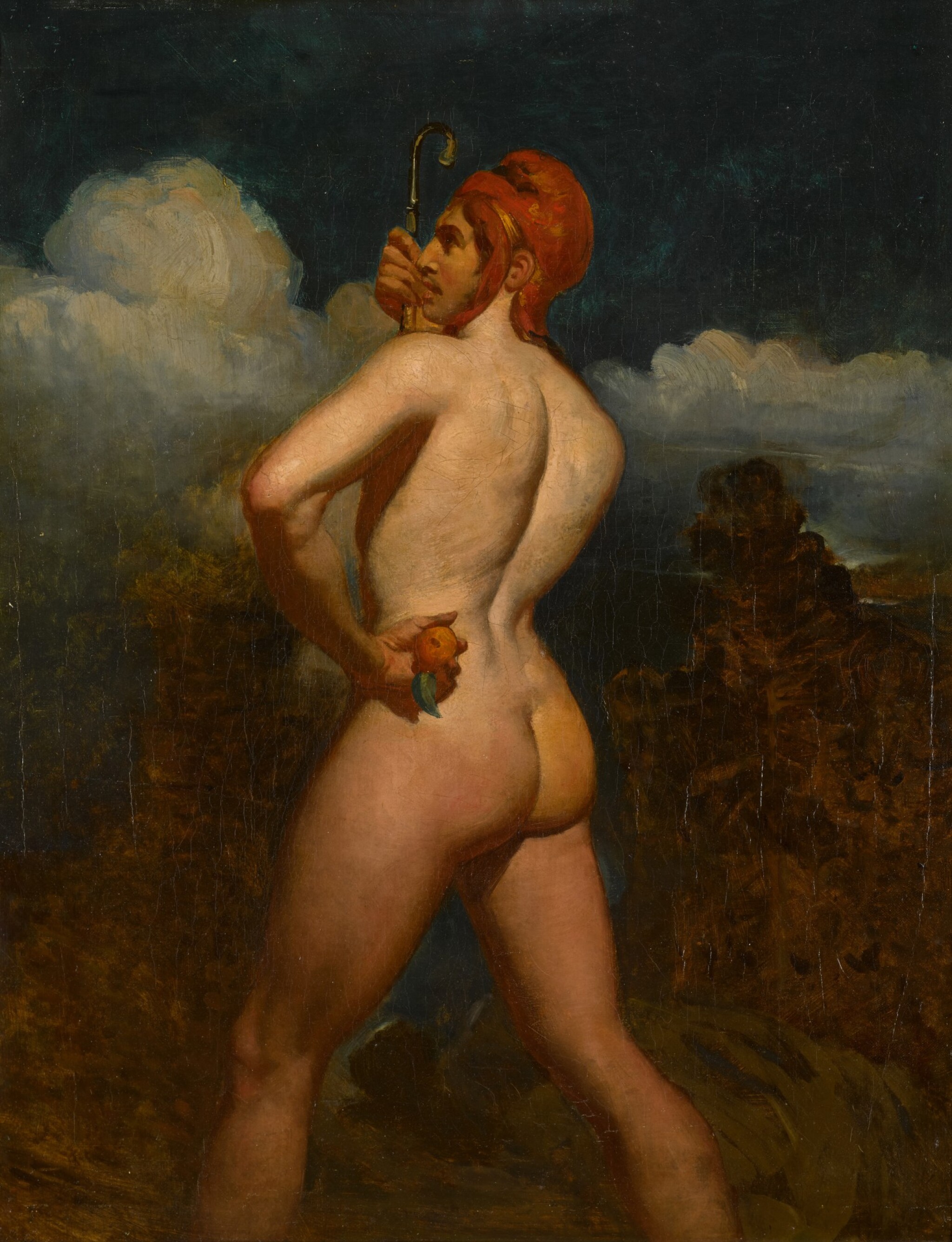 inscribed on the reverse: STUDY FOR / "YOUTH AT THE PROW" / Etty

The canvas is unlined, the paint surface is relatively clean, and the varnish is slightly discoloured, uneven and shiny. Inspection under ultraviolet light is impeded by the opaque and uneven varnish, but reveals some small, cosmetic retouchings in the background, and a couple of minor strengthenings around Paris' silhouette, between his legs, at the back of his helmet, and in his fingers holding the staff. The painting is in overall good condition.

This painting almost certainly originated as a life-room study of a nude male model, to which William Etty added an imaginary landscape setting and several significant details to create a readily saleable picture with a specific subject - Paris, the Trojan prince from Greek mythology. He is identified by the Phrygian cap, the apple in his left hand and the crook clasped by his right hand, all probably additions to what was painted in the life-room.

A ‘Study of Paris’ was included in Etty’s retrospective exhibition at the Society of Arts, London, in 1849 (no. 37) but this was a ‘Head’ according to the artist's biographer Alexander Gilchrist, who dated it to 1842.1 However, the present canvas can be associated with The Choice of Paris, which the artist showed at the Royal Academy in 1826 (no. 24) - this large, ambitious painting had been commissioned by the 4th Earl Darnley and is now in the Lady Lever Art Gallery, Port Sunlight.2 In the Port Sunlight painting, the Phrygian cap is yellow or gold, not red as in the present work. However, a red Phrygian cap is worn by the prominent male figure in Youth on the Prow and Pleasure at the Helm, which Etty exhibited at the Royal Academy in 1832 (no. 196) and which is today in the Tate collection.3 There is thus also a probable link between the present work and the Tate painting, as suggested by the inscriptions on the reverse of the former, even if it is not a clear and obvious relationship between ‘study' and finished picture.

We are grateful to Dr. Richard Green for endorsing the attribution to Etty on the basis of digital images, and for dating the painting to between 1826 and 1832.