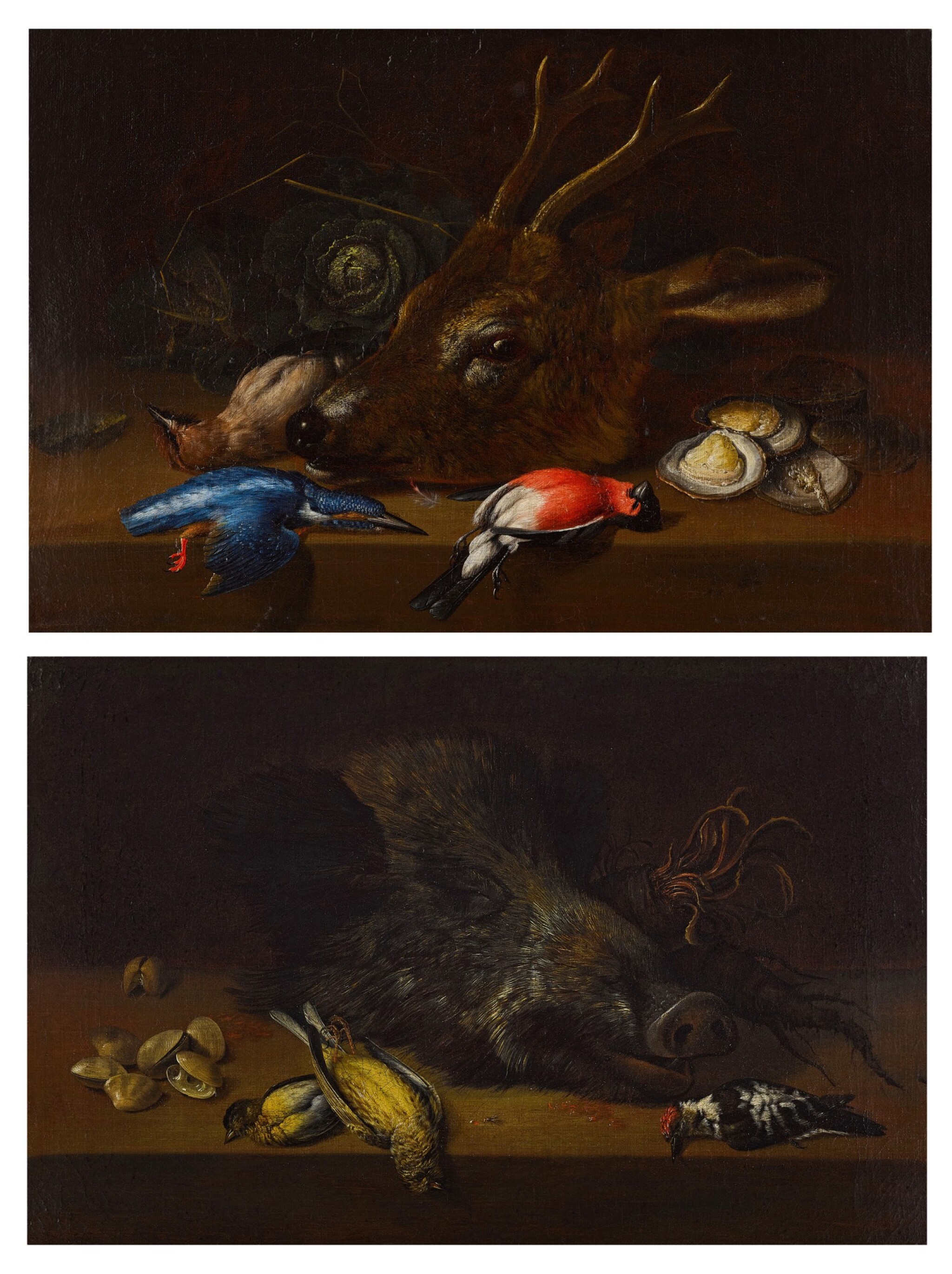 Still life with a boar's head, small birds and seashells

Still life with a stag's head, a kingfisher, a bullfinch and seashells;

a pair, both oil on canvas

Both canvases are taut on their stretchers. The stag canvas wax lined and the stretcher is bordered on its outer edges by a metal case that is not visible when framed. The boar canvas is lined to a modern support canvas. The overall images read strongly and clearly. Both paint surfaces are stable. Some of the red ground is faintly visible in areas that have slightly thinned with age, though this is not distracting. (Boar): The varnish fluoresces evenly under UV light. There are thin strokes of well-applied cosmetic inpainting visible, primarily to address craquelure and some thinness. More broadly applied retouches are visible in the background. (Stag): The varnish fluoresces somewhat unevenly under UV and more than one campaign of restoration is visible. There is an area of old restoration in the upper left background, as well as some scattered fine strokes of retouching, primarily to the craquelure, here and there. Some scattered spots of retouching concentrated near the edges. Some small spots of discoloration on lower edge. The paintings are ready to hang in their present condition. Offered in simple gilt frames.

This pair of hunting still-lifes are emblematic of the corpus of Johann Adalbert Angermeyer, one of the first, and most important, Bohemian specialists of the still-life genre. Active in the first third of the 18th Century in and around Prague, Angermeyer trained under the Swiss-born artist Johann Rudolf Byss, who was active in this city from 1689-1713. From Byss, Angermeyer inherited his distinctly precise attention to detail, and he quickly became well-known among the collecting aristocracy in the region for his painstakingly-rendered cabinet still-lifes, a genre that was particularly prized in Bohemia since the reign of Rudolf II.

Angermeyer’s exploration of the still-life genre included woodland still-lifes in the tradition of Otto Marseus van Schrieck and Matthias Withoos, trompe-l’oeil bird still lifes recalling the style of Jacob Biltius, and floral bouquets with visual roots in the oeuvres of Roelandt Savery, Jan Brueghel the Elder, and Johann Rudolf Byss. Although hunting still-lifes were traditionally executed on larger canvases, Angermeyer explored this particular theme in a smaller format, a scale that allowed him to preserve the size of the animals and paint them with great detail. Such examples were popular among Angermeyer’s prominent clientele, including Count Vrsovec, and works like the present pair would have adorned the walls of hunting lodges as records of the prized trophies of this aristocratic pastime.

In both of these paintings, the trophies of the hunt, a stag and a boar, are set atop a wooden table and against a dark background. Behind the head of the boar is a bundle of parsnips, and behind the stag is a head of cabbage. Surrounding both heads are oysters as well as several dead birds, including a goldfinch, a kingfisher and a few buntings, several of which anchor the foreground and are precariously perched along the edge of the table. Angermeyer’s refined and celebrated prowess is found in the careful brushstrokes used to render the bristles of the boar and the fur of the stag, as well as both of their soft, wet snouts. In addition to the brilliant colors of the birds, great detail was used for every element of each scene, down to the single fly in the foreground of one and the single feather in the other.

Many of Angermeyer's works entered important Bohemian collections during his lifetime, and today numerous examples by him are preserved in museum collections throughout Central Europe, including the National Gallery of Prague,1 the Belvedere in Vienna,2 and the Alte Pinakothek in Munich.3