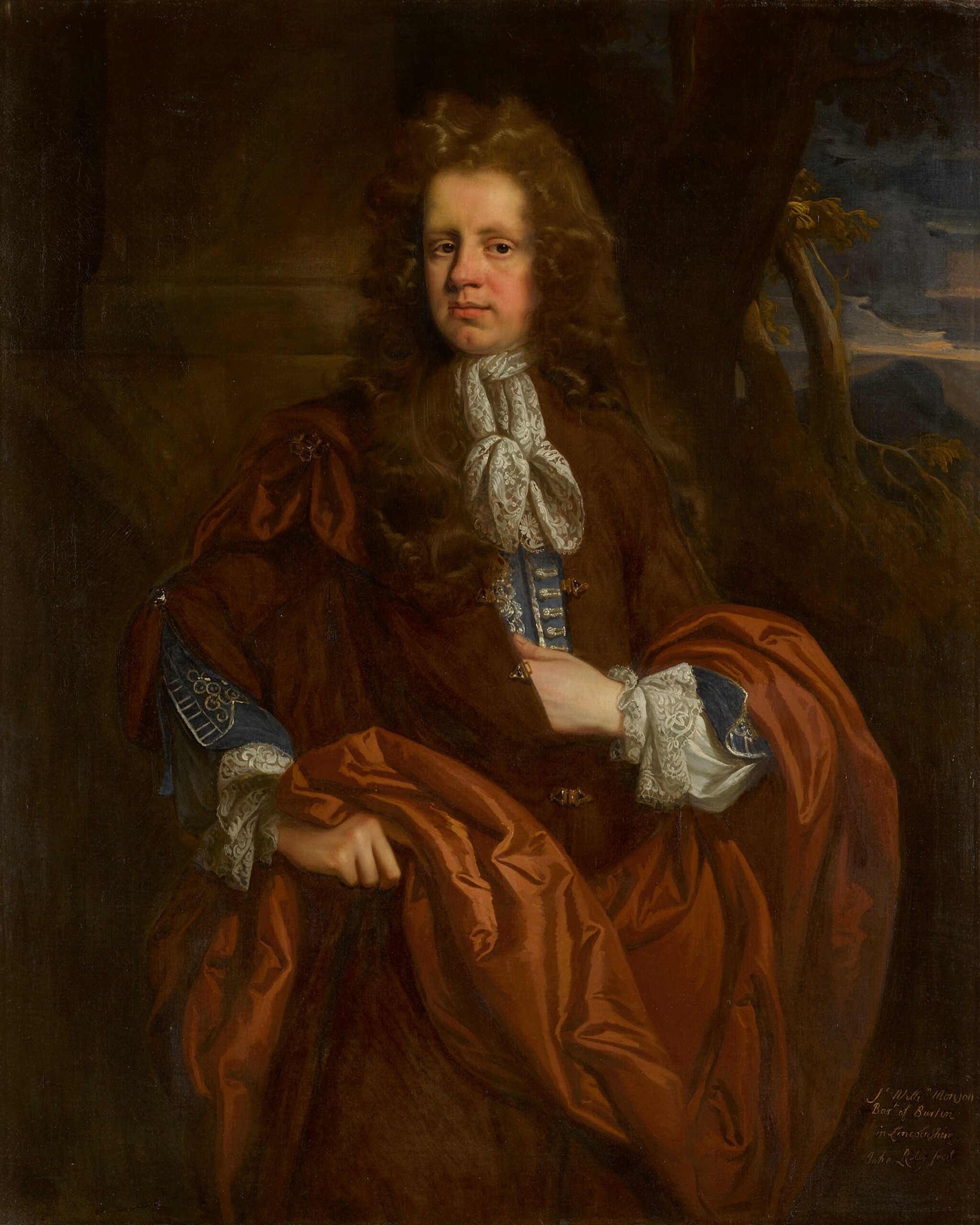 The canvas appears to be unlined, with reinforcements at the extreme edges, and on an old stretcher. The painting is in overall good condition and is ready to hang. The image presents strongly beneath a crisp varnish, and the sitter's face and parts of his costume, particularly his lace collar and cuffs and his blue doublet at his chest, are well preserved and retain some lovely impasto. A stretcher bar mark is faintly visible in raking light near the upper edge, and one small square of restoration in the column at upper left. Inspection under UV reveals a thick varnish, beneath which there may be an older campaign of restoration. Some broadly applied strokes of strengthening appear throughout the sitter's costume, primarily in the shadows of the folds, as well as a spot in the background to the left of the sitter at shoulder height. There are only a few thin strokes of retouching to craquelure in the sitter's face, with a few spots in his hair and in the sitter's hands. Some retouching visible at the edges of the canvas. Offered in a giltwood frame with decorative embellishments.

After the death of Peter Lely in 1680, John Riley became one of the leading English portrait painters. Trained under Isaac Fuller and Gerard Soest, Riley firmly established himself among fashionable clientele in the genre of portraiture and was celebrated during his lifetime by Horace Walpole as "one of the best native painters that has flourished in England." He excelled particularly in capturing the facial features of his sitters, which he rendered with a sensitive brush and truthful excellence. He is known to have painted James I and Mary of Modena, and in 1688, Riley and his contemporary Godfrey Kneller were appointed jointly as Principal Painter in Ordinary to King William III and Queen Mary. Riley often collaborated later in his career with John Closterman, and in his bustling studio, Riley welcomed Anthony Russell, Edward Gouge, Thomas Murray, and Johnathan Richardson, among others.

The fashionable sitter in this grand portrait by Riley is Sir William Monson, a prominent Whig politician in England in the late 17th and early 18th centuries. The second son of Sir John Monson of Burton, Lincolnshire (1628-1674), and Judith Pelham, Sir William Monson married Laetitia Poulett, the daughter of John Poulett, 3rd Baron Poulett, in July 1688. On 6 April 1718, he succeeded his brother, who had died without issue, as 4th Baronet. In the House of Commons, he represented Lincoln (1695-98), Heytesbury (1702-08), Hertford (1708-10), and Aldborough (1715-21). In addition to his political enterprises, William Monson attempted to establish a company of glassmakers in London and also took part in lead mining enterprises in Northern Wales.