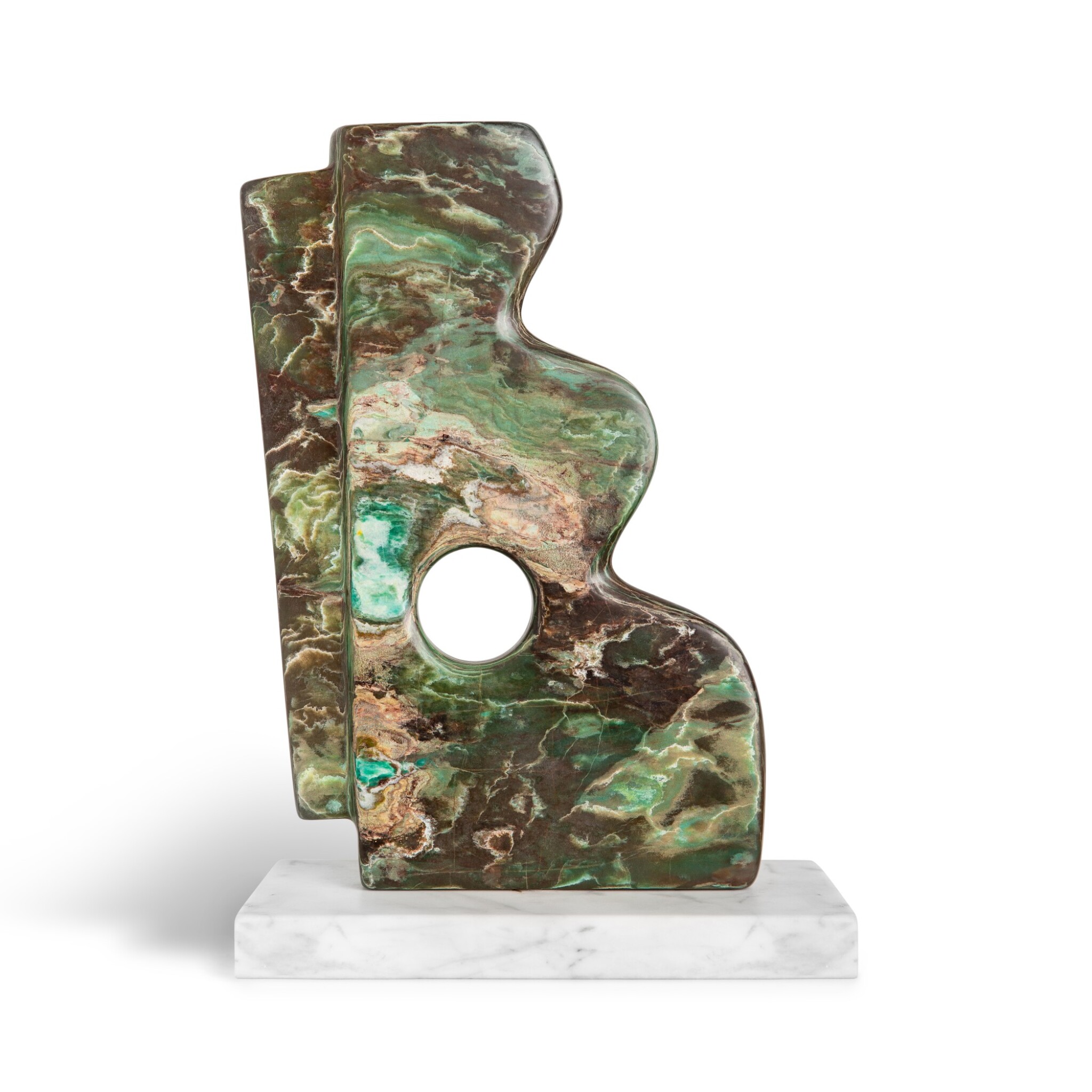 This work is in very good condition. Upon closer inspection, there is a very minor 1cm chip noticeble on the base of the work.

Sotheby’s is privileged to offer for this collaborative project, an exceptional sculpture by the renowned Jordanian artist Mona Saudi. Carved out of Jordanian Jade in 1998 and entitled Woman/River, this sculpture has a spectrum of tonalities, ranging from a dark brown to a vibrant green.

Mona Saudi’s obsession with the arts led her to pursue an independent life. At the young age of 17, Saudi left Amman for Beirut, where she had moved to become an artist. The Beirut of the 1960s was the centreof the Arab intelligentsia with a thriving artistic and literary community. Saudi’s first solo exhibition was held at Café de la Press in the winter of 1963 in Beirut. This exhibition would be a ground-breaking moment in Saudi’s life and artistic career, enabling her to fund her trip to Paris where she would go on to attend École des Beaux-Arts.

After her move to Paris, Saudi would progress to sculpture and explore themes such as birth, motherhood, fertility and growth in her work. It was in Paris, that Saudi would create her first work in stone in 1965.

In the present work, Saudi masterfully showcases the various hues and colors of Jordanian Jade, creating a remarkably striking sculpture. The title of the work alludes to two subjects, while the work itself uses characteristics that define both these subjects: rippling curves. Whether to define a woman’s body or a river stream, curves and soft bends can define them both. The sculptural form is precise in its execution, yet is not resolute in what it means to evoke – it allows us to decide whether embraces a woman’s curve or rather, alludes to a woman’s temperament as akin to a river.

This sculpture is a striking work by Saudi, an ode to her passion for the process and creation of meticulous form. Mona Saudi’s works are in the collections of leading international institutions including, Institue du Monde Arabe, Paris; the National Museum for Women in the Arts, Washington D.C.; the National Gallery of Fine Arts, Amman; Sharjah Art Foundation and the British Museum, London.

I shall sculpt for you two lovers

For what is found in the dream,

Man is the seedling of his own dream