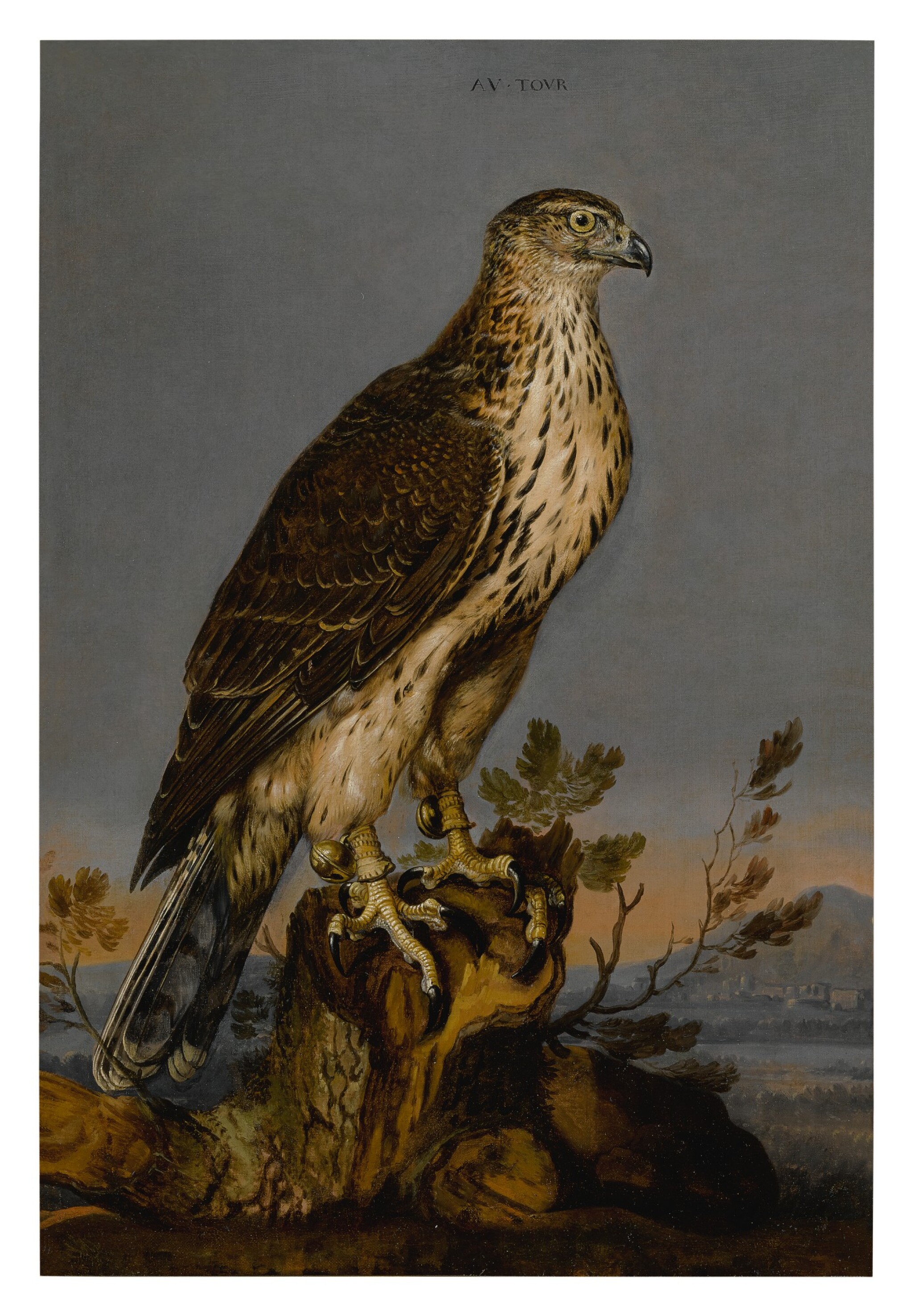 The canvas has been relined and is stable on its stretcher. Overall, the painting presents a strong, clear image and the Gyrfalcon makes a notable visual impression. The painting appears to have been restored relatively recently. The restorations and retouches appear to be largely concentrated in the background, and they have been well-applied. There may be some slight thinness to some of the darker shadowy details in the lower stump. Under UV: there are some restored thin seams and fissures to the canvas, which have been stabilized and retouched--one runs horizontally across the center, one along the lower edge, two in the lower left corner, and two in the upper left corner. Some spots of restoration fluoresce along the lower edge, in particular one restored repair the lower right corner. There is some feathery retouching in the sky and background, likely to address old craquelure and thinness, but this has been well-applied and gives the sky an even tone. One spot of restoration appears in the background above the gyrfalcon's head, one in its neck, and a few other small and scattered spots here and there in its body. No further work is necessary, and the painting is ready to hang. Offered in a molded dark frame with a gilt liner.

"This falcon is so carefully painted that it can be called a portrait, and it was probably a wealthy patron’s favorite hunting companion, as evidenced by the bells tied to its feet. The bird looks larger than life, as if surveying its territory."

This majestic portrait of a brown Gyrfalcon was painted by Carstian Luyckx, one of Antwerp's most accomplished 17th century still-life painters. Despite his distinctive style and technique, relatively little remains known of Luyckx's life. He trained under Philips de Marlier and Frans Francken III, and he is documented in Antwerp up until 1653, having been made a master in the Guild of Saint Luke in 1645. As some of his later paintings have French inscriptions, such as the present example, it is presumed that after this time he may have traveled south, though as yet there is no documentary evidence to support this.  As there are only two known dated pictures by him, it is difficult to establish a chronology for his oeuvre.  The sport of falconry, practiced since ancient times, was a pursuit particularly enjoyed at medieval and renaissance courts. The gyrfalcon, shown here, is the largest of the falcon species. In this detailed and beautifully rendered likeness, Luyckx's prowess is on full display, particularly in the way he balances light and texture to capture the varied intricacies and colors of the plumage. A similar degree of accuracy and impeccable detail is found in Luyckx's portrait of a colorful parrot in a still life of circa 1660.1

We are grateful to Fred Meijer for endorsing the attribution of the present lot and for suggesting that it is a late work, painted by the artist in France.