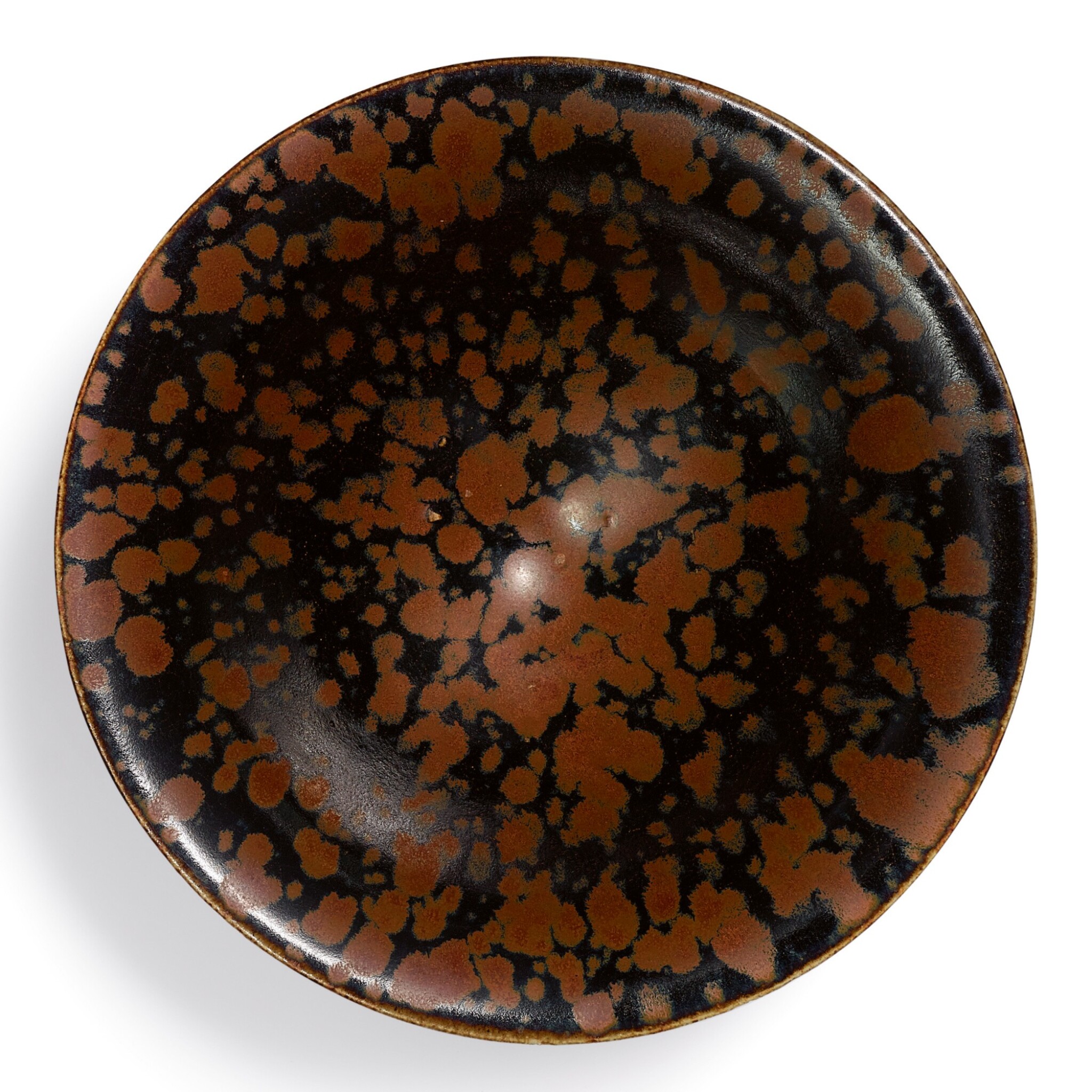 potted with a deep and subtly rounded body rising from a short foot to a flared rim, the interior covered with a glossy black glaze liberally and densely splashed with short russet 'partridge feather' mottles, the exterior covered in a persimmon glaze stopping neatly above the footring to reveal the pale buff stoneware body

The bowl is in good condition with just a very faint hairline crack to the rim measuring approx. 4 cm.

This bowl is remarkable for its captivating pattern of irregular russet splashes on the interior, which creates a striking contrast to the lustrous dark brown glaze. Known as zhegu ban, or ‘partridge feathers’, this pattern evolved from the experimental nature of Song dynasty kilns as they competed in producing wares for the thriving tea market. Bowls covered in a lustrous dark-brown glaze heightened the aesthetic experience of drinking tea, which at the time was energetically whisked to produce a rich white froth. The present bowl is a particularly fine example of its type, as it features small and evenly applied flecks, suggesting it was made in the Northern Song period. Stonewares coated in rich dark glazes began to be produced in large numbers in the Tang period (618-907), with the finest examples made at kilns near the Yellow River. The monochromatic glazes soon led the way to painted or splashed designs, which were achieved by either splashing or applying with a brush an iron-oxide slip over the glaze. In the kiln, the gravity would pull the slip downwards creating irregular splashes or streaks. Not only were these wares particularly suitable for drinking whisked tea, the serendipitous nature of their glaze must have captivated the imagination of Song literati.

The mesmerising ‘partridge-feather’ glaze was produced at many kilns in both northern and southern China, attesting to its popularity. Most examples were made at kilns that produced Cizhou wares, such as the Guantai kilns in Hebei province, the Qinlongsi and Dangyangyu kilns in Henan province. Bowls of similar form, recovered at Guantai, Ci county, are illustrated in The Cizhou Kiln Site at Guantai, Beijing, 1997, col. pl. 29, figs 1 and 3, pl. 65, fig. 1; and a larger bowl from Dangyangyu, the glaze similarly covering also the interior of the foot, is published in Series of China’s Ancient Porcelain Kiln Sites. Dangyangyu Kiln of China, Beijing, 2011, pl. 56.

Two bowls of similar proportions, from the Sheinman collection, now in the Arthur M. Sackler Museum, Harvard University Art Museums, were included in the exhibition Hare’s Fur, Tortoiseshell and Partridge Feathers. Chinese Brown- and Black-Glazes Ceramics, 400-1400, Harvard University Art Museums, Cambridge, cat. no. 38a and b; a bowl formerly in the collection of Lord Cunliffe, was included in Principal Wares of the Song Period from a Private Collection, Eskenazi, London, 2015, cat. no. 23; and a further similar bowl from the collection of Frederick M. Mayer, was sold at Christie's London, 24th June 1974, lot 55.